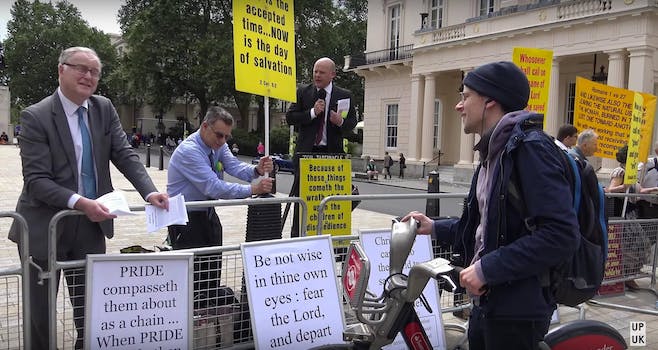 Pride month is wrapping up, with weekend parades occurring all over the world. While many are donning brightly colored outfits and taking to the streets to celebrate love in all its forms, some are donning suits and signs to promote a different message.

Every year, Protesters flock to Pride celebrations to try and be a wet blanket on the party atmosphere. Actor Jesse Eisenberg had the misfortune of coming across a group of protesters at London’s Pride festival on Saturday.

The protester asked Eisenberg if his “mind was closed,” to which he responded, “Is my mind closed? Dude, you’re so f*cked up,” before continuing on his merry way.

Eisenberg is in London performing in a play he wrote called The Spoils, Vulture reported. In an interview with The Guardian, Eisenberg mentioned how he was raised to value the importance of social issues and to “support people who are struggling”—a thoroughly open-minded way to view the world.