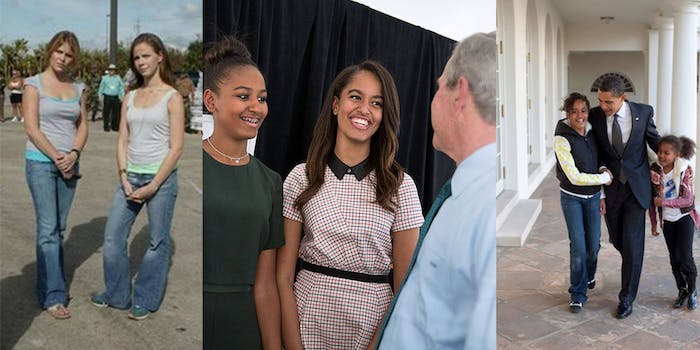 'Enjoy college. As most of the world knows, we did.'

President Barack Obama isn’t the only one we’re saying “farewell” to as he leaves the White House next week. Americans have also shared grand send-offs for first dogs Bo and Sunny, Vice President Joe Biden, and now first daughters Malia and Sasha Obama.

Their letter reflects back on the eight years Sasha and Malia have spent in the White House and traveling the world with their parents, but it also has an eye toward the future. The Bush daughters encourage their counterparts to “Explore your passions. Learn who you are. Make mistakes”—and, of course “Enjoy college. As most of the world knows, we did.”

Though their fathers have different politics and their times as first daughters were markedly different ages—the Bush twins were 7 when their grandfather was elected but 20 when their father was elected, compared to Malia and Sasha being 10 and 7, respectively—the letter proves there’s still a fair bit in common. Their bonds with White House staff, their ability to go out and “mak[e] positive change”—even the push to grow “beyond the shadow of your famous parents” is familiar territory. Jenna and Barbara close their letter with this touching show of support:

“[Your parents] will be rooting for you as you begin your next chapter. And so will we.”

The time-honored tradition of an outgoing president leaving his successor a note in the desk of the Oval Office is all well and good, but this is a new twist we could get behind too.

Read the full letter on Time.