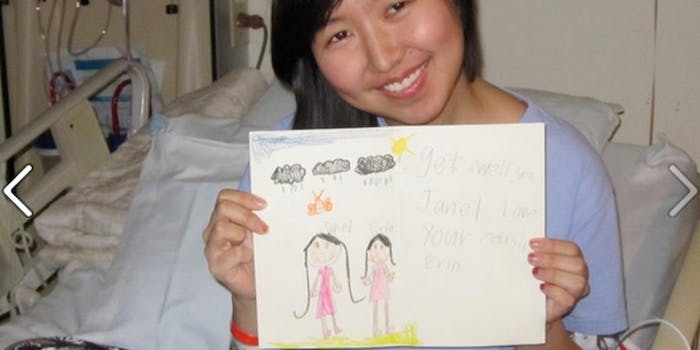 In January the leukemia patient pleaded to the YouTube community for help. Eight months later, she finally has a near-perfect match.

Remember Janet Liang? The 25-year-old girl who turned to YouTube to ask the world to help find her a bone marrow donor that would save her life?

“Yes! It’s true!” Liang, who’d spent her 20s living with acute lymphoblastic leukemia, wrote on her blog this summer. “I have found my ‘perfect’ match.’

“A truly generous and kind individual out there somewhere who matches me 9/10 has openly agreed to be my donor. Can you imagine that? That day has finally come.”

Liang received her transplant on Sept. 5 and is now set up at MD Anderson hospital in Houston where she’s readying another round of chemotherapy. Tami Lin, who’s helped run the ever-essential Team Janet support squad, told the Daily Dot that her friend’s making progress.

“I texted with her yesterday and she said she’s feeling okay,” Lin said.

“She’s in some pain when she tries to eat. All of her blood cell counts are really low. She won’t really begin to feel things for about two weeks. That’s when the grafting starts happening and the foreign cells start to get into her body.”

In the meantime, Team Janet’s new mission has become finding the Liang family some cash. Janet’s parents have temporarily moved from California to Houston to help their daughter recover, which cuts in to their savings and adds to their expenses.

Team Janet has set up a crowdfunding campaign to raise $8,000 for the family, money that will go towards living expenses like gas, hotels, and snacks.

“They’re going to be used at her and her parents’ discretion,” Lin said. “They have to move to Houston temporarily while she gets treatment; all the copayments for her medicine. Her transplant is covered by insurance, but she has a high premium that she has to pay. When she turns 26, she’ll get kicked off her parents’ insurance and have to purchase her own.

“We’re trying to build some sort of nest egg for her so that it won’t be completely overwhelming when that day comes.”

Team Janet’s already 60 percent of the way towards its goal with more than 35 days left to campaign. With support like that, one has to wonder why they’ve set their eyes on such a small figure.

“We’re being a little superstitious, too,” Lin said. “Eight is a lucky number in China.”