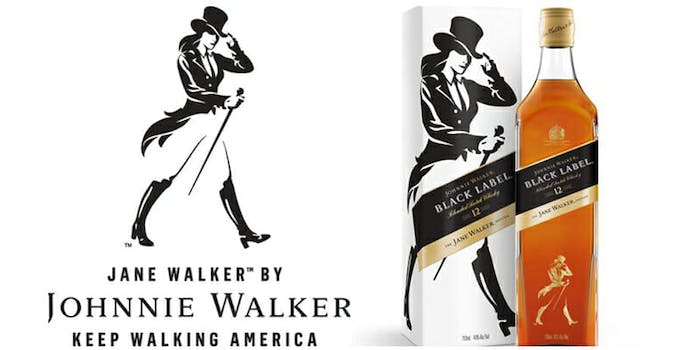 Perfect for washing down lady Doritos.

Good news, ladies. You can soon enjoy a glass of scotch with your women-friendly Doritos.

The maker behind scotch brand Johnnie Walker, Diageo Plc, will launch a limited-edition scotch called Jane Walker, Bloomberg reported Monday. Under the impression that women are too scared to try manly alcohol, the company wants to appeal to lady drinkers with a new label featuring a woman in a top hat and trousers.

“It’s a really exciting opportunity to invite women into the brand,” she said. “We really see Jane as the first female iteration of our striding-man icon. We like to think of our striding man and our striding woman as really walking together going forward.”

While it’s misguided to insist women need a label explicitly stating a product is for them (did no one learn from Bic’s widely mocked rollout of pens “for her”?), or that women don’t like scotch because they find it “intimidating” and not because it’s simply gross, at least the company will put some of its profits to good use.

For every bottle of the Jane Walker scotch made, Diageo will donate $1 to organizations that “promote women” like Monumental Women and She Should Run. The bottles will be in stores nationwide starting in March and go for $34 a pop.