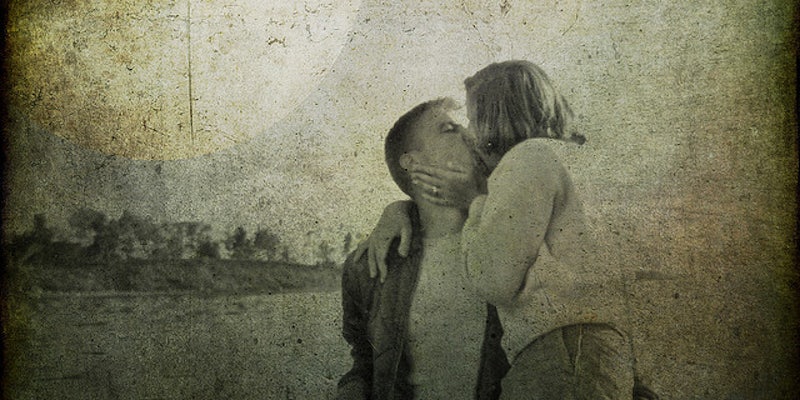 Jane Dates: Sometimes it goes the other way too

A sweet dating story from Jane to boost your romantic holiday mood.

I’ve spent the past few weeks regaling you with tales of weirdos and losers—and don’t despair, I’ll get back to that. But it being Christmas and all, I thought it would be nice to share a positive story. After all, as Patricia Arquette says in True Romance, one of the most romantic movies ever made, sometimes it goes the other way too.

I first messaged Delightful David solely because of his username, something I haven’t done before or since. His name contained a slightly obscure music reference—a musician that, as it happened, I was listening to when I saw his profile.  I wasn’t particularly wowed by his pictures and he was short, but I’m a music fanatic and someone getting musically cerebral with me constitutes an instant turn-on. When I saw his record collection a couple of weeks later, it made me a little faint. And that’s no euphemism.

Anyway, as music snobs tend to do, we evaluated each other by throwing out litmus tests, gauging how well we were going to click. He was a little light on mid-century jazz and I had some studying to do on ‘70s prog, but it appeared we were going to get along just fine. 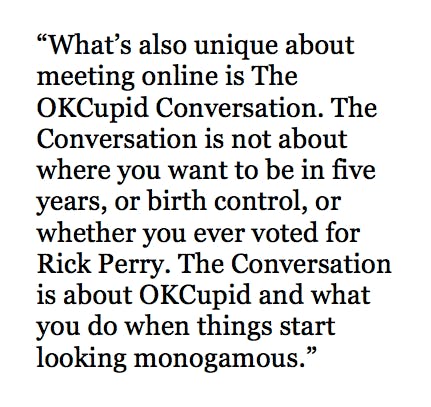 The night of our first date, my engine light came on as I was pulling out of the driveway (again, not a euphemism). There was no way in hell I was missing this date, so I laid out cash I didn’t have for a cab. Meanwhile, in my signs-from-the-universe kind of way, I wondered if someone was trying to tell me something. But the evening could not have been more worth it. It was the best kind of date; we talked for four hours about anything and everything. As we discovered mutual thinking on more and more topics, it led to an opening of the floodgates: what else had we been saving up to say to someone who got it? The ending of Lost, my divorce, his struggles to become a working musician, the inanity of Randy Newman all cycled into each other, creating one of the most thought-provoking and enjoyable conversations I’ve ever had. He offered to drive me home—“You’ve comfortably determined I’m not going to murder you, right?”—and gave me a gentlemanly hug at the door.

From there on, it just… worked. If I could explain it better than that, I’d essentially be de-mystifying attraction and could be on a yacht in the Mediterranean instead of writing this column. So you’ll just have to nod your head and smile as if you understand. Which you probably do, if you’re lucky. When you’ve been in a long-term relationship for much of your adult life, as I had, you forget how deliciously giddy a new romance feels. That first kiss, holding hands at a movie, the nervous anticipation before he comes over to pick you up. And yeah, that other first is pretty damn awesome too.

For all of you online dating skeptics, when a connection like that happens with someone you meet online, it becomes even sweeter. You wade through so many duds that it’s easy to forget why you’re doing this in the first place. To find out that there are indeed people on OKCupid that get you, people that are looking for the same things you are—it really does keep you going through all the freaks and losers.

But what’s also unique about meeting online is the OKCupid Conversation. The Conversation is not about where you want to be in five years, or birth control, or whether you ever voted for Rick Perry. The Conversation is about OKCupid and what you do when things start looking monogamous. It’s a tricky dance any time a date goes well, but even more so when you find yourself regularly seeing that someone.

Do you stop responding to messages on the site? Change your relationship status? Delete your profile? For Mr. Delightful and me, the answers were ‘yes,’ ‘yes,’ and ‘let’s not be too hasty here.’ The second action generally takes care of the first—once you change your status to “Seeing Someone,” your inbox dries up pretty quickly. Anyone who has the nerve to message you after that better be Jack White with an offer of marriage. The profile deletion, however, signifies a much larger commitment. I worked my ass off writing that thing, editing and adding to it after almost every date. We would need to be dating several months longer before that became a reality. Thankfully, it wasn’t something he asked of me, nor I of him.

And that turned out to be a good thing. As you can probably guess, since I’m still writing this dating column, it didn’t last. The ending was all very adult, which was refreshing. You grow more selfish, as you get older, in the sense of knowing what you need and refusing to settle for anything less. Delightful David is still a good guy; he and I have remained friends, though admittedly we don’t talk too often. It was simply a nice little adventure, one that introduced a witty, engaging new person into my life and gave me some rose-colored glasses for a couple of months. Pretty great, all things said.

And our relationship actually had a much larger benefit. That wonderful rush when it was working, really working: It proved to me that online dating is worth the effort after all. There are indeed normal, interesting, attractive people on OKCupid that don’t use naked torso shots as their profile picture. I credit that great stint with David for spawning all the rest of my positive OKCupid experiences. I hope he feels the same and that it’s gone the other way again for him too.