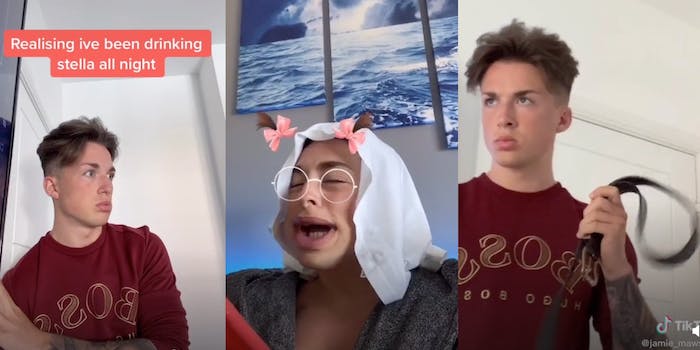 'Sad you get your likes making fun of domestic violence.'

A formerly banned TikTok user is receiving some backlash after joking about domestic violence in a video.

British TikTok user Jamie Mawson, who boasts about his ban in his bio, shared the video in question with his more than 55,000 followers.

The video begins with him entering a room and closing the door behind him. “Coming home to the mrs after a night down at the pub with the boys,” text across the video reads.

Mawson leans on the closed door and says, “Oh you little spastic!” to his “spouse,” who is also portrayed by Mawson. The word “spastic” is used as a derogatory term in the U.K., such as the r-word, and mocks cerebral palsy.

The spouse is seen wearing a white bonnet-like wrap around her head with a filter that gives her glasses and pigtails with bows.

“Oh, hi honey, hope you had a good night!” the woman says.

He then seems to come to a realization, and she asks, “What’s wrong?”

Text then appears across the video, reading, “Realizing I’ve been drinking stella all night.”

He then picks up a belt and whips it toward the screen, while a pained scream is heard ringing out in the background.

Some commenters criticized Mawson for making light of domestic violence.

“Sad you get your likes making fun of domestic violence,” wrote one. “I really hope nobody close to you has experienced this and watches your video!”

“Why am I on this side of tiktok also abuse isn’t funny,” commented another.

Another person sarcastically wrote, “abuse is so funny.” However, they received some rude comments by Mawson’s fans in response, such as “look at your self.”

In the past, Mawson made a poll asking whether all women should be killed. He answers “yes” twice. And in another video, he hints at raping kids.

Most of Mawson’s followers find his content funny, labeling it as dark humor, and seemingly miss the point about why jokes about rape, domestic violence, and the killing of women are anything but.