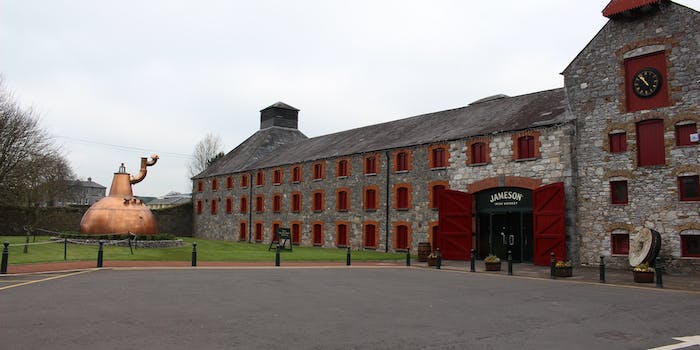 I got schooled at the Jameson Distillery

Step inside the classroom at Jameson’s Irish Whiskey Academy, where innovation and tradition collide.

As we celebrate with all of our friends who make St. Patrick’s Day great, we raise a glass to Jameson for sponsoring this story.

The small Irish town of Midleton lies 22 kilometers east of the Cork city on the southeastern edge of the island nation. The Jameson Distillery sits just off the main road through the town, with lean, sharp streams of smoke billowing up into the wind marking the plant’s location.

On the distillery grounds, the upper floor of an 18th-century miller’s house converts into a comfortable, bright classroom. The building hinges between Jameson’s Old Midleton Distillery—preserved as an experience that guides visitors through the history and process of Jameson’s whiskeys—and the modern New Midleton Distillery that today serves as the sole producer of Jameson exported around the world.

In the classroom, Dave McCabe, who runs Jameson’s Irish Whiskey Academy, scrawls quickly across a triptych of sliding blackboards, outlining how the centuries-old process of the former distillery has been scaled through the technology of the new plant. He explains how each of the brand’s whiskeys derive their unique tastes, and the balance between preserving the heritage of the recipe and the modern capabilities. Little of that original process has actually changed. 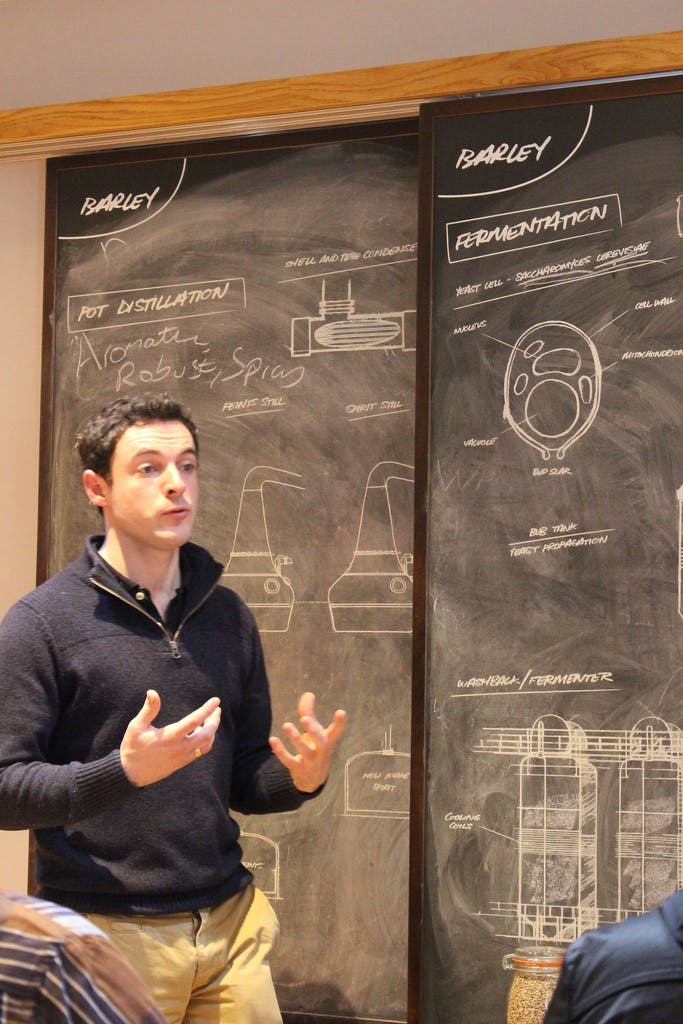 At 28, McCabe is young for his expertise, but he boasts a lifetime’s worth of whiskey knowledge. The Irish Whiskey Academy, which Jameson launched just last year, attempts to preserve and pass on that tradition through its rigorous, hands-on course educating bartenders, brand ambassadors, and aficionados. 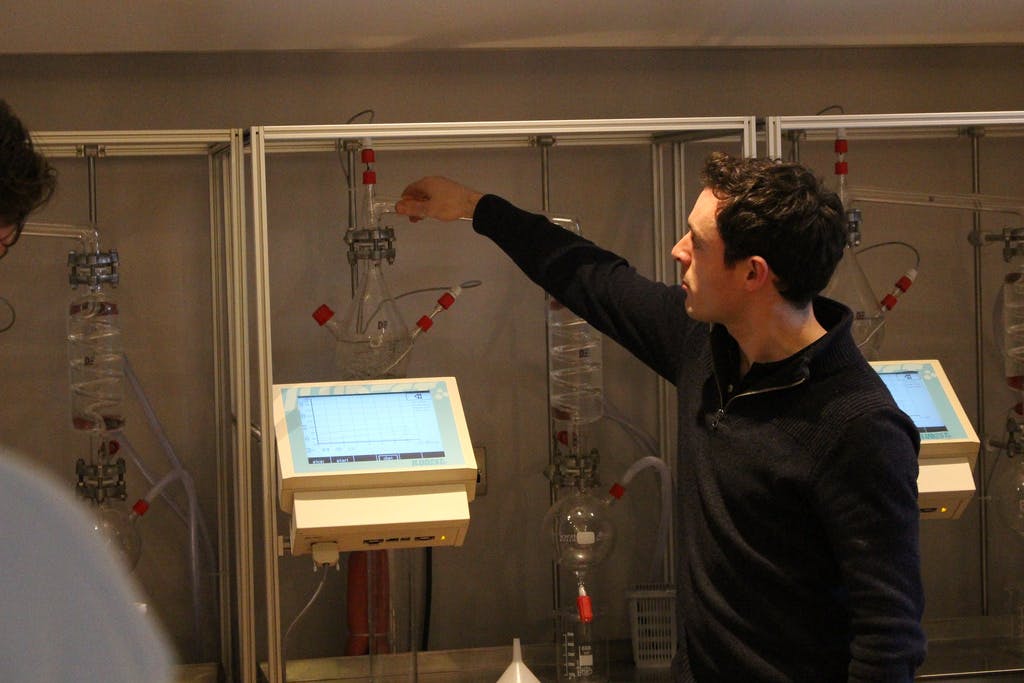 The distilling process demonstrated in the Irish Whiskey Academy.

What becomes clear throughout the crash course is that whiskey is as much art form as science.

Much of the Old Midleton Distillery is preserved as it stood a century ago, from the water wheel powered by the Dungourney River that ground the barley and corn to the coal-fed furnace room underneath a large copper-pot still that boiled the alcohol from the fermented wash. The scope and labor of the process seems daunting.

The distillery nonetheless feels more like a museum than factory, save for one small building tucked into the corner of the property. The cooperage remains in use, and stepping through the sunken door frame reveals a bunker of tools and equipment and wood. 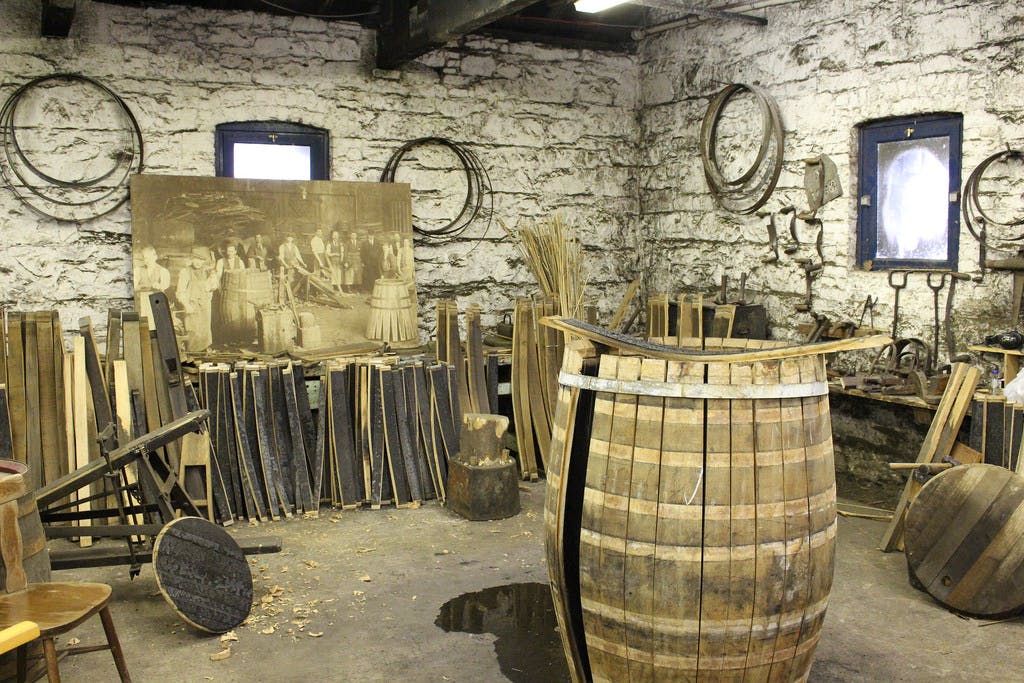 This is the domain of Ger Buckley, a fifth-generation cooper and one of only four master coopers remaining in Ireland. Buckley is stout and energetic, and his personality seems as seminal to the Jameson experience as his craft.

Buckley’s tools splay across the workbench behind him, tools unique to the trade and passed down from his own forefathers. As he shows of his adz, hammers, compasses, and specially curved knives and saws—each still used by the master cooper today—the distinct pride in the tradition of his craft comes through. 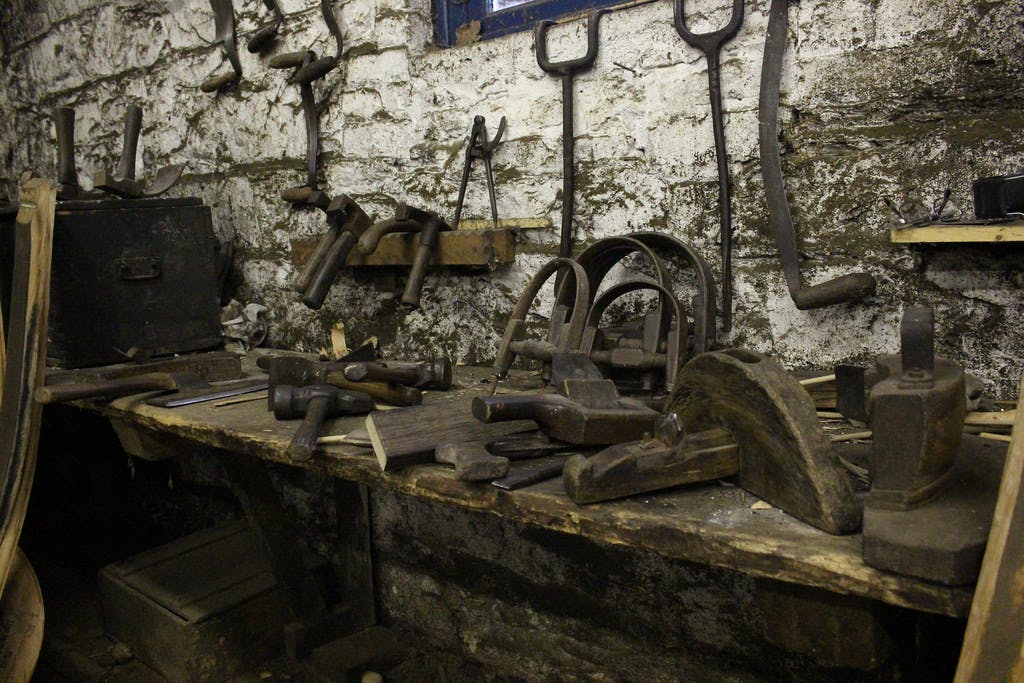 Jameson doesn’t build any of the barrels that they use to store their whiskey, but instead defers to previously filled casks imported from mostly American distilleries, almost 150,000 per year. Whereas American distilleries must use only new oak barrels, Jameson is able to recycle them and achieve a uniquely aged flavor that reflects what was previously stored.

Buckley repairs the barrels that come in, replacing staves and refurbishing them, but his expertise in understanding the influence of each cask’s unique flavor may be his most important role. Buckley claims that up to 50 percent of a whiskey’s flavor comes from the cask in which it was stored. Sherry butts from Spain, port pipes, and American bourbon barrels each carry its own distinct qualities that inform the final Jameson product.

Buckley eassembles a cask. GFY by A Thing I Do

Anticipating the effect of each barrel on the whiskey it stores requires a mixture of handed-down experience and scientific understanding. Charred oak barrels, for example, provide a richer, caramelized tone because it breaks down the sugars faster. Thus Jameson’s special Black Barrel label, a mix of sherry and bourbon barrels re-casked and aged longer in a charred oak barrel, emerges with a creamy and sweet complexity.

Just as Buckley, surrounded in his workshop by the varieties of barrels and tools, represents the living and working tradition of Jameson’s process, the New Midleton Distillery emphasizes the innovation of the whiskey brand.

On the opposite side of the Irish Whiskey Academy, the new facility contrasts the old in a gleam of steel and chrome and the glass-fronted building housing three towering copper pot stills. The smell of alcohol hangs thick in the air and the tree bark around the grounds is blackened from years of soaking in the ambient vapors. Touring each building, from the grain bins to the massive mashing tubs to the copper pot stills, the process remains almost exactly the same—simply scaled in size. The same locally sourced ingredients and water provide the raw foundation for the whiskey, while Jameson’s triple-distilled method achieves the whiskey’s hallmark smooth taste.

What’s strikingly different is the maze of pipes winding overhead between the buildings. Inside the cavernous room housing the three stills (with space for a planned expansion of three more to double the output), McCabe shows off the distillery’s control panel on a computer. Everything within the new distillery is linked and closely controlled through the system, each step of the process monitored and capable of being adjusted at any point.

Behind the computer, a sampling station allows testers to quickly pull a beaker full of liquid  from each of the stills for testing, ensuring quality through every portion of the process. It appears as much a lab as it does a plant.

Innovation at the new distillery extends beyond the technology as well. Jameson houses an lab where experts can test new methods, blends, and effects. The slightest changes can impact taste, so Jameson’s process has become a balance of accuracy and experimentation.

Being able to anticipate the effects of even the slightest tweaks is crucial, as the final product requires years of aging. By law, Irish whiskey must be aged at least three years, and many of Jameson’s whiskeys age far longer. 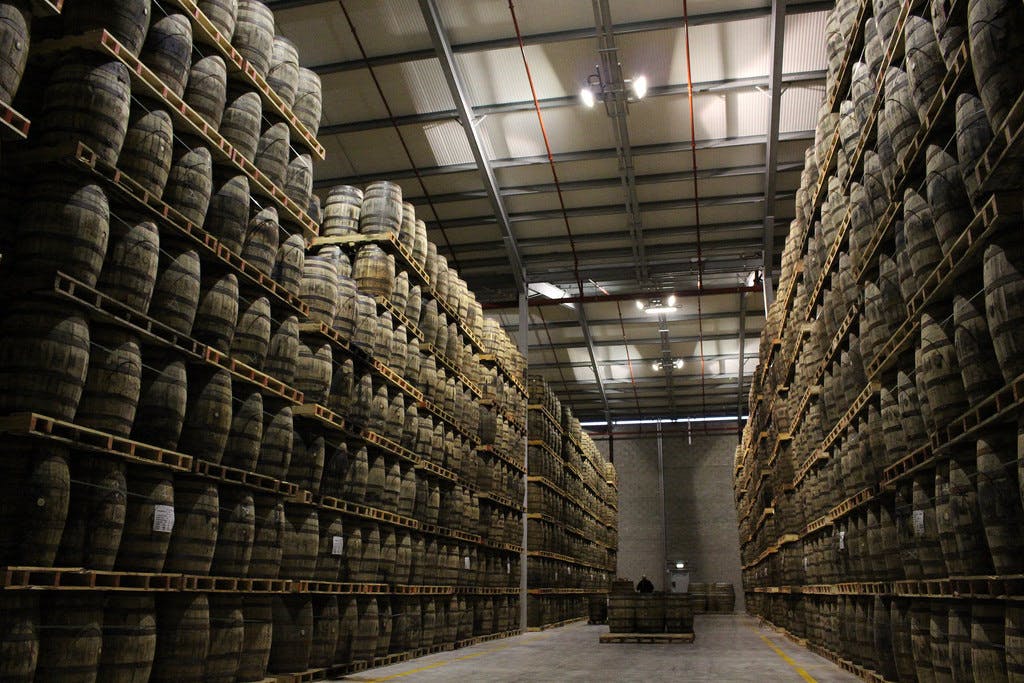 On the edge of the distillery grounds, rows of generic concrete warehouses stretch out in a seemingly boundless grid. Within each, 33,000 barrels are stacked in staggering yet precise blocks, all filled with Jameson whiskey in various stages of aging.

The warehouses emphasize the sheer scope of Jameson’s production and also the necessity of patience. The full process can take decades before the whiskey is ready to be tasted, but it’s centuries in the making.

Ultimately a product is only as good as the people who make it, and Jameson is made by real people, for real people. The care that goes into each bottle ensures every glass is warm and hospitable—whether its neat, mixed, or on the rocks—just like those who enjoy it. There is hard work and humanity behind every smooth ounce.

Jameson lives beyond St. Patrick’s Day through traditions held by groups of friends around the world. At family reunions and local dive bars, band practices and parties, in the happy hours and in the wee hours, Jameson brings people and communities together all year round.