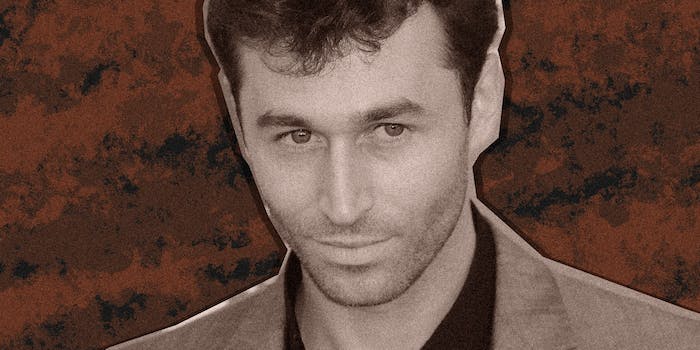 Deen and his production company are nominated for a combined 20 awards between the two shows, including Male Performer of the Year in both. Deen said in a press release, “I love making adult films and always will. It is extremely satisfying to see that my labors of love have been acknowledged by the powers that be at both organizations who specialize in judging adult entertainment.”

He’s dead on the inside and dead to me . He’s literally the worst person I’ve ever met . That’s all I’ll say for now #solidaritywithstoya

The accusations initially had major ramifications for Deen. Kink.com cut ties with the actor, and updated its rules to make it easier for models to report harmful incidents. His advice column for the Frisky was axed, with editor Amelia McDonell-Parry explaining, “No amount of good rapport between us or traffic to his columns would EVER supersede the fact that I BELIEVE WOMEN.” It also appeared that the feminist sheen had worn off his image, and that those who had flocked to him for his wholesome, nice-guy shtick were ready to believe his accusers.

But just a few months later, Deen was back on top again. In fact, Deen has produced 29 films in the past year, and plenty of studios are still willing to work with him. “It was clear to everyone in the adult industry that this [the sexual assault allegations] was nothing but media sensationalism,” a Deen spokesperson told the Daily Dot.

“It was natural for there to be a lot of knee-jerk reaction,” regarding the nominations, XBIZ president Alec Helmy told the Daily Dot. “But the fact is, to date, he has not been charged with a crime and therefore we must do the right thing and assume innocence. And it seems many feel the same way because James Deen continues to be one of the most active performers in the business today.”

That none of the women have brought charges against Deen is common: Often, sexual assault victims don’t the believe anything will come of their case, they fear of lack of evidence and reprisal. That fear is also amplified if the accused is a coworker. In any industry, there is the risk that the accuser will be penalized, and if you’ve already gone through the trauma of assault, many victims fear added trauma of being suddenly unemployed. It’s not hard to see how this could have played out with Deen—the critical darling studios would be reluctant to cut ties with, no matter how harsh the accusations or famous the accusers.

Deen is not alone in having a thriving career despite accusations of violence. Johnny Depp, Casey Affleck, R. Kelly, Woody Allen, and many more celebrities have been accused or found guilty of rape, domestic abuse, and sexual assault, and continue to work. Which is not to say rapists or accused rapists should be banned from working for the rest of their lives. Only that the accused have a long history of not facing consequences or even scrutiny, while the accusers are ignored or publicly condemned.