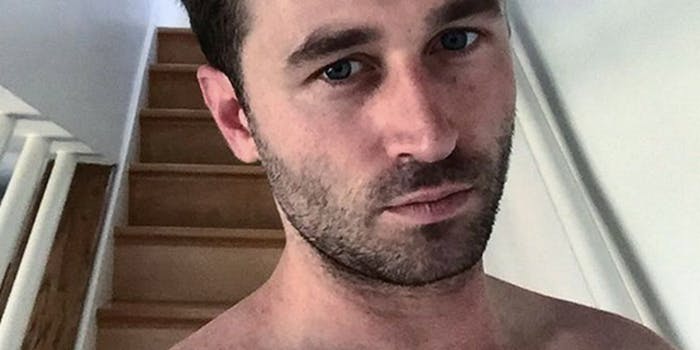 Here’s what James Deen has said about consent

When Cosmopolitan Australia asked Deen whether the secret to good sex was being yourself, he made similar remarks. “Being yourself is definitely important, but I always think that communication is a little more important,” he said. “Being able to communicate to other people about what you’re into and find out what they’re into is going to help your sexual experience. Sex isn’t something you do to someone, it’s something you do with someone.”

It’s tough to read a statement like that and compare it to Stoya’s claim in her tweets on Saturday that she used her safeword and he ignored her. Or what Lux wrote in the Daily Beast happened to her: Deen asked twice whether she’d like to sniff his testicles: “I replied with a firm ‘No,’ in order to establish my boundary—which James then disregarded by grabbing me by the throat and shoving me down onto a mattress on the floor.”

It also doesn’t in any way conform to porn performer Ashley Fires’ claim that Deen “almost” raped her. “I was getting out of the shower of the communal bathroom at Kink, I reach for my towel to dry off, and he comes up from behind me and pushes himself and his erection into my butt,” she told the Daily Beast. “He pushes me against the sink and starts grabbing on me and I was like, ‘No, no, no James, no,’ and he released me from his grasp, and says, ‘You know, later if you want to fuck around I’m in room whatever-it-was.”

In a series of tweets on Sunday night, Deen called the allegations against him “egregious,” as well as “false and defamatory.”

In a November 2014 piece in The Daily Beast, Deen spoke out against laws regarding affirmative consent on college campuses and made inappropriate comments to the reporter, Emily Shire, by telling her the completely unsolicited statement, “You’re pretty and nice, but I wouldn’t have sex with you.” He then “teases” her by asking if their interview is “secretly a date?”

In that same interview, Deen argued against “yes means yes” laws, like the the one which was signed into law in California in September 2014, stating: “Lack of protest or resistance does not mean consent, nor does silence mean consent. Affirmative consent must be ongoing throughout a sexual activity and can be revoked at any time.” Deen told Shire:

“That is the dumbest fucking law I’ve ever heard of. We already have a law against rape. Just don’t fucking rape people. My mom tried to persuade me on it and told me about the coverups on college campuses. We can’t throw a law at it and think it’s going to solve it.”

To be clear, Deen’s past statements neither prove nor disprove any past behavior. Taken in aggregate, however, they do paint a picture of the mindset of a man who has been accused of sexual assault by three women so far.

The Daily Dot has not received a response for repeated requests for comment by Deen’s representative.