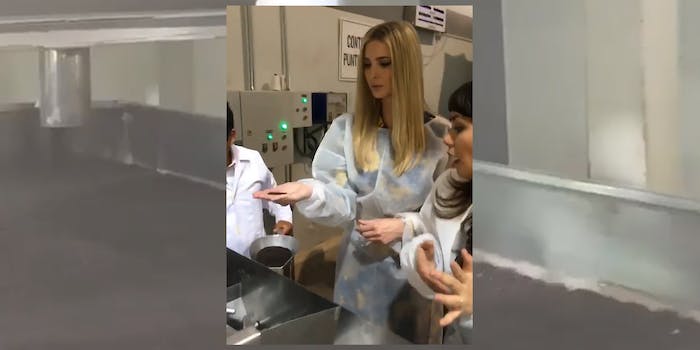 Ivanka Trump likes two things, she would have you believe: empowering women and quinoa. Luckily for her, she was able to combine both with a timely trip to a quinoa factory in Peru.

Trump’s visit is part of her women’s economic empowerment tour in Latin America that coincides with the Summit of the Americas conference this weekend, the Cut reports. But any goodwill that Trump has to women in South America was quickly lost during her quinoa tour, which seems to have very little to do with empowerment beyond helping the middle-class-plus women who follow her on Instagram understand how quinoa is processed.

Ivanka Trump is in a quinoa factory in Peru: pic.twitter.com/qMRzEU3yST

Twitter quickly wondered aloud why American taxpayer dollars are sending Ivanka Trump over to a factory to learn about quinoa.

Ivanka's caption makes it seem like she might not realize that quinoa is a grain. Like, there's just a factory in Peru that manufactures all the quinoas. Probably with robots. https://t.co/PyaklK39vF

Why are we even spending tax payer dollars to send this useless "adviser" around the world where she will accomplish absolutely nothing?

Ivanka Observes Quinoa   https://t.co/7ZYfxvAX28 via @jezebel shes walking around like a model telling everyone shit she lives in an ivory tower supplied by daddy

There’s also the fact that quinoa has a dark side. Quinoa’s price started dropping back in February 2014 and reached pre-2012 levels by 2016, showing that quinoa is a food susceptible to the market’s whims, according to one report from NPR. Trump’s Instagram story doesn’t talk about that, though.

Oh no, she's already on the second phase. WHAT IS SHE MAKING?? pic.twitter.com/xQHFzafgpQ

Ivanka Trump seeing how quinoa is produced is the whitest thing to happen this week.

The stop comes shortly after a visit to another feminist stronghold, the Lima Stock Exchange. Meanwhile, Trump is set to unveil a new White House initiative for women’s rights at the Summit of the Americas. Hopefully, there, she’ll shine a light on yet another vegan food.