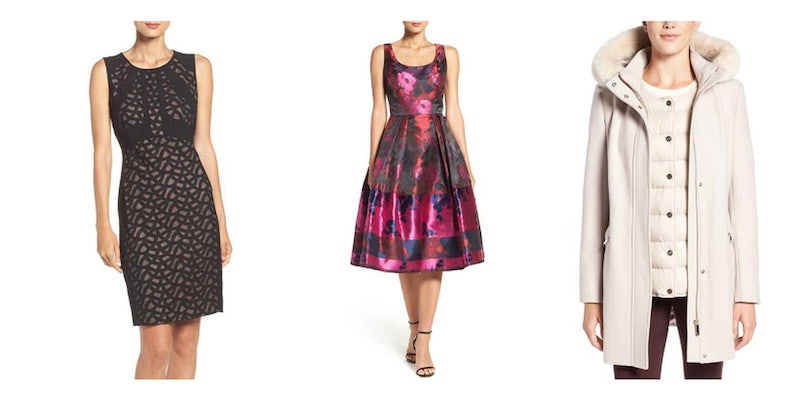 Does she deserve it? Or is she being unjustly punished?

In an ongoing response to Donald Trump’s comments about grabbing women, a new movement is choosing to target his daughter, Ivanka. The #GrabYourWallet boycott, started by Shannon Coulter a few weeks ago, asks that participants boycott Ivanka Trump’s clothing lines and contact retailers to tell them to stop carrying her brands.

Updated list. Now includes Marshalls. If you'd rather not see the name "Trump" anymore while you're shopping, call these stores. Tell them. pic.twitter.com/4xXkGcqU4X

Coulter told the Guardian that she targeted Ivanka because she couldn’t believe she would continue to support her father. “If Ivanka Trump had distanced herself from the campaign, I would not be boycotting her,” Coulter said. “But something changed for me when that tape was released.”

Here is a FULL list of all stores who carry Trump products that we will boycott until they hear us: https://t.co/0azW8NZRW6 #GrabYourWallet pic.twitter.com/B1qD1hzIYE

Dear @JeffBezos, Please note that because you carry Ivanka Trump's garbage on @Amazon, I'm boycotting ALL of Amazon! #GrabYourWallet

The Daily Dot has reached out to a few of the larger retailers on Coulter’s list to see if they have any plans of dropping the Trump brands but hasn’t heard back as of this posting. The Trump name, in general, has been in danger of losing business lately. People are embarrassed to live in his buildings, his hotels are empty, and people are giving up his products. However, this boycott is not asking people to stay away from Trump hotels or to sell their Trump condos. It almost entirely goes after his daughter and her business.

While there is no ethical consumption under capitalism, most people like to try. Boycotts assume that you can vote with your dollar, and with enough pressure, sometimes they work. After all, if nobody is going to buy a brand, there’s no reason for a large retailer to stock it.

But, as always, boycotts are for those who have the privilege to participate in them. Ivanka Trump’s clothing is not the most affordable (a shift dress costs around $150), but it’s carried in stores that often offer bargains. On Coulter’s list of alternative stores, just one (H&M) could probably be considered a place where you could find cheaper clothing. The rest, such as J.Crew, Banana Republic and Everlane, are certainly higher-end. So while many women could easily go the rest of their lives without buying a single Ivanka Trump item, it’s considerably harder not to shop at big-box retailers unless you have the means to look elsewhere.

The boycott also brings up the issue of why Ivanka specifically is being targeted, rather than just her father. Ivanka Trump has been accused of stealing designs, using foreign factories with sweatshop conditions, and not offering employees fair benefits. These are all reasonable things to boycott a company for, and also things that plenty of brands have also been accused of doing. However, her line isn’t being boycotted for any of those reasons—it’s because of her father’s comments and her ongoing support of him. And while Trump’s other children have certainly come under fire for their support, nobody is asking for a boycott of Eric Trump’s Trump Wines so vocally.

On the other hand, Ivanka Trump has certainly put herself in this position. Instead of sitting on the sidelines, she has been an active participant in her father’s campaign, speaking at the RNC, defending his platforms to the press, and even using her brand to lend her support. She is more than just his daughter, she is his female mouthpiece. Combine that with her having the largest selection of physical goods to not buy besides those tagged Donald Trump, and you have a person ripe for boycott. Because if voting with your dollar means anything, it means not giving money to people who vocally disagree with you.

Maybe Ivanka Trump is supporting her father for her own political gain. Maybe she’s doing it because she honestly believes in his candidacy. And maybe she’s doing it because he’s her father and she loves him in spite of almost everything about him. There are many reasons to boycott Ivanka Trump’s brands. But if that’s what you want, make sure you’re also boycotting the man who said the awful things, instead of just the woman who supports him.