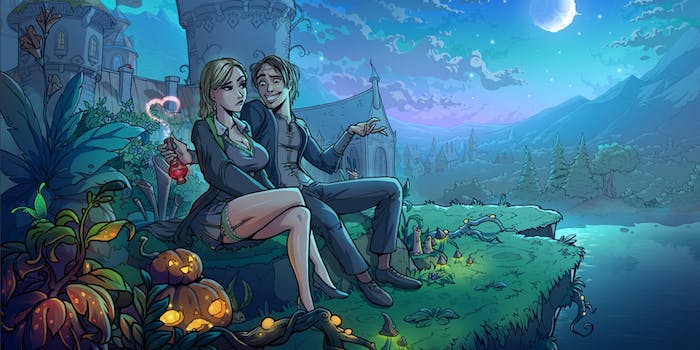 “The fun isn’t always in getting it right, but in getting it wrong together—jamming your fingers on all the keys and yelling I don’t know what I’m supposed to do to make you come but I’ll keep trying!” Kotaku’s Kate Gray wrote.

After Class is a natural recommendation for two of the internet’s most popular (and controversial) niches: furries and yaoi fans. In this gay visual novel, players star as a college student who has “just moved to the city for a fresh start” and makes friends with a wide range of characters. As it turns out, the cast seemingly resurrects a forgotten dream inside the main character, pushing forward the story’s plot.

Developer Andy “andehP” Peng is behind the game, which promises five main characters to meet, interact with, and romance. The game teases that “every choice you make has its consequences” and will “change the outcome of the story.” Demo builds are available for free on itch.io, although Peng’s Patreon subscribers receive access to WIP releases and new updates a little sooner.

As this reporter wrote for Fanbyte in June 2019, Hardcoded captures “sapphic desire between trans women” in a way that celebrates trans women’s bodies for their transness, not in spite of it. The game’s demo is available now on itch.io, and Hardcoded’s Patreon backers receive periodical work-in-progress builds for the full game.

Platformer Lewd Leaf Land went live for the aptly-titled Lewd Jam 3, and it has remained one of the best adult games on itch.io ever since. Developed by AheGames, Lewd Leaf Land casts players as Molly, a sleepy tanuki looking for maple leaves to brew some tea. Once she has at least 24 leaves, players receive their very own “lewd reward” for their hard work. The game includes three dozen leaves to collect and two 18+ routes. With a variety of adult illustrations, “bouncing tanuki tits,” catchy music, and ridiculously hot sex scenes, Lewd Leaf Land is a stellar adult game in its own right.

But unlike many of the titles on our top recommendation list, Lewd Leaf Land isn’t just for playing with one hand. The game features a beautiful art style and challenging platforming segments that test players’ reflexes. Besides purchasing the game on itch.io for $4, AheGames also runs a Patreon where fans can receive bonus sketches, unreleased music, WIP game builds, and more. The studio also has a free demo available on itch.io for curious players.