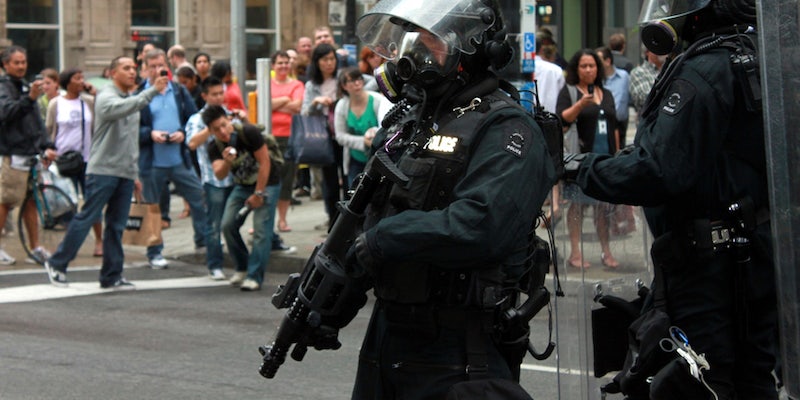 A quick legal guide to filming police with your phone

The Constitution is on your side.

Can you film a cop with your phone?

The question is particularly poignant this week, which saw Americans gather in Ferguson, Mo., the latest part of the country where police have shot and killed a young black man who witnesses say was unarmed. Protests erupted. Journalists were arrested. And unnumbered citizens caught heavy-handed police activity on cellphone cameras and livestreams.

In short, you never know when you might feel the need to film police activity. So, can you?

The short answer is, yes: It’s completely legal, provided you’re in public and not breaking any laws. Cops may not always treat it as such. But courts do.

The American Civil Liberties Union, which boast its successes in defending clients who filmed police officers on duty in public places, stresses the legality of filming police on duty on its website.

In August of 2011, the U.S. Court of Appeals for the First Circuit in Boston affirmed the ACLU’s lawsuit, on behalf of Simon Glik, who in 2007 was arrested by three Boston city police officers for standing approximately ten feet away and using his camera to film this video of them arresting another man in a park. That ruling was significant, as the circuit judges found that smartphones allowed nearly anyone to functionally be a newsgathering member of the press, protected by the First Amendment:

The proliferation of electronic devices with video-recording capability means that many of our images of current events come from bystanders with a ready cell phone or digital camera rather than a traditional film crew, and news stories are now just as likely to be broken by a blogger at her computer as a reporter at a major newspaper. Such developments make clear why the news-gathering protections of the First Amendment cannot turn on professional credentials or status.

The U.S. Department of Justice has echoed this sentiment in reference to the case of Christopher Sharp v. Baltimore City Police Department. In that case, the BPD allegedly forcibly grabbed Sharp’s phone and deleted, among other things, video he’d just taken of officers beating up his female friend. (It’s “allegedly” because the case was eventually settled out of court; the BPD wrote to Sharp that it “would like to apologize for any inconvenience, loss or damages you believe you suffered,” and ponied up $250,000.)

The DoJ, however, doesn’t mince words. As it wrote to the BPD, citing Glik’s case, “Recording governmental officers engaged in public duties is a form of speech through which private individuals may gather and disseminate information of public concern, including the conduct of law enforcement officers.”

Officer literally just asked me if I want to get shot (for taking a photo of all things…) No thanks for asking, I’ll pass. #Ferguson

But the law is firmly on the side of the right to film public servants in public places, though it’s important to note that photography isn’t an excuse to engage in other illegal activities, like trespassing or interfering with law enforcement operations.

And remember: Even if you do get arrested, police still need a warrant to search your phone.

Photo via Chris Huggins/Flickr (CC BY 2.0)