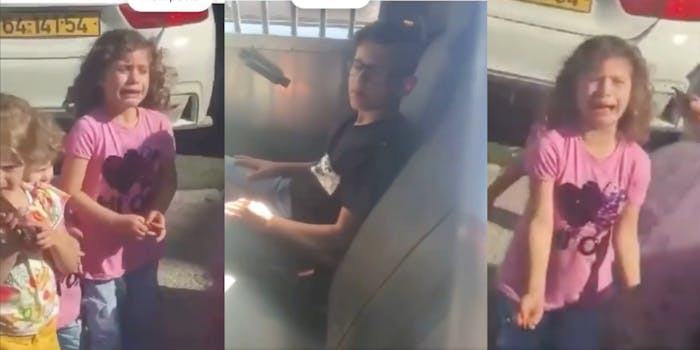 They reportedly laugh while the girl is crying in the video.

A video that reportedly features Israeli police arresting a 10-year-old boy while his little sister sobs and pleads with them has gone viral on social media, with many speaking out against the police’s actions.

In the video, the little girl reportedly tells the police: “Stop, Stop. We swear we won’t do it again.” Her brother, Mazen Bassam, was reportedly being arrested and taken into detention in Beit Hanina for allegedly throwing stones, according to Scroll. He was reportedly eventually released.

Israeli police, according to AhlulBayt News Agency, laughs off the girl’s tearful pleas in the clip.

The video has since gone viral as people online condemn the actions of the police.

“As an Israeli, am I supposed to see this and feel safer?” one Twitter user questioned, garnering over 17,000 retweets.

“I don’t care what side you are on. This an embarrassment to humanity,” another said.

Rep. Rashida Tlaib (D-Mich.) pointed to the video as a reason why legislation seeking “to prohibit U.S. military aid to Israel being used to destroy Palestinian homes & to detain + torture children” should be passed.

The bill in question, H.R. 2590, would prohibit Israel from using “United States taxpayer funds” for “the military detention of Palestinian children, the unlawful seizure, appropriation, and destruction of Palestinian property and forcible transfer of civilians in the West Bank, or further annexation of Palestinian land in violation of international law.”