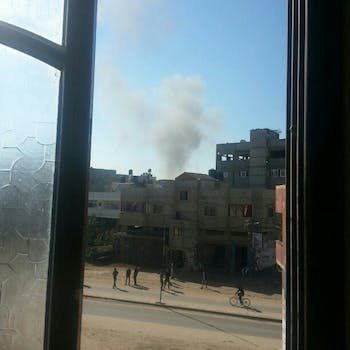 Twitter may have temporarily suspended the Israel Defence Forces’ (IDF) official account Thursday after it provided a number of updates on the Gaza Strip conflict that escalated 24 hours before.

The IDF used the @IDFspokesperson account to first inform the world of a military action in the Gaza Strip and provided updates as militant groups launched rockets from Gaza into Israel and the Israeli navy targeted a number of sites in Gaza.

The @IDFspokesperson and @alqassambrigade (Hamas’s military wing) accounts sparred on Twitter Wednesday as both sides tried to dominate the media narrative and inform the public of events in Gaza from their perspective.

As of 9am ET Thursday, 15 Palestinians (including children) and three Israelis have reportedly died, after Israel killed Hamas’ military chief in Gaza with a surgical strike on Wednesday.

The Israeli army says militants have fired around 245 rockets into Israel, with the Iron Dome system intercepting 145.

Egyptian President Mohammed Morsi condemned Israel’s military action as he recalled the country’s ambassador to Israel and Egypt urged the U.S. to intervene.

President Barack Obama spoke with Mohammed Morsi and Israeli Prime Minister Benjamin Netanyahu Wednesday. He expressed support for Israel’s right to self-defense, and agreed with Netanyahu that Hamas must stop launching rockets towards Israel. The U.S. president also called on Israel to “make every effort to avoid civilian casualties” in its military actions.

The Daily Dot has found other reports of an erroneous suspension message being displayed for @IDFspokesperson, which, it should be noted, is a verified Twitter account. However, @IDFspokesperson did not appear to be suspended by a large number of Twitter users during the time period in question. This article and its headline have been modified to address this issue.