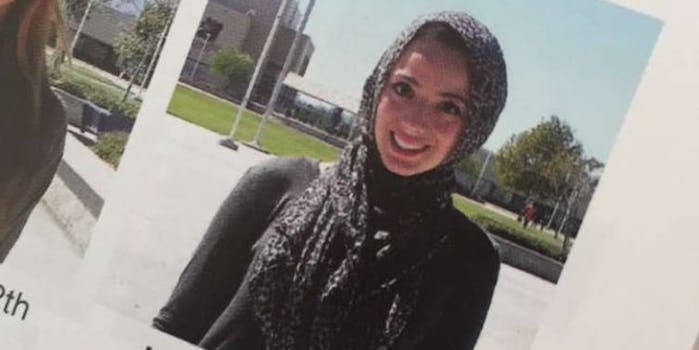 Was this high school yearbook caption a freak misprint, or a shocking racist comment?

When she opened her new yearbook, muslim teen Bayan Zehlif discovered a horrifying surprise: her photo had been renamed “Isis Phillips.”

Zehlif tweeted the photo, which quickly went viral. Either this was the world’s most unfortunate misprint, or her high school yearbook had just published a racist joke at her expense. Either way, someone should have caught the caption before the book was mailed out to students.

I guess I'm Isis in the yearbook… pic.twitter.com/hMc0dVu8dM

Writing on Facebook, Zehlif said, “I am extremely saddened, disgusted, hurt and embarrassed that the Los Osos High School yearbook was able to get away with this.”

The response on Twitter was immediate, with people calling out Zehlif’s school on the #LosOsosYearbook hashtag.

.@LosOsosHigh Somebody had to proofread/edit the #LosOsosYearbook & somebody had to approve it for print. This. Was. Not. An. Accident.

Dear @LosOsosHigh we need you to address this, now. Tonight. Don’t say it’s a typo either. pic.twitter.com/bSKaMHEbBl

The Islamic Monthly confirmed with Los Osos principal Susan Petrocelli that there used to be a student named Isis Phillips at the school, but she wasn’t able to explain how Phillips’ name came to be printed under Bayan Zehlif’s photo. The yearbook’s Twitter account later apologized for the misprint, saying that Zehlif’s name had been “mis-tagged.”

“If there is a student that has responsibly and intentionally committed this, we will take the appropriate action that is necessary,” Petrocelli tells The Islamic Monthly. Student editors oversee the production of the yearbook, which is put together by fellow students. The matter is currently under investigation.