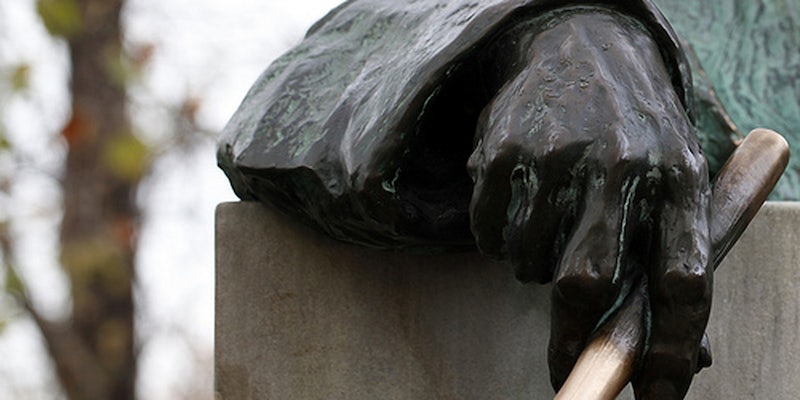 Accused of screwing over freelancers, the Toast promises change

This is what happens when someone finally reads the fine print.

Of course, if you’re going to write professionally, you’ll want to sign a contract. Recently, the Toast’s has raised some eyebrows.

On the blog Writers Beware, which warns of “literary scams, schemes, and pitfalls,” Victoria Strauss noted that the publication’s “problematic” agreement requires freelancers to “hand over copyright and waive all moral rights (including the right of attribution).” Those terms, she wrote, appeared nowhere on the site itself or in its submission guidelines. (Full disclosure: the Daily Dot acquires the same rights from its freelancers.)

I am pretty disgusted by the Toast. $50 to surrender copyright is beyond a joke.

In an open letter to the site’s operators, writer John Scalzi bemoaned this rights grab, describing the overall deal—a flat $50 fee for every possible right to one’s work—as “egregious bullshit.” He was especially dismayed, he said, because he so admired editors Mallory Ortberg and Roxane Gay, both of whom enjoyed major literary success in the past few months after years of toil, and whose personal brands are closely entwined with the sites’.

The duo, it must also be said, typically enjoy the moral high ground when it comes to digital controversy. But then there’s publisher Nick Pavich, a lawyer from Chicago. According to Ortberg, Pavich was a fan of hers who had offered to fund any website she launched—they went into business “without ever having met in real life.” That account was later contradicted in a Fast Company profile, which stated that the Toast had been bankrolled by co-editor Nicole Cliffe and her husband: Pavich “didn’t put in any money, but did quit his job as a lawyer to work full-time on the site for free for the first few months,” Rebecca Greenfield reported.

hahaha they don't name the Man involved with the Toast he's just "a business partner" https://t.co/sW70dHRKvF

Whatever Pavich’s role, even loyal Toast readers may be unaware of the dude standing behind the public faces of the company. Still, someone thought to ask him about the copyright issue—he is an in-house legal resource—and his sneering, acid replies have not played well.

@karenbowness @NMamatas Of course, you can always keep your precious words and write for us without collecting a fee.

Further complicating the story were rumors of non- and under-payment, though some felt that $50 for the surrender of moral rights—i.e., the right to claim authorship and object to distortion or modification of work—was outrageous in any case. Others acknowledged that the amount is par for the industry and hoped that the troubling clause would be amended.

Weirdest bit of this Toast news to me is watching ppl get mad that they only pay $50. Y'all have no idea how low web writing rates are, huh.

I’m kinda more surprised about the $50 flat fee from The Toast than the agreement. Is that how low internet writing pays now?

“[T]his is something that didn’t come up often in our first year, but we’ve gotten a lot more questions about lately, particularly since the Butter launched,” Ortberg told the Daily Dot in an email. “We’ve always granted repub rights to any writers who received a book or media deal … and it worked when we were a smaller, scrappier company, but I think it makes a lot of sense for it to come up now that we’re expanding.”

The plan, she wrote, is to adjust the contracts so that the Toast retains First North American Rights, which revert to the writer after six months, as well as online serial rights, so that they can keep the material on the site.

Gay and Ortberg both exhorted writers who haven’t been paid to contact Pavlich directly, though that apparently hasn’t worked in the past. Some comments from the Scalzi post: 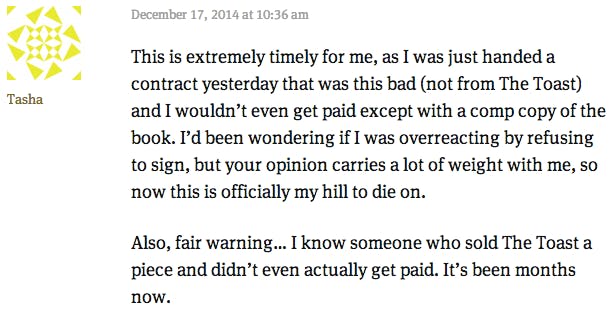 The editors also promised a post about the contract revisions (Update: here it is), which ought to put the whole matter to rest. This is a website, after all, whose community is so enamored with its staff that they accused a Hairpin contributor of plagiarizing a recurring series by Ortberg—even though this writer created the bit in 2011, well before the Toast launched.

The only thing still stuck in some freelancers’ craws is Pavich’s attitude. In remarks to the Daily Dot, Ortberg mentioned that she’s learning copyright law on the fly—but he, presumably, is not. The real lesson here, then, may be one for the writers, not the publishers:

Oh, and read your bloody contracts. NEVER SIGN ANYTHING YOU HAVE NOT READ TO THE END TWICE.

Photo by jenny downing/Flickr (CC BY 2.0)