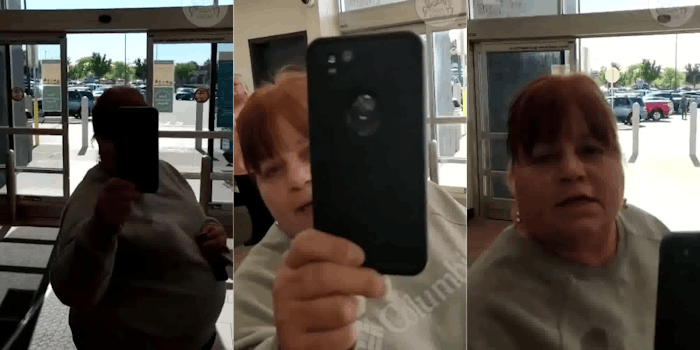 Karen goes on a viral tangent about being labeled one, says the term Karen is ‘racist’

According to Karen, the term is just as bad as the N-word.

A video of a Karen refusing to wear a mask in Walmart is going viral on Reddit. Uploaded to the r/PublicFreakout/ forum, the 2:20-minutes-long clip displays an altercation between the video recorder and a white woman who appears angered after being labeled Karen, which she claims is an anti-white, racist slur.

The video opens by showing Karen asking a group of employees what will happen if she enters the store without a mask. No one responds. She then turns to the man recording her and asks “Will you please not do that?” Before the man can reply, she threatens to call 911, immediately changing the tone of the situation. Historically, Karens have been known to make phony 911 calls that could put victims in unnecessary harm and result in police brutality.

The man then asks, “That’s your Karen reaction right?” The woman responds “Black lives matter right?” The question, which doesn’t hold any context in the discourse, prompts the videographer to state that Black lives do matter and that Karen’s life matters too, but that she isn’t acting like it does. We can assume he’s referring to the fact that she is actively choosing not to wear a mask in a public during a deadly pandemic.

The video continues to switch between scenes of Karen asking the employees if she can enter the store without a mask, telling the recorder to stop recording her, and the recorder calling her Karen. Mid into the video, Karen becomes upset with the label and claims: “That’s an anti-white racist slur and it’s like me calling you a N-word.” The recorder responds that he will have his sister fight her if she decides to use the word, which she instead responds with calling him “ignorant” and “ghetto.”

As the great poet Maya Angelou once said, “The N-word was created to divest people of their humanity.” Karen, however, is a term used to label people who refuse to treat others with humanity. Often a belligerent white woman, Karen is entitled and makes demands beyond the means of what is acceptable and necessary. Her privilege makes her demeanor dangerous, often putting others in harm’s way because society has allowed her to think and act aggressively without any consequences. For this obvious reason, to compare Karen to the N-word is both ludicrous and irrational.