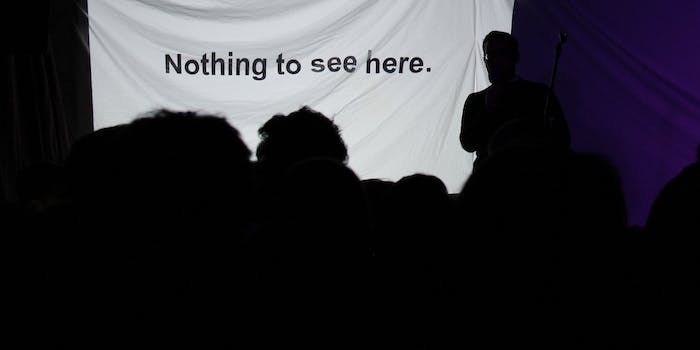 IRL Club: Where the Internet gathers to mock itself

The webbiest people in New York sweated out an evening of stimulating talks.

I didn’t much know what to expect from the second installment of IRL Club, an Internet symposium series spearheaded by New Inquiry editor and former Gawker writer Adrian Chen, but neither did anyone else, it seemed. A major police incident had cut off J and M train service to Brooklyn, so the venue, Baby’s All Right, was slow to fill. A man with a British accent queried me at the bar: “Do you know what they’ll actually be doing up there?”

There was a projector set up on stage, so probably PowerPoint-type stuff, I guessed. The inquisitive man turned out to be none other than Rurik Bradbury, cofounder of the collaboration app Unison and author of the spot-on parody Twitter account @ProfJeffJarvis, which skewers new-media guruspeak. Like most everyone who would turn out tonight, he had started tweeting (or Tumblring, or Instagramming) and ended up connected to people he wanted to meet for real.

You people at #IRLclub: Put down your phones and talk to your neighbors.

Beer in hand, I wandered up to the stage, where Gawker’s Max Read and BuzzFeed’s John Herrman were helping to set up a laptop for the presentations. Read was the one to invite me, so I asked him why he did; he and Herrman laughed knowingly.

“It’ll be entertaining, I hope,” Read said. “If you go away from this thinking about it afterward, we’ve failed,” he added, anticipating a comment to the effect that I wouldn’t want to be mentally taxed by Internet talk after a day spent neck-deep in it.

I found out more about IRL Club’s origins from Herrman. It began as a get-together for writers and editors who knew each other online; eight or nine months ago, it ballooned into a public event. Then I decided to ask my tough question.

“If this room were firebombed off the face of the earth right now, with all these people in it”—it was by now quite crowded and starting to get sweaty—“would the world be better off, or worse?”

Read said he took comfort in the idea that people like us made no difference whatsoever, so the net result was probably a wash.

Eventually, Chen took the stage to introduce the first of the evening’s four speakers, but not before delivering a little lesson in trolling live-event hashtags. By using the tags for a Comic-Con around the release of The Dark Knight Rises, for example, Chen had been able to get geeks to click on a blind link to an image that simply said: “Batman dies.” He was adamant, however, that nobody troll the #IRLClub tag (which had apparently been sorely underused last time anyway).

STOP TALKING ABOUT ME AT #irlclub

Sweating my balls off at #irlclub

Next up was Leon Chang, a.k.a. @leyawn, veteran of the previous IRL Club, who outlined his process for creating a viral ad campaign about an app that “does something.” (He was riffing on the head-scratcher subway ads for the mobile payment service Venmo, whose social team appeared to be in on the joke.) Keeping things visual, Leon’s posters featured himself sleeping with an anime body pillow and wearing adult diapers. Meanwhile, the name of the app itself proved wildly inconsistent.

Chang was followed by Catherine Frazier, a graphic designer and devoted fan of cheap, gaudy, GeoCities-era animated text and GIFs. On her Tumblr, she takes requests of odd or otherwise appealing phrases—mostly from high school followers, she readily admitted—and, using decades-old software that works only on Windows, produces sparkly moving versions in “about two seconds.”

Her most popular entries, she said, combine arrogance and self-deprecation: “Lookin’ rad, feeling sad,” for example, was pure Tumblr catnip. Unfortunately, people often ask for a “Hitler was right” GIF, which she promised she would never make. 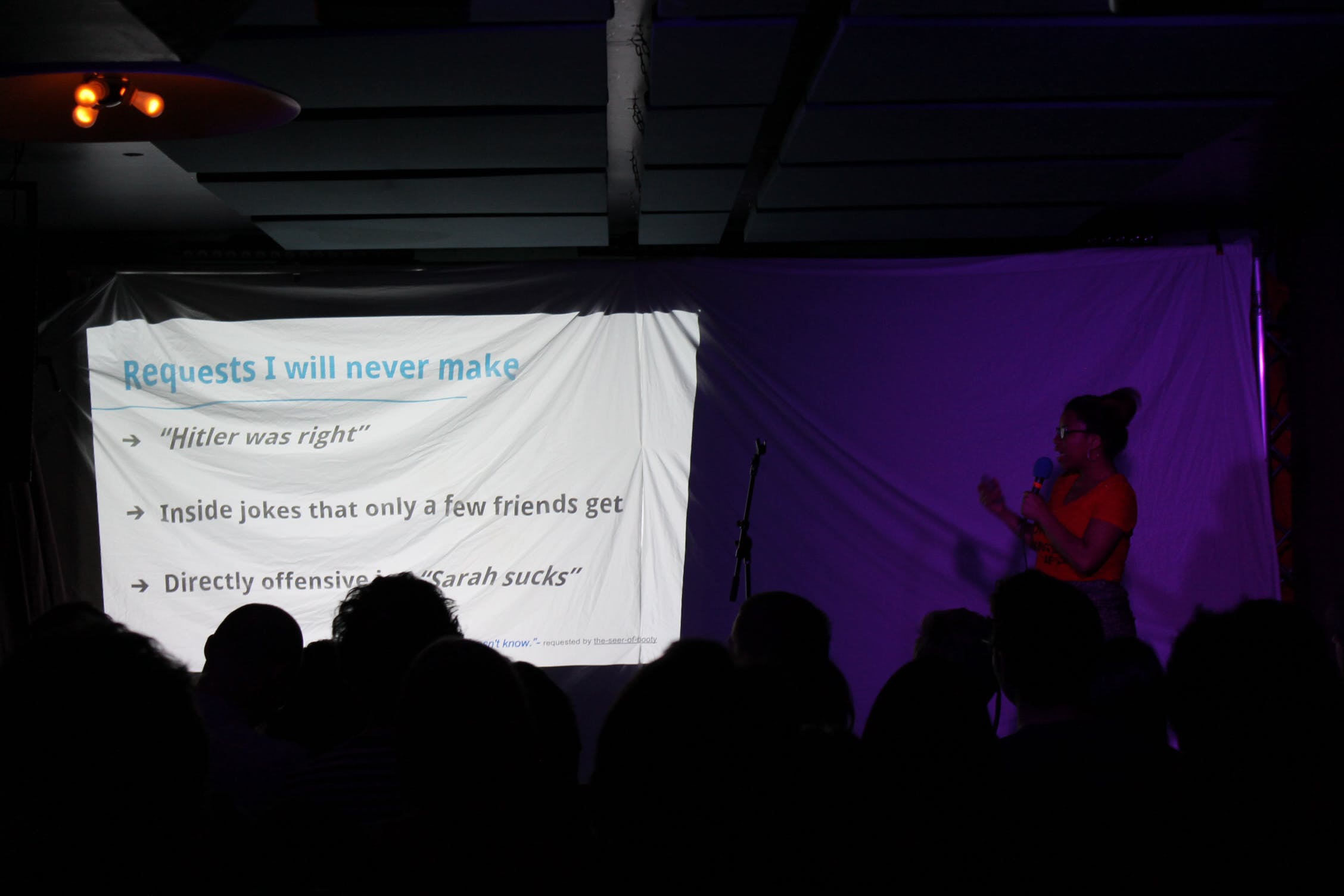 Daniel Kolitz, who produces the satirical collage blog Printed Internet, featured in the Daily Dot’s list of 2013’s best Tumblrs, also wanted to explore the pre-millennium Internet. He had lost his lecture notes but nonetheless got through an entertaining speech that he was “supposed to give in 1998,” full of the pie-eyed optimism, tech-boom babble, and Pets.com references that preceded the dotcom crash. 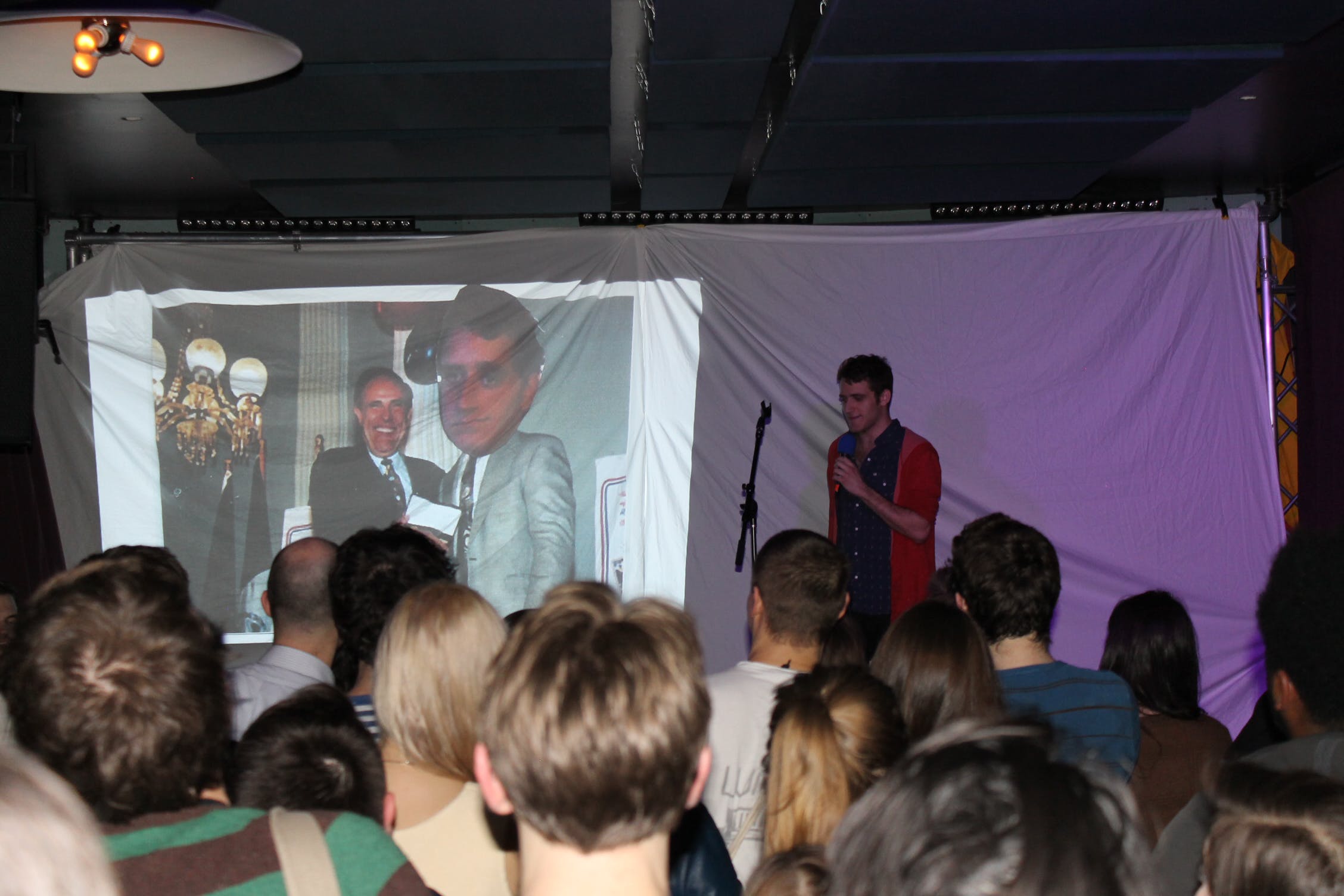 It concluded with a surreally staged conversation between two middle-aged men in turn-of-the-century computer ads—I thought Kolitz was just flipping back and forth between slides, but as he told me later, he had just kept moving forward, through some 25 identical slides. (He also confirmed that “losing his notes” was not some meta gag).

Finally, there was an appropriately emotional talk by Mark Slutsky, the brains behind the blog Sad YouTube. Rather than finding YouTube comments terminally disgusting, as many of us do, Slutsky identifies a rare, surprising, and all-too-ephemeral pathos in the unexpected bursts of memory that an old song can bring about. 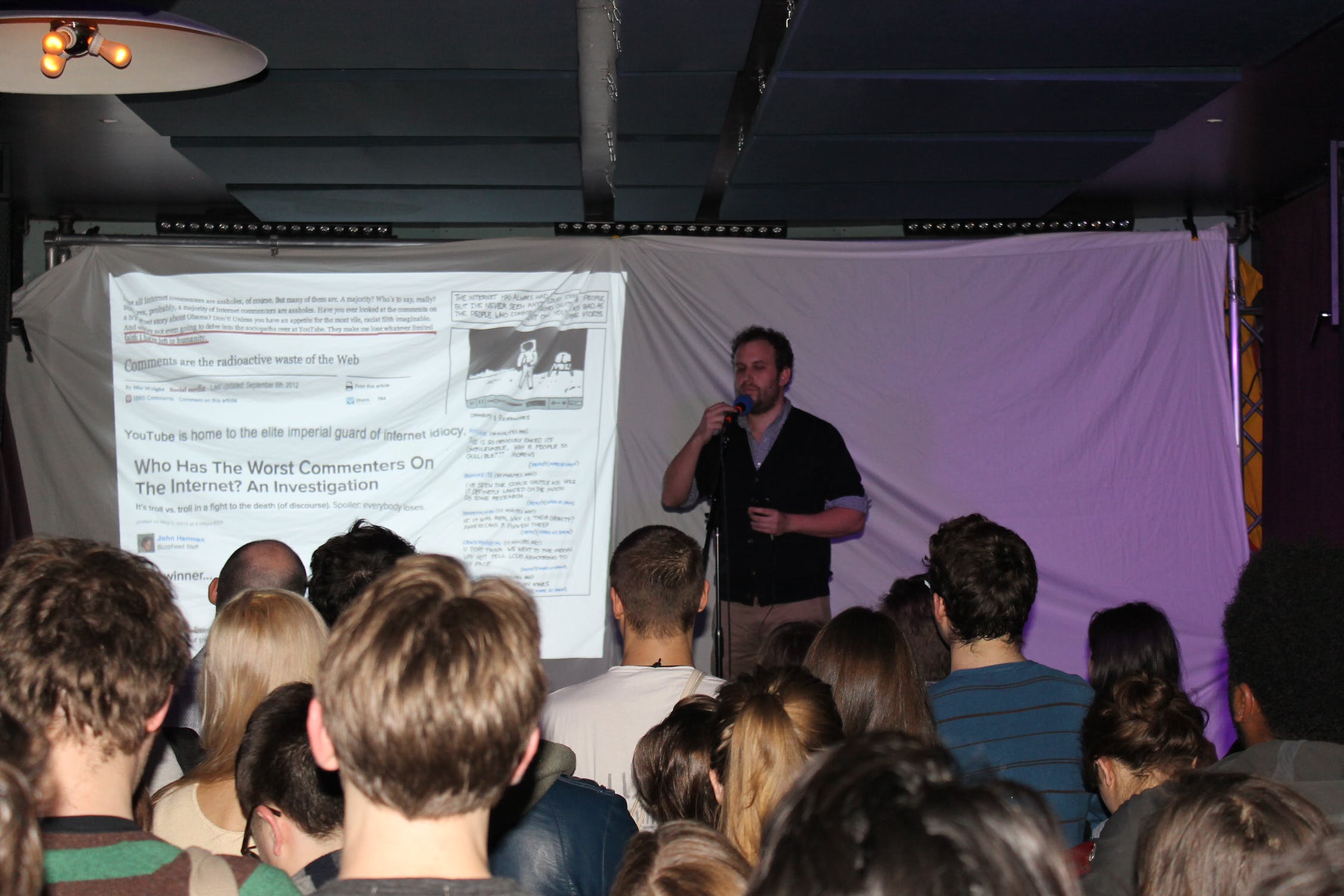 He read to us about loves that never came to be, the lingering trauma of fighting in Vietnam, and the macabre details of a fatal drag-racing accident decades ago, where one of the car’s radios was still playing music afterward. Slutsky has tracked down some of these commenters to learn more of their stories.

Later, I asked him which YouTube videos generate the most sorrowful memories. “‘Pretty Ballerina,’ by the Left Banke,” he said without hesitation. He added that “Native New Yorker” was up there too.

Afterward, Chen seemed pleased by the turnout, though he and the other organizers were swiftly hustled offstage so a band could set up. (Out of the way, nerds.) People milled about trying to work up the courage to introduce themselves to someone they knew who might not have known them. I briefly collided with BuzzFeed’s Katie Notopoulos, who played a behind-the-scenes role for the event. Someone wanted to know if she was “Katie with the balloons,” a reference to her Twitter avatar.

Thanks everyone who showed up for #IRLclub I’m sorry it was so sweaty; that was prob the first time u nerds used a sweat gland

By the bar, I spoke with Kolitz some more, who was totally relieved to not be on stage anymore (we also spoke of quitting the improvisational comedy circuit, though those skills had certainly helped tonight) and lamented that his missing notes were still somewhere in the bar. We supposed that whoever found them would have their minds blown. As folks started trickling out into the cold to escape the fug of the room, and the staff found themselves in a bit of a lull, I found occasion to chat with the lovely bartender who’d been pouring my drinks all the while.

“What did you think of this?” I asked, not having a better term for what had transpired.

“I liked it,” she beamed. “It was interesting, funny… I didn’t always know what was going on? Because it was the Internet, but everyone was talking about the past, it felt like. But it was cool.” As for the crowd, she was happy to report, “Everyone was so nice!”

And to think people say the Internet’s mean.