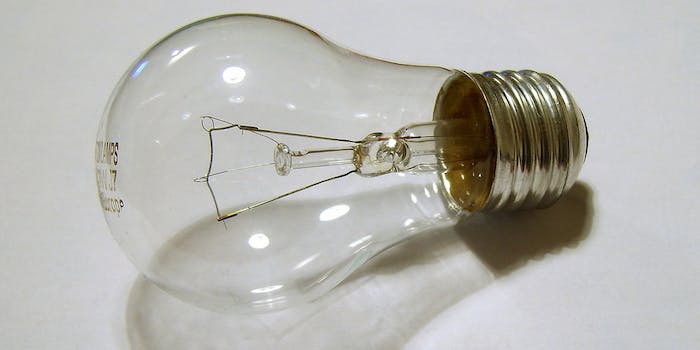 Talk about shining some light on a dark subject.

Talk about shining some light on a dark subject.

If you’ve ever watched Untold Stories of the E.R. or Sex Sent Me to the E.R. on TLC, you know it’s far from uncommon for people to arrive at emergency rooms with foreign objects stuck up various orifices. But all of these E.R. horror stories pale in comparison to this (incredibly NSFW) viral video from Iran, which depicts a woman getting a lightbulb surgically removed from her vagina.

The video, which you probably shouldn’t watch unless you’re at home/have a strong stomach, shows a group of doctors circling around a woman as they speak in Farsi and gradually remove the lightbulb from her vagina. Presumably, the doctors had to take special care while removing the lightbulb, so it remained intact and did not rupture inside the patient.

The video is somehow still on YouTube. You can watch it here, if you really really want to. Warning: NSFW. NSFL.

According to Vocativ, the video was taken by an Iranian medical student and started circulating earlier this month on Facebook and Twitter. IranWire reports that it’s been shared on Persian language social networks more than 500,000 times, with Iranians viewing the clip as a symbol of the horrific consequences of Iran’s culture of female sexual repression.

“The release of this film is one of the best and most important actions,” Iranian feminist author Ziba Nawak wrote in a YouTube comment. “It is one step towards public discussion of sex and sexuality. It’s an alternative means to resolve the sexual perversions in our society.” Others have expressed similar sentiments on Twitter, with one Iranian writing, “I don’t need to talk about the #lamp, only to say that these only two minutes show the ass-load of ignorance in all aspects of our society.”

Although youth culture in Iran is becoming increasingly Westernized, there are still laws against young people having premarital sex or entering premarital romantic relationships in the country, meaning unmarried Iranian women receive very little sexual education before marriage. (Of course, this hasn’t stopped unmarried men and women from actually having sex, if the rise of underground hymen restoration surgeries in the country is any indication.)

“Not long ago I had to remove a glass cup from a woman’s vagina, but I first saw this kind of thing when I was at medical school working in the gynecology ward,” Iranian gynecologist Dr. Ghazak Khavari told IranWire. “A young woman had tried to pleasure herself using a spray can. You come across these types of things in general surgery as well.”

Of course, the phenomenon of people pleasuring themselves with, shall we say, unconventional objects is obviously not exclusive to Iran. But in a country where having premarital or extramarital sex is an offense punishable by stoning, it’s sad but not surprising that this woman would resort to unorthodox and unsage methods to find sexual release, and it’s also not surprising that the video of her surgery would resonate with so many Iranians.