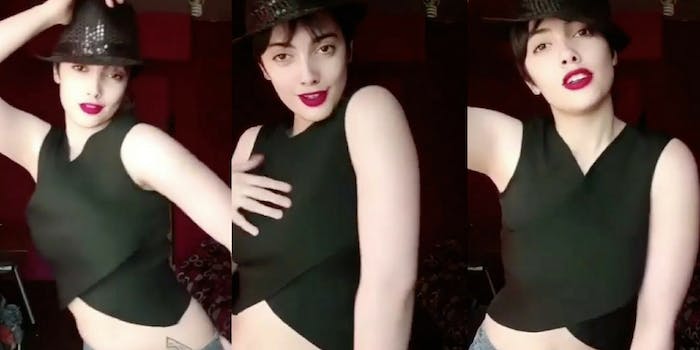 Teen arrested in Iran for dancing in Instagram videos

Activists say she was forced by the state to give a public confession.

A teenage girl, as well as several others, have been arrested in Iran over videos they’ve posted to Instagram. The teenager, 18-year-old gymnast Maedeh Hojabri, had uploaded videos of herself dancing without wearing a hijab, which is required dress in public. She has since been released on bail, the Associated Press reported, while other women have uploaded videos of themselves dancing as a show of support.

According to the Guardian, Hojabri’s Instagram account was initially suspended, though Gizmodo reported that her account appears to have been reactivated. Several fan accounts continue to share photos and videos of Hojabri, some videos with hundreds of thousands of views. Many of her posts show her dancing to Western and Iranian music and in different styles.

Hojabri and the other detained women reportedly appeared on a broadcasted video on State TV on Friday. During the recording, Hojabri acknowledged “breaking moral norms” but said she was only trying to grow her follower count. The video showed a young woman whose face was blurred as she cried and shook during her statement.

“It wasn’t for attracting attention,” the teen reportedly said. “I had some followers and these videos were for them. I did not have any intention to encourage others doing the same…I didn’t work with a team, I received no training. I only do gymnastics.”

Activists, however, say the “confessions” of Hojabri and others were forced by Iranian authorities.

Across social media, women and organizations are uploading videos of themselves dancing with various hashtags, one of them that translates to #dancing_isn’t_a_crime, in support of Hojabri, the BBC reported.

Art is the language of the souls, highest of the hopes, not a crime. Souls die when you confiscate the art. #برقص_تا_برقصیم pic.twitter.com/2cQmIVOykP

Iranian police said they will shut down accounts such as Hojabri’s, though the judiciary is considering blocking the site altogether. Facebook, Twitter, and YouTube are already blocked in the country, but are accessed through proxies and VPNs, according to the AP.

Hojabri and the other women arrested aren’t the first to be penalized for recording their dance moves. Earlier this year, a city official in Mashhad was arrested after a video showed a crowd of men and women dancing at the city mall, and six people were arrested for Zumba dancing last August, according to the BBC. And in 2014, six Iranian women were arrested for a video of themselves dancing to Pharrell’s “Happy” in Tehran.