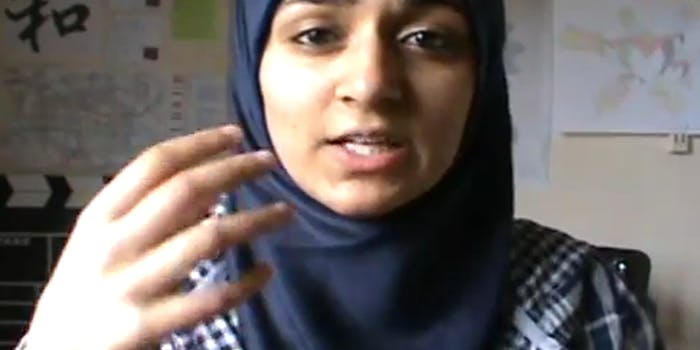 After the Twitter hashtag #blamethemuslims provoked illumination and offense this week, the Daily Dot caught up with its creator Thursday to get her thoughts on its impact and what she sees as anti-Muslim sentiments in the mainstream media.

Sanum Ghafoor, 19, is a college student working at a summer school program in London. She took to Twitter last weekend in frustration over reports on CNN and Fox News that partially blamed Muslims for the Norway bombing and massacre. The result of her frustration was the hashtag #blamethemuslims, intended as a comic acknowledgement of “how ridiculous it is to blame Muslims for every problem int he world,” tweeted Ghafoor.

The hashtag took Twitter by storm, collecting thousands of mentions in just a few hours.

“I honestly had no idea that it would go worldwide,” Ghafoor said in an interview.

The hashtag made Ghafoor a polarizing figure. Many people praised her ingenuity. Others called her a racist.

“I understand why they acted they way they did,” Ghafoor said. “With Twitter, you have to do a little bit more research. You can’t just go on what you initially read. I wasn’t blaming the Muslims, I’m a Muslim myself. I don’t know if Twitter should have banned it or anything because if you look at it at face value, [it’s] unacceptable. But if you understood why I started it, then it’s acceptable.”

As the hashtag spread, Ghafoor was asked to appear on an Al Jazeera program to clear the air regarding #blamethemuslims.

“It was an opportunity for people to understand why I started it,” Ghafoor said. “I retweeted it (the program), a lot of people saw it and I got a lot of apologies from people who had originally sent me hate comments.”

Through all the hate mail and hate tweets she still receives, Ghafoor was pleased to receive a link to a “Colbert Report” clip where Stephen Colbert comes to defense of the Muslims.

“It really says something about the media out there, that you have to resort to comedy shows about the news to actually get the real information,” Ghafoor said. “They tell more of the truth than any other news channels.”