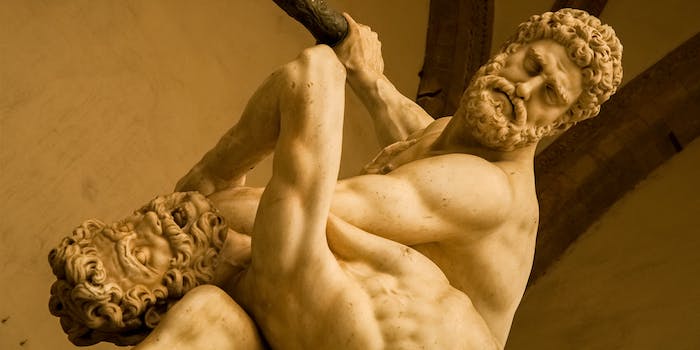 Acting as if it's an 'anti-feminist' celebration hurts us all.

Observing International Men’s Day in 2018 might seem a little out of place. Amid the one-year mark of the Me Too movement against sexual harassment and assault, and the snail’s pace at which salaries of women of color are tracking to meet up with those of white men, “celebrating” men and masculinity feels “unnecessary.”

“Isn’t every day International Men’s Day?” I can recall myself snidely commenting years ago.

But this day of acknowledgment isn’t so much about celebrating masculinity as it is about questioning it. About checking in with men in your life to make sure they know that, contrary to how they may feel their own issues are being regarded publicly, people care about their health and wellbeing.

We care if men struggle with meeting the unspoken criteria of masculinity, or if they find themselves to be a survivor of sexual assault, or if they live with depression or suicidal ideation. We care that gay, bisexual, and transgender men are unfairly harassed and discriminated against, and that men of color are unfairly policed by people in their communities.

International Men’s Day gives us an opportunity to signal the acceptance of healthy masculinities, and remind ourselves to check in with the people in our lives who may have problems embracing those ideas for themselves.

Across Twitter, people are sharing their hopes and reminders for International Men’s Day, using the day as a hashtag. Some are discussing the health risks that men often have to deal with at a higher rate—that men are more likely to commit suicide and hide mental health issues. Many are placing an emphasis on mental health, reminding men to take time for themselves to address mental health problems.

Men are three times more likely to kill themselves.

To be addicts.
To die young.
To be violent.
To commit crime.
To end up homeless.
Or in prison.

Happy #InternationalMensDay you sexy men. Ignore the absolute dickheads who use this day to be absolute dickheads. The stigma around male mental health still exists, so spend some time looking after yourself, check in on a mate, let's look out for each other as much as we can

Others are taking it to the next level and imploring men to embrace feminism—the equality of all genders—as a means of acknowledging how they themselves hold each other up to unrealistic and harmful standards of masculinity. And some are outright naming the patriarchy and toxic masculinity, the restrictive valuation of traditionally masculine traits.

Today is #InternationalMensDay. Together let's challenge harmful gender stereotypes and recognise that equality is for everyone. Feminism benefits all.

My hope is that all of us men who have ever succumb to toxic masculinity and mask our pain and true selves find light today.

– Sharing feelings is "feminine" and bad.
– Physical strength = self-worth.
– It is THEIR job to support a family.
– They are somehow "less of a man" if a wife earns more.

The patriarchy is bad for everyone.

On #InternationalMensDay remember that a sense of entitlement is the surest way to a half lived life.

On this #InternationalMensDay a shout-out to all the men out there who live up to the name: men in care and compassion, men in understanding and diligence, men in humility and service. Glad I know several such men. Thank you for making our world a better, happier place for all.

However, such invitations still seem to irk some who think that the exploration of mental health is a signal that masculinity is under siege, implying the end of men themselves.

Men getting defensive in my mentions about the negative effects of the patriarchy ON MEN that I've decided to highlight for #InternationalMensDay is Peak Toxic Masculinity.

So tired of women on #InternationalMensDay lecturing us that 'if we only gave up "toxic masculinity" and became more like women, all our problems would be solved'.

We'll make our own decisions about our future, thank you very much. https://t.co/dDcNceQ7tk

And some are at least trying to embrace the sentiment, but are still enforcing negative messaging about men needing to “tough it out” and “man up.”

Don’t fucking kill yourself, lads. You can be strong, silent, and tough it out as long as you'd like but if you ever need to talk to someone, please man up and open up. No one is going to think less of you for it and if they do, they’re a dipshit. #InternationalMensDay

Others, however, aren’t taking the day seriously at all, as if it’s better to crack a joke than check in on men’s mental health.

Why aren’t any women wishing men on #internationalmensday. pic.twitter.com/EZSNCJZhNG

Everyday is Men's Day. Except for that one day when it's Woman's Day.

Happy #InternationalMensDay. I have to lift up my moobs to check my balls and my privilege. pic.twitter.com/atZ56cV8uk

Contrary to what critics of feminism think feminists say about masculinity, masculinity isn’t inherently negative. However, the upholding of values such as dominance, aggression, and control is what makes masculinity toxic. When men don’t feel they can be themselves and can exhibit traditionally “feminine” traits such as empathy, care, and collaboration, and feel forced into a box that requires them to uphold traditional notions of “manhood,” that’s when we run into trouble. It’s a culture that teaches boys from young ages that they must be tough and unemotional, and it hurts everyone involved.

For all my glass-jawed bros upset by the headline (I didn’t write), here’s a diagram. Let’s agree that being born a man is a pretty good outcome in the genetic lottery. But SOME aspects of masculinity, in SOME blokes, is toxic to them, and those around them.#InternationalMensDay pic.twitter.com/xxIHEwnphh

ICYMI here’s a little thread we did last year about how childhood gender-stereotyping limits boys and how we can do better. Still true! #InternationalMensDay https://t.co/PvevRx3m7Z

Perhaps, more people can take this Twitter advice and check in with the ways in which they’ve rejected toxic masculinity, too.

In school I was told ‘Flowers are for girls’.