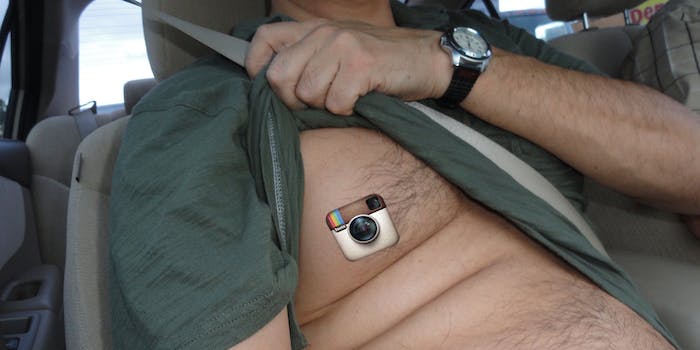 Can you tell if these breasts belong to a man or woman?

Instagram is no place for the female nipple. That’s been made clear time and time again. But what about a male nipple that sort of looks like a female nipple? What then?

In a new twist on the #FreeTheNipple movement, James Shamsi decided to do an experiment to test the boundaries of what Instagram deems an appropriate nipple. He posted a random photo on Instagram that he found online of a bare-chested man with areolae larger that the typical male’s. In other words, nipples that more closely resembled those of a woman. Then he put out a call to his Facebook friends to help him test a theory.

“I saw a lot of posts recently about #FreeTheNipple by friends, so I started looking into it just this week,” Shamsi told the Daily Dot via email. “Soon enough I realized Instagrams (and societies) policies are still a little archaic when it comes to the perception of the Human chest. So, I wanted to see for myself and prove to Instagram just how silly their policies are.”

That’s when he came up with the idea to see if Instagram would have the audacity to take down a post that was actually not violating any of its policies. “They should hopefully see how daft and over sexualized the entire thing is,” he said.

Shamsi posted the photo, and just as he expected, it was subsequently taken down after multiple users reported it.

UPDATE: Instagram reinstated the photo because these were male #facepalm

“Standards around nudity vary greatly by culture, country, age, and other factors. Our goal has always been to find a balance between enabling people to express themselves, while also making sure that our large, diverse, global community feels comfortable. Striking the right balance is hard – and examples like this highlight the complexity of this issue. As always, we continue to analyze our policies to make sure that we’re listening to people and meeting the needs of our global community.”

Photo via osseous/Flickr (CC BY 2.0) | Remix by Jason Reed