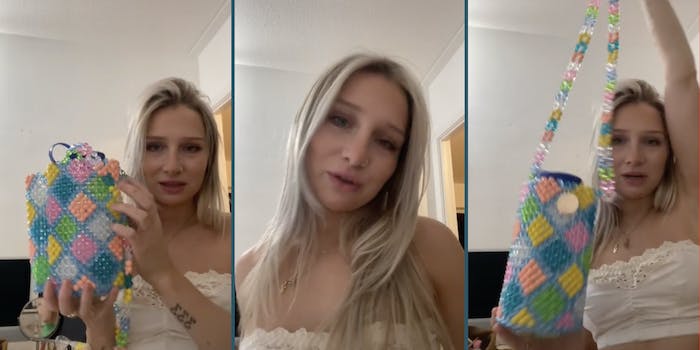 ‘Consumerism is a disease’: TikToker says influencer who lives in her building throws PR gifts in the trash room

'That stuff is just going to the landfill.'

In a viral video, TikToker Nikki (@nikoosh96) reveals that an influencer who lives in the same New York apartment building as her frequently throws out some of the PR gifts she is sent.

“I hate influencer culture. I hate pr. I ha[te] how much shit gets sent to millions of people who do not need it,” she captioned the video.

While Nikki notes that she loves the unnamed influencer’s content, she’s upset to see her throwing away expensive items that could find another home.

“It kind of makes me upset because sometimes it’s really nice things and then that stuff is just going to the landfill,” Nikki says.

She proceeds to show the Susan Alexandra beaded water bottle holder she had taken from the trash. The product, a collaboration with skincare brand Supergoop, retails for $285.

Nikki argues that the influencer could simply put the items in the lobby with a note labeled “free” for her neighbors, rather than throwing them away.

Her video has over 666,000 views as of Monday. In the comments section, viewers speculated about the influencer in question and wondered why the gifts were in the trash room.

“Sorry guys it’s not me bc I wish that brand would send me pr,” influencer Victoria Paris commented. “I would be wearing that purse 24/7 365.”

“If she’s not putting it directly in the trash, she’s probably hoping someone who wants it will take it,” one user said.

“I wanna see a haul of everything you get! The way I’d be in the trash room every day,” another wrote.

One comment requesting Nikki to “speak on it” was used in a response video from the TikToker. She emphasized how her intentions with the video was not to shame anyone.

“We live in this ridiculous society where the developed world is just exploiting the global South on a daily basis, starting war, starting so many conflicts,” she says in the follow-up video. “Just so we can keep taking resources from the planet without thinking of the long term consequences. So we can make items that, more often than not, are not necessary, and for people to enjoy momentarily and just throw out.”

“It’s a systemic problem,” she continues. “It’s not just influencers.”

Several experts note that the United States is embedded in a culture of consumption . A 2021 NPR interview with Lizabeth Cohen, a professor of American history at Harvard University, states that the American economy relies on consumerism—particularly in times of crisis.

“Consuming has been a way of demonstrating that the economy and the society are continuing to be vital and viable,” Cohen said. “This is a real dilemma, I would say, today, where 70% of GDP is dependent on consumption.”

In the comments of Nikki’s second video, some viewers urged her to contact the influencer about finding another home for the items, while others applauded her for speaking up.

“If you feel comfortable, you should write her a note and ask if you can take all of her unwanted items. You take what you want and donate the rest!” one user commented.

“You don’t have to shame her, but I will. I’m glad you’re speaking on this though! Consumerism is a disease,” another said.