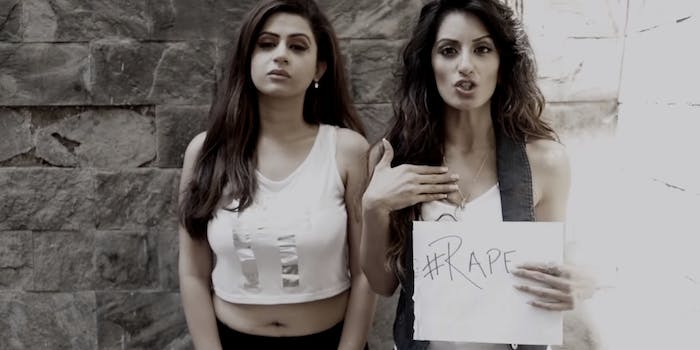 The BomBaebs have some verses you won't soon forget.

How do you fight back against the brutality and violence of rape culture? If you’re anything like artist Uppekha Jain or television host Pankhuri Awasthi, you shout so loud you can’t be ignored.

Only days after the release of the powerful BBC documentary India’s Daughter, these two women came together to shine a light on the reality of India’s rape culture by broadcasting their voices to the world in a powerful, viral video. Dubbing themselves the BomBaebs, the Mumbai-based women penned a searing spoken-word piece, “Rap Against Rape.”

In the three-minute-long video the women spit cutting verses that decry the silence Indian society has taken when it comes to the abuse and mistreatment of women. The BomBaebs call upon the social media generation to effect change. “Stop that tweet/And actually get on your feet/And help reform this mindset/That for years has been preset,” Ashwati raps as she holds a sign that bares the hashtag #misogyny.

During an interview with the Guardian, Jain spoke candidly, telling the publication that after being victimized by some of the issues mentioned in their rap the women decided to speak up.”Let’s be the voice for other women who might not be able to speak about it,” Jain said. With close to half-a-million views, it’s clear that their voices, and those of countless Indian women, are being heard.