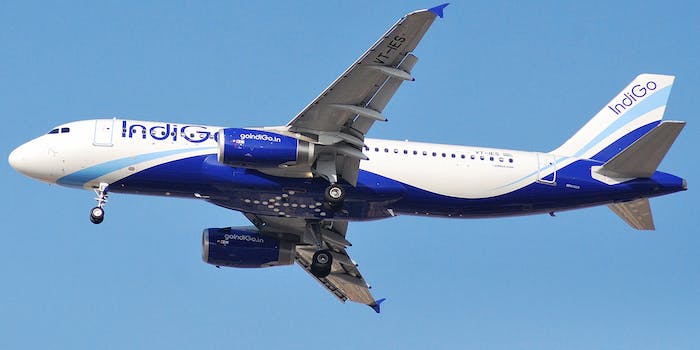 "Because I’m a girl? And you have the right to touch me any time, anywhere you want to?"

Powerful footage of an Indian woman publicly shaming a man who sexually harassed her on an airplane has gone viral on YouTube.

The young lady, who was on an IndiGo Airlines flight to the southeastern Indian city of Bhubaneswar, started recording the video after the man in the seat behind her reportedly tried to grope her by placing his hand over the seats. After the woman ignored his first effort, the man tried once more to reach out and grab her, which led to the woman exploding in a fit of rage.

In the video, the young woman is seen interrogating the man loudly in front of the rest of the passengers, as a way to shame him for his actions.

Though the woman quickly switches between English and Hinglish, or a hybrid of Hindi and English, during the altercation, Buzzfeed India has translated the exchange:

Girl: “You’re asking for forgiveness. Why? Because I’m a girl? And you have the right to touch me any time, anywhere you want to?”

Girl: “What forgiveness are you asking for? Did you do it only once? Was it by mistake? Look at how old you are. Old moron. Half way into your grave and still not wise enough. Say more? Say more, come on. I’m videotaping you, mister! If you ever do this again, you’ll remember this episode. You think us girls stay silent and you can do anything, right? Look here. Why are you so bashful now? I will call security. I’ll make sure I make a complaint.”

Girl: “Why? Why, please? I’m sorry, please. I’m sorry that I’m a girl! Please, forgive me, for I dare to travel alone as a woman. I’m so sorry for that! I will not leave you.”

Girl: “Yes, I have purposefully done that. You thought you could do it again, right? You were touching me here again the second time. You thought I didn’t know what was going on and I would stay quiet, right? Only us girls are expected to have shame. You have a right to be shameless.”

Footage of the incident was uploaded to YouTube over the weekend by Shreyas Rao, who wrote in the comments that the video was forwarded to him by the young woman herself. Along with the video she included a message summarizing the event.

“I clicked his pictures and made videos, [and] shouted so loud that the entire plane came forward to see him! I made sure I humiliate [sic] him as much as possible because I know law will do nothing,” she wrote.

A second video has since surfaced on YouTube, where the girl is seen speaking with her attacker at the airport. In the clip, the man attempts to make amends for his transgression by offering a written apology, stating that he’s “got the punishment already… I already faced the humiliation.” Unsatisfied with the apology, the woman coldly replies: “You decided the action; I will decide the reaction.”

In the note the young woman in the video forwarded to Rao, she writes that she filed a formal police report immediately following the incident, and was assisted by staff from the airline throughout the ordeal. She contends the man in the video “is under police custody currently.”H/T Reddit | Photo via kurushpawar/Flickr (CC BY-SA 2.0)