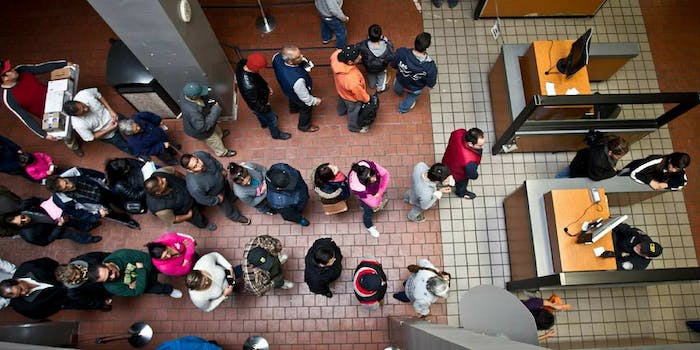 After months of viral misinformation, her mom speaks out.

Last month, Twitter was set ablaze by an immigration lawyer’s story about a child who had been detained by Immigration and Customs Enforcement (ICE) and died. At the time, immigration activists blamed the Trump administration’s “zero tolerance” policy for the child’s death. But on Monday, Vice News published her mother’s story, the first such account since the child’s death was incorrectly reported in July.

According to Vice News, 20-year-old Yazmin Juárez and her 18-month-old daughter Mariee were held in the South Texas Family Detention Center in Dilley, Texas, in March after being apprehended at the U.S.-Mexico border. After one week in Dilley, Mariee developed a 104-degree fever along with coughing and congestion. Yazmin and Mariee passed their “credible fear” interview in their asylum process and were released after 20 days in the facility. Six weeks after the family’s release, however, Mariee died of viral pneumonitis at Children’s Hospital of Philadelphia.

Juárez is now being represented by Washington, D.C.-based law firm Arnold & Porter, and is pursuing legal action against ICE. According to R. Stanton Jones, a partner at the firm, ICE placed the family in a facility with “unsafe conditions, neglectful medical care, and inadequate supervision,” alleging that Mariee contracted a respiratory infection while there and was left under-treated for a month.

But nearly two months after Mariee’s death, her story was incorrectly reported via Twitter, causing additional shock through immigrants rights communities at a time when the Trump administration had missed several deadlines to reunite families as ordered by a federal judge.

On July 31, Houston-based immigration attorney Mana Yegani tweeted about “reports” that a child had died in ICE custody in a family detention facility in Dilley, Texas. She wrote that it was unclear where the child’s parents were, and that “some reports” indicated the parents were in New Jersey.

Minutes later, she deleted the tweet and clarified that the child hadn’t died while in ICE custody, but after being released from custody, “as a result of possible negligent care and a respiratory illness,” possibly contracted from another child. Yegani reported that the child had indeed been in the South Texas Family Detention Center.

Update: The child died following her stay at an ICE Detention Center, as a result of possible negligent care and a respiratory illness she contracted from one of the other children.
The events took place in Dilley Family Detention Center in south Texas.

If they ask for a visa, the US government won’t give them one. If they stay in their country their kids get killed by the gangs. So they are damned if they try to come the legal or illegal way.

She wrote that she had received the reports from another lawyer who was a friend of the family and who was in touch with the grandmother of the child. The grandmother of the child was reportedly in New Jersey. Yegani also shared a screenshot of a Facebook message with the family friend, identified as Melissa Lynn, who said she was “doing her best” to find resources for the family. Yegani has since deleted those tweets.

At the time, Melissa L. Turcios, the other lawyer and family friend of Juárez’s, told the Daily Dot that she was attempting to connect the family with legal representation and that she was not at liberty to disclose more information about the child’s alleged death.

Despite Yegani’s clarification that the child had died after being released from ICE custody, ICE tweeted a statement the following day refuting the allegation, stating that “reports that a child died in ICE custody at Dilley are false.”

Reports that a child died in ICE custody at Dilley are false.

In a statement to mySA.com on Aug.1, ICE said it was “looking into the report” of the child’s death and cannot provide additional specifics.

“The updated accusation leaves little to no info that allows us to research,” the statement read. “We are looking into the report of the death after custody, but without any specifics about who this was we are unable to provide anything further at this time.”

Spectators of Yegani’s immediate tweets and clarification mourned the child’s death and began blaming the Trump administration’s zero tolerance policy, which separated families who came into the U.S. both as asylum seekers and unauthorized. At the time, an estimated 550 children of about 2,500 separated children were still split from their parents.

These ICE detention centers, which were just referred to as "summer camps", where children might:

Yet more blood on @realDonaldTrump & @GOP hands. This is sickening. This is evil, it's deranged, it's the real Trump derangement syndrome, subjecting children to what is paramount to torture. https://t.co/XbtYcB7GBR

I don't doubt this one tiny bit. A cage or a prison isn't a place for a child – doesn't matter if you rename them "family detention centers"https://t.co/LfV12jbvJX

A child has died after being detained at an ICE detention center. Someone needs to go to jail for this. Full stop. #ReuniteFamilies #DemForce https://t.co/MxIyo94jT2

Speaking to Vice News this week, ICE declined to comment on Mariee’s case specifically, saying that it is “committed to ensuring the welfare of all those in the agency’s custody,” including “necessary and appropriate medical care.”

“Comprehensive medical care is provided to all individuals in ICE custody,” an ICE spokesperson told Vice via email.

According to Vice News, five pediatricians reviewed Mariee’s symptoms, vitals, and doctor’s notes as documented by ICE, and said that Mariee’s course of treatment was “consistent” with what they themselves would do for a toddler with her symptoms. Mariee’s virus might have killed her even if she had been transferred to a full hospital while at Dilley, they said.

However, the pediatricians said that the conditions of mass detention in prison-like facilities can cause stress and trauma, which can negatively impact a child’s recovery from such a respiratory infection.

On May 10, after Mariee had spent weeks in a medically induced coma and spent the remainder of her life at hospitals in New Jersey and Philadelphia, Juárez decided to take her daughter off life support. She sent Mariee’s body back to Guatemala to be buried with relatives. She now owes more than $2 million for Mariee’s medical fees.

“I had the illusion of making a new life with her, because my life in Guatemala was unbearable,” Juárez told Vice News. “I wanted to live happily with her, to go to the park with her and to work hard for her. She was everything to me, but unfortunately, that didn’t happen.”

Update 3:35pm CT, Aug. 28: Law firm Arnold & Porter, on behalf of Yazmin Juarez, has filed a $40 million lawsuit against the city of Eloy, Arizona, which operates the Dilley facility where Juarez and her child were held.

“Those responsible for providing safe, sanitary conditions and proper medical care failed this little girl, and it caused her to die a painful death,” R. Stanton Jones, a partner at Arnold & Porter, said in a statement. “Mariee Juarez entered Dilley a healthy baby girl and 20 days later was discharged a gravely ill child with a life-threatening respiratory infection. Mariee died just months before her second birthday because ICE, the City of Eloy and others charged with her medical care neglected to provide the most basic standard of care as her condition rapidly deteriorated, and her mother Yazmin pleaded for help. We will do everything we can to ensure nothing like this ever happens again.”