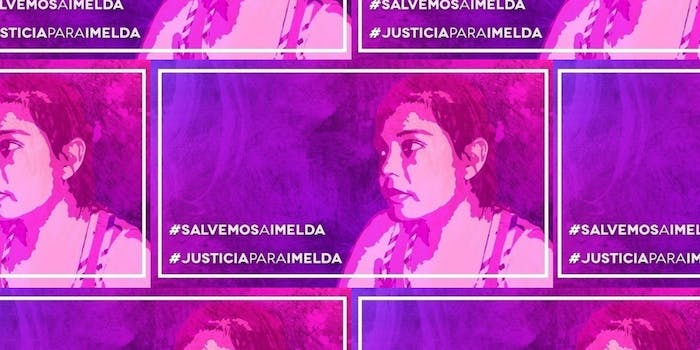 Officials say she tried to have an abortion.

Advocates across the internet are calling for justice for a 20-year-old Salvadoran woman who is facing 20 years in jail for attempting an abortion. According to the Guardian, the woman, Imelda Cortez, had no idea she was pregnant but had become so after her 70-year-old stepfather sexually abused her; he had reportedly been doing so since she was 12.

The publication reports that Cortez has been in custody since April 2017 after giving birth to the baby in a restroom, and that her criminal trial begins today. At the time of her arrest, she had been rushed to the hospital after her mother found her in pain and bleeding, and the doctor there suspected she had attempted an abortion. Despite officers finding the baby healthy and alive, Cortez was charged with attempted murder and sent to jail after a week in the hospital.

Cortez’s abuse wasn’t reported until another patient had overheard Cortez’s stepfather, who had visited her, threaten to kill her family if she reported him. After prosecutors said Cortez was lying, a DNA test confirmed the baby was her stepfather’s. The stepfather has yet to be charged for rape and abuse. In El Salvador, all circumstances of abortion are illegal, with many of the women charged having suffered a miscarriage or stillbirth, or not having known they were pregnant.

Across Twitter, people are sharing Cortez’s story with the hashtags #EyesOnElSalvador and #SalvemosAImelda, showing solidarity with the young sexual abuse survivor and generating attention for her criminal trial. The Guardian reports that a ruling by three judges is expected within the next week.

No one should go prison for being a girl, being poor, being raped or suffering an obstetric emergency. In El Salvador, Imelda may be sent to prison for this. Tell @DouglasM_R: The world is watching. #EyesOnElSalvador #SalvemosAImelda #BelieveWomen @womensmediacntr pic.twitter.com/im9ullEMVG

Imelda, a woman in El Salvador, can be sent to prison for 20 years after an obstetric emergency. This week, @FGR_SV has the opportunity to end her trial and give her freedom. Tell them: the world is watching. #EyesOnElSalvador #SalvemosAImelda #JusticiaParaImelda pic.twitter.com/pfXfoTvHmh

People are also using the hashtag #EyesOnElSalvador to bring attention to the country’s unfair persecution of women prior to Cortez’s trial.

In El Salvador, women whose lives are at risk & girls who have been raped are refused access to abortion. 20+ women who had stillbirths have been jailed because of the ban. The Salvadoran legislature has 2 days left to do the right thing #EyesOnElSalvador https://t.co/TK1Raw9bzB

In El Salvador, abortion is banned in all cases – even those when a woman's life is at risk. The Salvadoran Congress must end this law. The world is watching. #EyesonElSalvador

For Cortez specifically, an organization called Agrupación Ciudadana has started a Change.org petition for her release. Nearly 50,000 people have signed it so far.