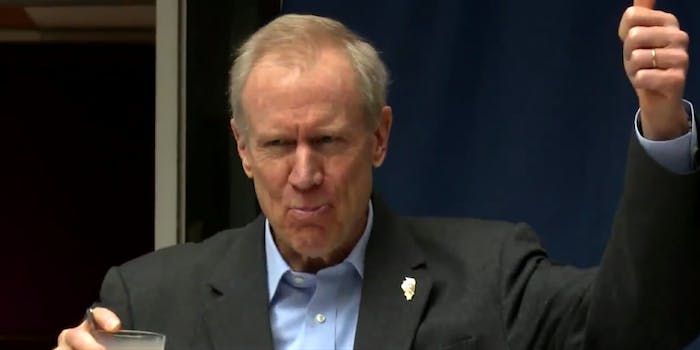 This is of course how diversity works.

Illinois Gov. Bruce Rauner (R) cares about diversity. In fact, he cares about it so much that he drank your mom’s favorite chocolate milk concoction at a corporate event honoring Black History Month.

The supposed-metaphor happened after Hyatt Hotels’ vice president and global chief diversity officer Tyronne Stoudemire presented a bottle of Hershey’s chocolate syrup and said that it represents “diversity” through “women, people of color, people with disabilities, the aging population, and generation X, Y, and Z.” Standing on stage right next to him, Gov. Rauner held a glass of milk as Stoudemire poured chocolate syrup right into it.

“It’s not that organizations are not diverse, but when you look at most organizations, diversity sits, what? At the bottom of the organization,” Stoudemire said, CBS reports. “You don’t get inclusion until you stir it up. I want you to stir it up, governor. Stir it up.”

Gov. Rauner went on to do just that, offering to drink the chocolate milk live on stage.

“You’ll drink it? You’ll be proud to,” Stoudemire quipped, after which Gov. Rauner took a sizable gulp, gave a thumbs up, and unsolicitedly shouted, “It’s really, really good… Diversity!”

While celebrating Black History Month at the Thompson Center, Hyatt Hotels executive Tyronne Stoudemire asked for Governor Rauner's help while he used a glass of chocolate milk to demonstrate a lesson on corporate diversity. pic.twitter.com/ETFq7dBvQD

While Gov. Rauner most certainly enjoyed his complimentary Black History Month milk, most of the internet saw through the gag as a cheap attempt to encourage corporations to diversify. Ending racism in the business world takes much more than putting Hershey’s syrup into a milk glass, and turning all marginalized people into chocolate syurp ignores some pretty complicated power dynamics that happen between people based on race, class, and gender.

I swear to god I just witnessed Illinois Gov. Rauner stir Hershey's syrup into milk, and take a big sip to symbolize his commitment to diversity. pic.twitter.com/E3rOFZ6wuC

Here's a follow-up shot of the statesmanlike thumbs-up he gave after quaffing diversity milk. pic.twitter.com/94D57XYluW

How can you achieve true diversity without using almond milk?

Many Illinois citizens think the Republican governor isn’t capable of encouraging diversity in his state, either. After all, he previously balked at criticizing a racist cartoon, and he hesitated in calling both President Donald Trump and former Ku Klux Klan leader David Duke a racist. Diversity isn’t exactly Rauner’s thing.

Racists be like, "I'm not racist I have a black friend" and Rauner out here saying he can't be racist because he drinks chocolate milk. I don't even have a joke to add to this.

Oh, and The Simpsons already beat him to the chocolate milk punch.

Meanwhile, Chance the Rapper donated $1 million to Chicago public schools after Gov. Rauner vetoed a bill that would have given the city’s schools $215 million to combat its debt crisis. It’s pretty obvious Illinois needs better government, not more flavored milk.