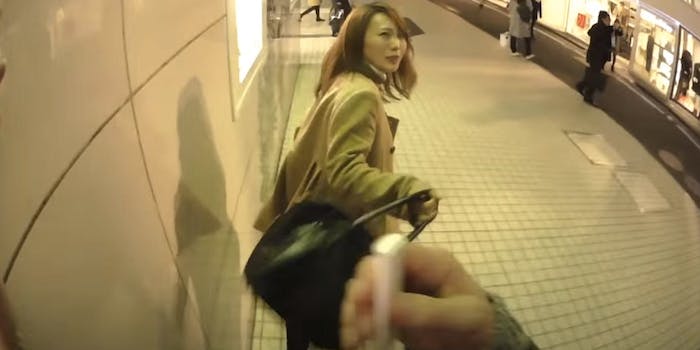 Finally, a tool to help men sexually harass women in other countries.

The new wearable translator by the Japanese company Logbar has serious potential. The Ili, which premiered at the 2016 Consumer Electronics Show (CES) in Las Vegas this week, translates around 10,000 words and phrases without using mobile data or Wi-Fi, and it’s about the size of an iPod.

Cool, right? Everyone’s going to want this. Until they see the commercial the company made to market the product.

Logbar posted its first Ili commercial, “Kisses in Tokyo,” to YouTube on Monday. The approximately two-minute video features a British man using the device to try and convince young Japanese women to kiss him. In the process, some of the women appear taken aback—while others actually hit him, scramble out of his grasp, and run away.

Basically, the guy is using the tech to sexually harass unsuspecting women on the street in a foreign country. The overall effect is infuriating and creepy—not only to feminists, but also to the majority of male viewers who left comments on YouTube and a viral Facebook post on the GaijinPot news page that was viewed over 2 million times in 24 hours.

Maybe the company thought the concept wouldn’t be offensive because they hired a handsome male model to do the creeping. And one of the Japanese women he approached reluctantly went for it, albeit under some obvious confusion. But most of the women—at least two of whom could be teenagers, it’s not clear—laugh until it’s not funny anymore and then they literally run away.

One woman in the train station reacts the way most of us would: by listening politely for about five seconds until the guy grabs her, at which point she gets pissed, hits him with her purse, and marches away.

So much for diplomacy.

The Ili only offers translation capabilities between English, Japanese, and Chinese—women in the planet’s other countries are safe for now. But soon Logbar plans to add more languages like French, Thai, Korean, Spanish, Italian, and Arabic. Just think of the disastrous possibilities.

The takeaway: Logbar’s Ili is such a cool product, and one that should be used for good rather than evil. Sexually harassing women on the street in any country, in any language, is not a viable form of entertainment. One woman’s purse slam is another woman’s kick to the balls, or worse.

Perhaps the new wearable translator could be best employed by women traveling alone. Phrases like, “don’t touch me,” “hell no, I don’t want to kiss you,” “stop chasing me,” and “back off before I mace you in the face,” clearly come in handy—as evidenced by this video.