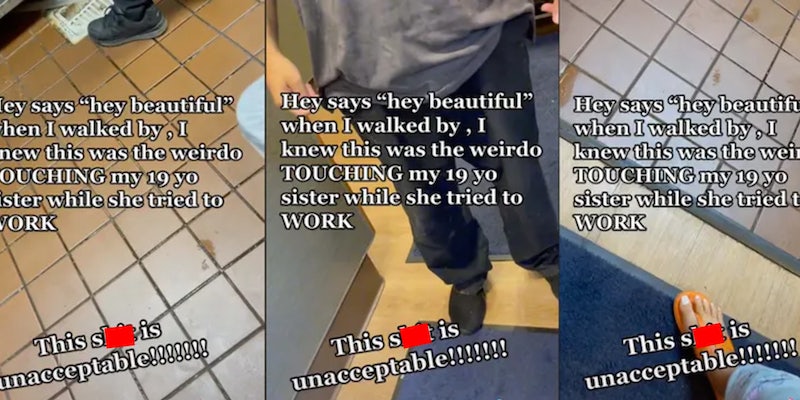 'Can we talk about how common this occurs in the work place?'

“If you ever put your hands, touch, or look at my little sister again, I will beat the fuck out of you,” @alexandriadaniell2 says. “Don’t touch her, don’t look at her, don’t smell her.”

@alexandriadaniell2 tells him he made her sister feel uncomfortable when he tried to kiss her.

In a follow up video, @alexandriadaniell2 shows screenshots of texts between her and her mother, who filed a police report on the man and made sure he was fired from IHOP.

“My mom was able to find his extensive record in three clicks,” @alexandriadaniell2 wrote in the caption of the video.

In another follow up video, @alexandriadaniell2 shows her sister and says that the man is much larger than her sister.

“Did you ask him not to touch you?” asks @alexandriadaniell2.

“Did he continue to touch you?” asks @alexandriadaniell2. Her sister says yes.

Commenters on @alexandriadaniell2’s videos rallied behind her and her sister in support.

“She can be 90 and if she didn’t say you can touch her, don’t touch her,” commented xjoselinnx.

“Can we talk about how common this occurs in the work place?” commented @iyanimarieexo.

According to a report from the Restaurant Opportunities Centers United and Forward Together, the restaurant industry is “the single largest source of sexual harassment claims in the U.S.” Restaurant workers that took part in the report said that sexual harassment is considered “kitchen talk” and becomes normalized in their workplaces.

Others in the comments shared their experiences with workplace sexual harassment.

The Daily Dot has reached out to @alexandriadaniell2 via a TikTok comment.

Update 3:41pm CT Sept. 12: In a statement to the Daily Dot, an IHOP spokesperson said, “ IHOP and its franchisees do not condone or tolerate harassment of any kind. We understand that the franchisee who employs the server decided to terminate its relationship with the individual. For more than 60 years, IHOP has strived to create a warm and hospitable dining experience for all guests, and this isolated incident is not reflective of that ongoing commitment.”