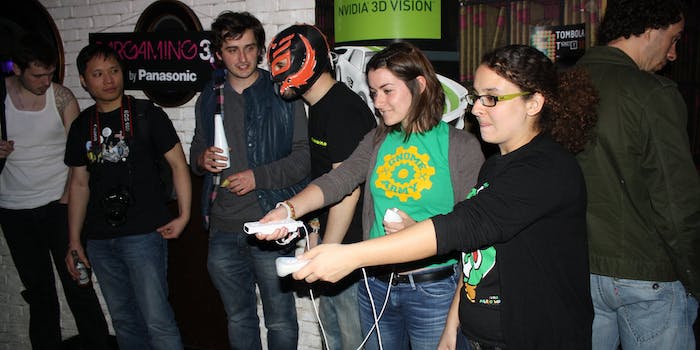 Will Idiot Nerd Girl soon be a meme of the past?

Dark Horse Comics editor Rachel Edidin has recently embarked on a campaign to “take back” the meme. In an August Tumblr post, she outlined her plan with sample images and a request that others follow her lead.

Recently, Edidin sat down with the Daily Dot to discuss her efforts.

Daily Dot: What kind of success/support have you seen since making your initial Tumblr post?

The volume of response and coverage floored me. The original post has about 4800 notes, and I’ve lost track of links at this point. Responses seem to fall roughly into two groups–people who immediately get where my frustration with the meme is coming from, and people who assume I’m completely missing the point–and while the majority of the ones I’ve seen have been the former, I think the best part has been watching the conversations that have come out of this, on tumblr, on the sites that have reported on or linked to it, and, to my surprise, on the meme itself.

DD: Aside from Tumblr, what other approaches have you taken?

This started as a casual project; it’s grown into something larger mostly on the initiative of folks who picked it up. I’ve talked and written about it pretty extensively–and posted a lot of memes–but, aside from generally continuing to address issues of sexism in geek culture, I’m not sure there’s a lot to be done. What other  approaches could I take? All I can think of is maybe asking quickmeme to take it down, which I absolutely wouldn’t do–there’s a critical difference between subverting the content and challenging its right to be there, and that’s a line I wouldn’t cross.

DD: In your opinion, what do you believe sparked the meme in the first place?

It seems like a direct offshoot of the “fake geek girl” bugbear that’s been floating around lately; where *that* comes from is a little more complicated. Super CliffsNotes version: For a lot of reasons, the geek community is primed to respond aggressively to newcomers, and particularly to female newcomers. Some of that comes out as direct aggression. Some of it comes more subtly, in the form of perpetually challenging or dismissing credentials.

DD: What other advice do you have for women in geek culture who wish to combat this Idiot Nerd Gir meme stereotype?

Just flat-out reject it. Don’t waste your time defending yourself to the identity police: that’s not a winnable fight, and it’s not worth effort you could spend engaging elsewhere. Don’t get caught in reductionist thinking and false competition–make sure to examine your own assumptions as well as challenging other people’s. Work toward a diverse geek community, with diverse points of identification and entry. Actively seek mentors and supportive communities. Find and hold on to the things that fuel your passion.

At the same time, understand that when you dive into geek culture, you’re diving into a lot of long-running and existing conversations. Be a good neighbor. Take time to listen and learn: basically, do all the stuff you should be doing anyway when you step into a preexisting community.

Honestly, this is all pretty gender-neutral advice.

For people already actively involved in geek culture: Don’t ignore missing stairs. Don’t excuse or justify harassment, and hold people accountable. If you’re in a position to speak up, do it. Call out bad behavior. Call out *good* behavior. Challenge assumptions. Be the mentors you wish you’d had.

DD: Do you have a favorite new “Idiot Nerd Girl” Meme of the submissions you have seen so far?

My favorites are the deadpan ones that just take her at face-value, i.e. http://www.quickmeme.com/meme/3quw1a/, and the surrealist derailments–stuff that falls under the general category of nonviolent trolling; with an honorable mention to whoever started throwing out Susie Derkins references. I’m not fond of the ones that are really hostile or depend on negative stereotypes of geeks–for me, the point is challenging the cycle of gatekeeping, not just changing its direction–but with any uncurated crowd project, you’ve got no real control over the range of perspectives it ends up representing. That was true of the original meme, too.

DD: Obviously, Idiot Nerd Girl”is itself insulting to the female geek community. What, in your opinion, should this “new” meme be called?

I’d honestly rather see the whole thing die off quietly. The new direction really doesn’t have the degree of exaggeration it takes to carry a meme; in that respect, it really is spoiling the joke.

DD: Is there anything else you would like to add?

A lot of the counterarguments have centered around the idea that the meme isn’t fundamentally sexist, which I think is an idea that needs to be addressed. It’s sort of true, for some of the memes, in a vacuum, but this doesn’t exist in a vacuum: it’s coming out of a culture that’s got a history of rabid misogyny, overt and otherwise, and it’s impossible to divorce it from that context. I would dearly love for geek culture to get to the point where the meme could exist, in its original form, without carrying those connotations, but it’s not there yet, not by a long shot. No one is suggesting that this one meme is what’s holding nerd girls back, nor that challenging it is going to spur a massive cultural shift. But to address the really blatant misogyny in geek culture, I think it’s important to examine and challenge the framework of microaggressions that support and reinforce it, and this is a convenient locus of ’em.