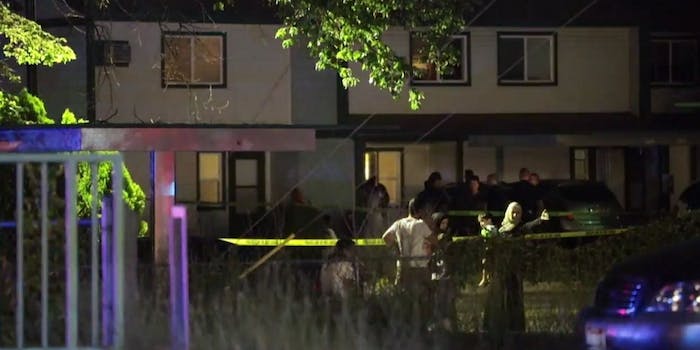 Some have life-threatening injuries.

A man allegedly stabbed at least nine people on Saturday night at an apartment complex in Idaho that houses refugee families, according to Reuters.

Timmy Kinner, 30, was arrested by Boise police and charged with nine counts of aggravated battery and six counts of injury to a child, according to the police department. Four of the victims were classified as having life-threatening injuries. Reuters reported that some victims were find inside apartments but others were discovered in the parking lot.

The apartment complex is characterized as “low income,” according to the Idaho Statesman, and it’s populated by a number of refugee families. Police said Kinner, who is being held without bail, had been a temporary resident at the complex but had been asked to leave on Friday.

“As you can imagine the witnesses in the apartment complex along with the rest of our community are reeling from this attack.  This incident is not a representation of our community but a single evil individual who attacked people without provocation that we are aware of at this time,” Boise Police Chief William Bones said in a statement. “Our hearts go out to the victims who are in the hospital tonight, please keep them and their families in your thoughts and prayers.”

While speaking to reporters, Bones said the apartment complex residents were a “tight-knit” community. When asked if it was a targeted attack, Bones said it was too early to comment on that.

Police said Kinner, who is from Los Angeles, is not a refugee. The motive for his alleged attack is not yet known, and it’s unclear what country or countries the victims are from.

In a tweet, Mayor Dave Bieter wrote, “Last night’s horrific attack does not represent Boise. Please join me in praying for the injured and their families. We must come together to condemn this vile act.”