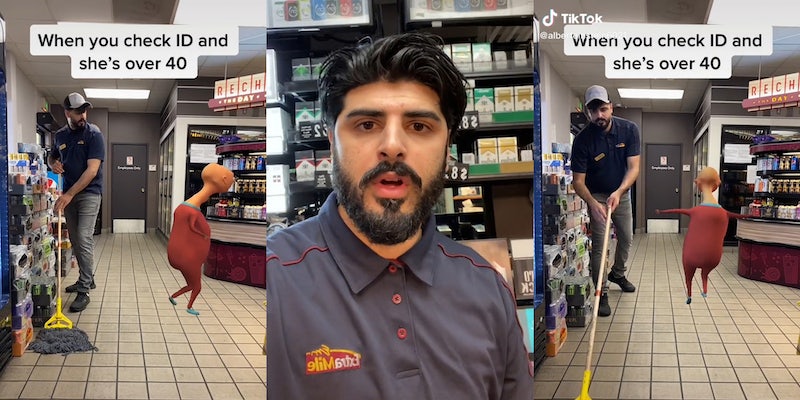 Gas station worker says IDs are checked because ‘young people be looking old,’ not the other way around

If you’re over 21 years old and still get ID’ed, it may not be because you look young. Instead, it’s because young people look old, according to one TikToker.

The TikToker, who goes by Mr. Obvious (@alberteinstein6021), recently posted a video explaining why ID’s are checked at the gas station where he works.

In the video, he acted out a scenario where he asks a customer for their ID, and they reply, “Oh my god, do I look underage?”

“No. You look a solid 31 years old,” Mr. Obvious replies in the scenario. “We’re not checking ID because your old ass is looking young, we check ID because young people be looking old.”

As of Wednesday, the video racked up about 307,000 views. Some viewers took Mr. Obvious’ explanation to heart, albeit jokingly.

“But why you had to hurt my feelings like that though. You couldn’t just let me live in that delusion. Swear to God I hate the Internet,” one user commented on the video.

“You just can’t let us have this one,” a second viewer joked.

“You didn’t have to be so rough,” another commented.

Another comment read, “Damn. I use walk out of liquor stores with a smile. You just wiped it clean buddy.”

In a comment, Mr. Obvious told viewers his video was meant in jest: “TikTokers relax, It’s just satire. I’m a solid 30 myself. You’re all young and beautiful!!!”

Jokes aside, some users said the TikToker was right about young people looking old.

“Young people do look so old nowadays,” another user wrote.

Other viewers took the situation too literally, pointing out that anyone selling alcohol is legally required to check the customer’s ID.”

“You check ID because of the government,” one such viewer commented. In reply to the comment, Mr. Obvious wrote, “You pass the bar exam… but fail the vibe test.”