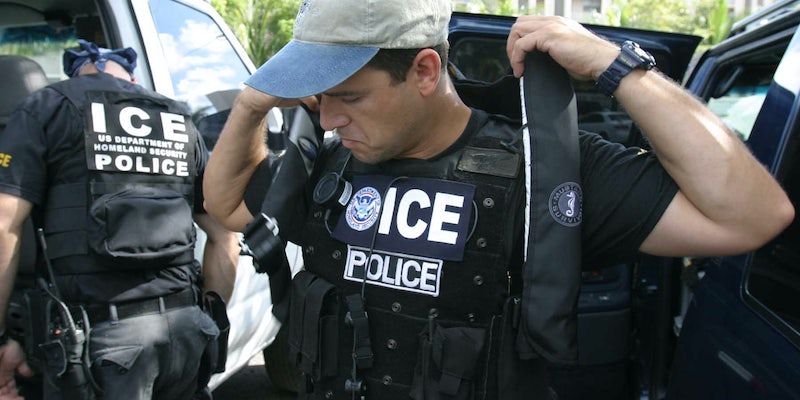 'Sometimes I think the segregation will kill me,' one detainee said.

Work within Immigration and Customs Enforcement (ICE) detention centers is supposedly considered “voluntary” for detainess. However, that didn’t stop ICE from throwing one detained undocumented immigrant into solitary confinement for refusing to volunteer.

According to the Intercept, Shoaib Ahmed, a 24-year-old who emigrated from Bangladesh to escape political persecution, was locked in solitary confinement in November for 10 days at the Stewart Detention Center in Lumpkin, Georgia. The reason: An officer overheard him say, “No work tomorrow.”

Ahmed had uttered the phrase in frustration for the center’s delay in paying him his weekly $20 for working in the kitchen. Ahmed said he worked for 50 cents per hour as a cook, mostly so he could call family in Bangladesh. Detained undocumented immigrants in ICE custody cannot be forced to work, and when they do, it’s often for as little as $1 a day.

And Ahmed’s not alone. According to the Intercept’s ongoing investigations, an ICE detainee at Ahmed’s facility was placed in solitary confinement for 30 days in June for encouraging others to stop working. Then in December, ICE detainees at a facility in California sued CoreCivic, the private prison contractor that runs both the California and Georgia centers, for being threatened with solitary confinement if they didn’t work.

“These big corporations are circumventing the traditional labor market,” Lydia Wright, an attorney who’s representing the detainees in the California suit, told the Intercept. “If they weren’t requiring detainees to work for $1 per day, they would have to hire cooks and janitors at minimum wage.”

While CoreCivic has disputed the use of the term “solitary confinement” to describe its holdings and asserts it complies with national detention standards, Ahmed told the Intercept that his experience was very similar to the general understanding of the term: His room was locked constantly; if he talked, the noise didn’t travel outside; and no one came to talk with him and others in confinement. He could raise his voice, or yell, but that would likely extend his isolation period.

Even the treatment Ahmed described was more intense than would have been anticipated. Daily, officers would handcuff Ahmed to take him outside for an hour of recreational time. Outside, he was put in a “cage” for one person. When he was given the opportunity to shower, for three times a week, he was also taken to and from the shower room in handcuffs.

“Sometimes I think I will be mentally sick,” Ahmed said of his confinement. “I feel pain in my head.”

At the time of Ahmed’s confinement, he had been in detention for more than a year; he was arrested in Texas after making a 3,000-mile trek from Bolivia to the U.S. border. As of late November, he expected to be deported to Bangladesh and didn’t know what the government would do once he arrived.

“If I go back to Bangladesh, I don’t know where I will go,” Ahmed said. “Maybe they will put me in jail, or maybe they will force me to leave the country again.”