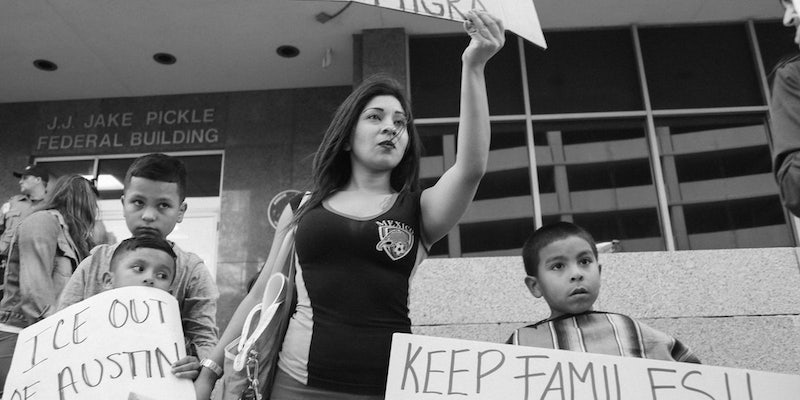 About 160 people were detained.

Protests broke out across the U.S. late this week in response to a series of immigration raids carried out in homes and workplaces by Immigration and Customs Enforcement.

According to the Washington Post, the raids, confirmed by ICE in six states and alleged by immigration activists in four others, appeared to be a first effort toward achieving President Donald Trump‘s campaign promise to deport 3 million undocumented immigrants with criminal records.

Approximately 160 people were detained in the raids this week, according to an ICE field director. Of those people, 75 percent had felony convictions, and the rest had misdemeanors or were undocumented. By Friday night, 37 people of those detained in Los Angeles were deported to Mexico.

#ICERaids around the nation are unacceptable. NYC will never turn away immigrants & refugees. We must rise, resist, repeat. #HeretoStay pic.twitter.com/Q4m7GC0oNd

ICE confirmed that raids took place in Atlanta, Chicago, New York, L.A., North Carolina, and South Carolina. Despite this week’s increased reporting of the raids, a spokesperson for the Department of Homeland Security told the Washington Post that the confirmed raids were part of “routine” immigration enforcement.

Immigration advocates, however, said they had documentation of ICE raids in the states of Florida, Kansas, Texas, and northern Virginia as well. They also alleged that ICE used roadway checkpoints to target immigrants for random ID checks in North Carolina and Texas, which ICE officials denied.

According to the Post, a video circulating on social media Friday appeared to show ICE agents detaining people at a shopping center parking lot in Austin.

According to James Barragán, a reporter for the Austin-American Statesman, the city’s general consul of Mexico has confirmed that 44 Mexican immigrants detained by ICE on Thursday and Friday were in his jurisdiction. According to another reporter, Tina Shively of news station KVUE, the number of Mexican nationals detained by ICE on Friday was six times more than the daily average.

The Austin community is standing up in solidarity with families being torn apart by recent ICE raids. #NoBanNoWall #not1more #ICEinATX pic.twitter.com/maJpcMGbpf

“I am asking ICE to clarify whether these individuals are in fact dangerous, violent threats to our communities, and not people who are here peacefully raising families and contributing to our state. I will continue to monitor this situation,” Castro said in statement, via the Dallas Morning News.

On Friday, Austin city council member Greg Casar called for bilingual volunteers via Facebook to help inform community members about their rights during the raids.

“ICE actions like these are beyond reprehensible. They instill fear in the community, and they make everyday people fear for their lives,” Casar wrote. “Trump and his allies will do everything they can to divide Americans, invoke fear in vulnerable neighborhoods, and demonize an entire community of people.”