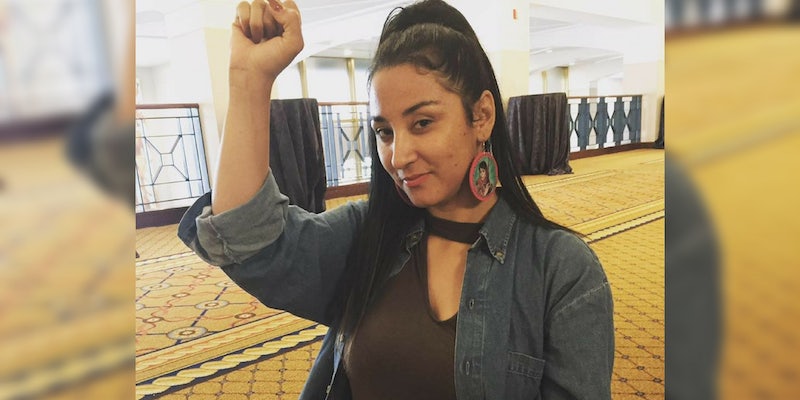 Alejandra Pablos is in ICE custody after following a routine check-in.

Immigration Customs and Enforcement (ICE) has detained Alejandra Pablos, a reproductive justice activist with the National Latina Institute for Reproductive Health (NLIRH) and former legal resident. According to Rewire, immigrant rights activists say ICE detained Pablos in “retaliation” for protesting outside a Department of Homeland Security building in Virginia in January, making her the latest immigration activism leader to be detained by ICE.

Pablos, who is also a member of abortion storytelling leadership program We Testify, said she was taken into custody on Wednesday during a regularly scheduled check-in with ICE in Arizona. Though Pablos fell out of legal permanent resident status more than two years ago after a drug-related arrest, she had sought asylum status for the “danger she would face as a political organizer” back in Mexico.

Immigrant rights organizers say that ICE agents called her deportation officer in Arizona and sought her detainment after local agents took her into custody following the January protest. ICE has denied targeting undocumented people for their advocacy positions, and told Rewire it no longer exempts “classes or categories of [undocumented migrants] from potential enforcement.”

“I went in today thinking that they were going to readjust my bond…ICE lied to me. I went in there in good faith. I’m doing everything that I can,” Pablos said in a Facebook video. “It’s been a long time that I’ve been going through this case and they’re trying to really separate me and tear our movement apart and tear our community apart, and I’m not letting that happen.”

Despite ICE’s denials of targeting undocumented activists, Pablos is the latest vocal advocate to be arrested in a string of recent detainments and deportations of such leaders. In January, ICE detained Ravi Ragbir, executive director of New York’s New Sanctuary Coalition, during a routine check-in with ICE agents. ICE also deported activist Jean Montrevil that month. In February, the Associated Press reported that ICE documents showed undocumented Mexican activist Maru Mora-Villalpando, who is facing deportation, did not come to ICE’s attention until after speaking out in an interview following a protest last year.

Immigration rights groups have sued over the targeting of advocates, are calling these types of detainments “silent raids,” detainments carried out during a person’s regularly-scheduled check-in with ICE.

“With few exceptions, ICE ‘check-ins’ are becoming ‘turn yourself in for deportation’ events,” Frank Sharry, executive director of immigration reform group America’s Voice, stated last year. “The Trump administration doesn’t need to rely on raids when these ‘silent raids’ advance their goals of sowing fear among immigrants and deporting whoever they can get their hands on.”