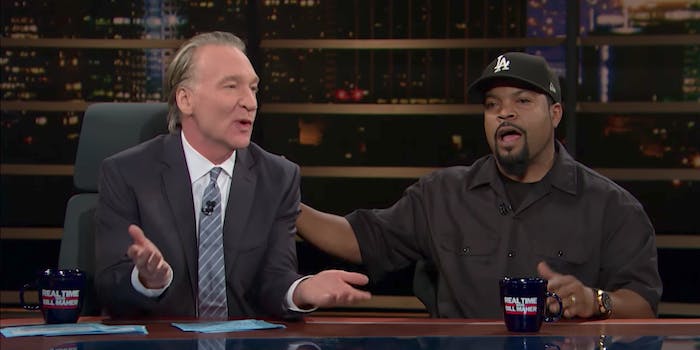 'It feel like that knife stabbing me, even if they don’t mean it.'

“I knew you was gonna fuck up sooner or later.”

During Friday night’s episode of HBO’s Real Time with Bill Maher, Ice Cube took the political commentator and sometimes-comedian to task for using the N-word during last week’s episode.

Bill Maher‘s latest racial “joke” incident happened amid a conversation with Sen. Ben Sasse (R-Neb.), in which Maher called himself a “house n****r.” The following day, HBO issued a statement denouncing Maher’s use of the word, and the host himself apologized, saying that he regretted saying the racist epithet.

But on last night’s episode, Ice Cube wasn’t about to let Maher off the hook so easily, asking him why he thought it was OK for him to say the word.

“Sometimes you sound like a redneck trucker,” the rapper responded to Maher’s assertion that his black jokes were jokes “against racists.”

While Ice Cube told Maher that he accepted his apology, he went on the explain how he himself witnesses the white people who use the term unapologetically:

“I still think you need to get to the root of the psyche because I think there’s a lot of guys out there who cross the line ’cause … they think they’re too familiar. Or, guys that, you know, might have a black girlfriend or two that made them Kool-Aid every now and then, and then they think they can cross the line. And they can’t. You know, it’s a word that has been used against us. It’s like a knife, man. You can use it as a weapon or you can use it as a tool. It’s been used as weapon against us, by white people, and we’re not going to let that happened again. … I know you heard it’s in the lexicon, you hear everybody talking, but, that’s our word, and you can’t have it back. ….

It’s not cool because when I hear my homies say it, it don’t feel like venom. When I hear a white person say it, it feel like that knife stabbing me, even if they don’t mean it…”

Symone Sanders, activist and former national press secretary for Democratic presidential candidate Sen Bernie Sanders (I-Vt.), expanded upon Ice Cube’s rhetoric, explaining how the context of Maher’s joke on house slaves whitewashed the reality of many enslaved women who worked in the house: They were brutalized and raped by slave owners.

“This is a teachable moment. … We have to remember that we still have some work to do. Maybe we need to take a group field trip to the National Museum of African American History and Culture … to put some visuals to the things we’re talking about,” Sanders said.

Despite Ice Cube’s argument, Maher seemed to fall back on a common reply to shut down calls against white people using the N-word, expressing his exhaustion with being lectured on the topic: “I think the people watching right now are saying, ‘That point has been made.'”