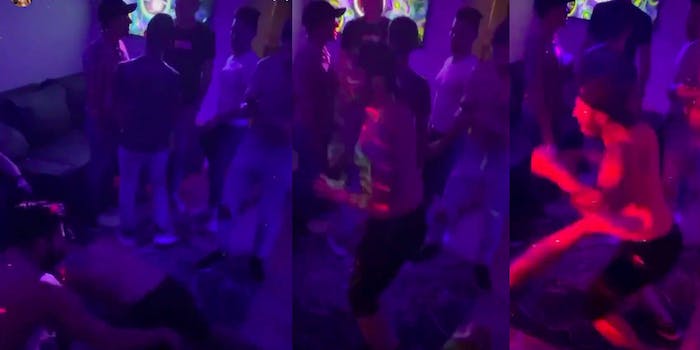 Videos of adult film performer Ian Frost’s Monday night “Rona Rave” are making their way around Twitter and upsetting many.

The videos feature Frost’s New York City apartment filled with men. According to LGBT Nation, “His party included at least one frontline medical worker, a pharmacist and roughly a dozen other men.” The people in the videos are not practicing social distancing, and not one person can be seen wearing a mask.

The party began Monday night and into Tuesday morning. One Twitter user alleges that the party took place on Sunday too, though there’s no evidence of that.

As content from the party began to circulate on social media, many of the attendees—including Frost—began to delete their accounts.

The DJ of the event, Alec Brian, was pictured with a face mask hanging from his neck. He went on to defend attending the event on Instagram, posting a screenshot of an apology that reads, “As many of us are now unemployed, I had an opportunity to avail myself of some needed money to pay my bills.”

“If I have insulted anyone or made anyone feel uncomfortable by this event,” he writes. “I sincerely apologize as that was certainly not my intent.”

Many continue to call the party-goers out on social media.

New York City Council candidate and drag performer, Marti Cummings, tweeted, “this is a slap in the face to every health care worker, every person who has lost a loved one, every person struggling with finances bc of shut down.”

In New York alone, there are over 319,000 confirmed coronavirus cases, with over 19,000 deaths. As of right now, the stay-at-home order instated by Gov. Andrew Cuomo ends on May 15, but he said that it will most likely be extended.