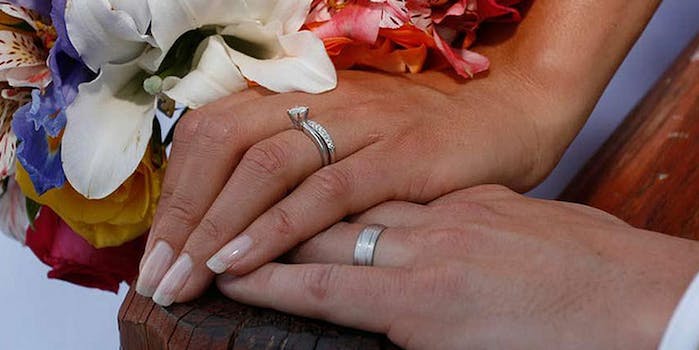 Can crowdsourcing (and a whole lot of cash) find this woman a husband?

Inspired by Lean In, an anonymous San Francisco businesswoman offered her friends $10,000 to find her perfect match.

Lean In, the new book by Facebook COO Sheryl Sandberg, has become a modern call-to-arms for women looking to take charge in their professional lives and, to an extent, their personal lives. And, like its ‘60s counterpart Sex & the Single Girl, it’s faced inevitable backlash.

The book’s mantra is that we can have it all. Over the weekend, a San Francisco management supervisor decided to test out that theory, and offered $10,000 to the person who introduces her to the man she marries. She sent out an email to a small group of friends who knew her and what type of man she’d want, and explained the light-bulb moment:

“I just finished the book Lean In. And whether you’re a fan of this feminist social movement is neither here nor there. What is here is an idea that came to me after reading this book. I thought, ‘I get it, I need to sit at the table. I need to be deeply committed to becoming a leader.’ Got it. I’m on it. And then I thought, ‘It’s 11PM on a Sunday night, I’m single, I just had to squirt dish soap on leftover pizza so I wouldn’t eat 2 more slices and this is the second self-help book I’ve read this month.’”

We’ve all been there, right, ladies? And then she outlined her plan:

“And so I’m writing you today because I’ve decided to make an aggressive action plan on finding that one fella that I get to hang out with forever. And I’ve recognized two things that are important to this plan: (1) a great percentage of marriages are the result of introductions by friends and (2) most people do not give a lot of thought about introducing one of their single friends to another one of their single friends. I get it. Introducing me to my husband is just not high on your to-do list. But I think I have an idea that might change that…I will personally give ten thousand dollars to the friend who introduces me to my husband.”

Speaking on the condition of anonymity, she told the Daily Dot that the idea to crowdsource a husband was spontaneous, and came to her after friends offering to set her up went nowhere.

“I thought there was no harm in offering up an incentive,” she says. “If I can be successful in my career, I figured I can translate that to my dating life, and I was comfortable sharing that I want to find someone.”

She says she’s gotten positive responses from her friends, and a few potential matches. But after her email ended up on the Internet, naturally she noticed more negative comments about her plan.

“If this was a man doing this, it’d be considered romantic,” she says. “But since I’m a woman, I have to justify it.”

Which is basically the crux of Lean In. And while faceless commenters have indeed judged her decision, it is a refreshing middle finger to soul-sucking dating sites and the Patti Stanger monsters of the world.

“Who gets you?” she says. “Your friends. I was realistic about the fact that [the email] was reaching .001% of the Internet. I respect people who want to do dating shows, and I’ve already been contacted by people offering up suitors, but the original intent was finding people I want to hang out with. That’s still the intent.”