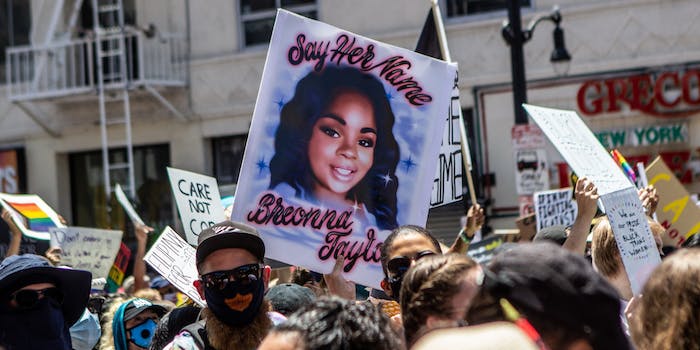 Hulu later deleted and apologized for the tweet, saying it was the 'wrong call.'

Following the announcement that a grand jury failed to bring substantive charges against officers involved in the fatal shooting of Breonna Taylor, Hulu is now being accused of using the outrage that stemmed from the decision to promote a new documentary.

On Wednesday, the Kentucky grand jury indicted former officer Brett Hankinson on first-degree wanton endangerment charges. The two other officers involved were not indicted, and none was charged with the killing of Taylor, which took place on March 13 in Louisville, Kentucky. The decision caused a widespread outcry of continued injustice regarding cases of police brutality, sparking national protests.

On Sept. 23, the same day of the incitement news, Hulu promoted the New York Times‘ documentary about Taylor’s death, The Killing of Breonna Taylor, which can be viewed on the streaming service.

“Breonna Taylor’s life was changing. Then the police came to her door. #NYTPresents: The Killing of Breonna Taylor traces the missteps of the deadly raid. #FXonHulu,” Hulu wrote in a since-deleted tweet.

The hour-long documentary is one episode of an ongoing series of short-documentaries produced by the NYT. According to Hulu’s description of it, the episode sets out to “examine what happened at 3003 Springfield Drive in Louisville, Ky., just after midnight on March 13, 2020, when police executed a warrant that resulted in the death of Breonna Taylor.”

The tweet immediately drew backlash, with many accusing Hulu of overt insensitivity and attempting to capitalize on the current moment around Taylor’s name and the Black Lives Matter for streams and ratings.

“This is HORRIFIC timing to release this trailer,” wrote one user in a responding tweet. “You are literally profiting off of black trauma while Breonna’s family, boyfriend and friends are still fighting for justice in memory of her human dignity. Disgusting. Has Hulu lost their minds?!?!?!”

Another user wrote, “Hulu does not care about Black women. And they will no longer be getting my money because of this.”

Following the backlash, Hulu publicly apologized and deleted the tweet in question, saying it was “quite simply, the wrong call.”

“Earlier today, we promoted content that we felt would be meaningful in light of today’s events… We’ve taken the posts down and are deeply sorry. Thank you for holding us accountable – we will learn from this,” it wrote.

The Daily Dot has reached out to Hulu for additional comment on the matter.