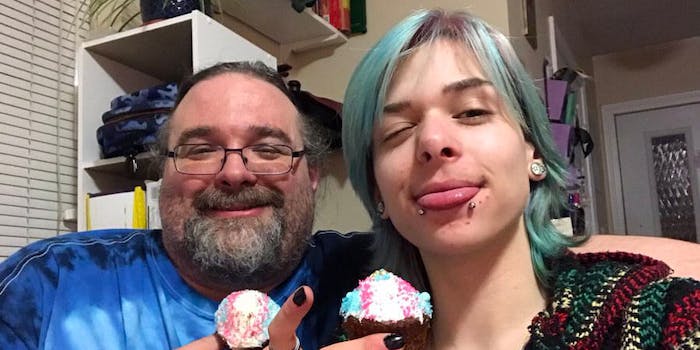 'God I could only DREAM of this level of love and support from my family,' one observer wrote.

Dave Scott, a father of two from Canada, melted the internet’s heart when he posted a thread about his trans-son celebrating one year of taking testosterone.

“So this month my 16yo Son started Testosterone,” Scott wrote. “Today he’s throwing a 1 yr T-Versary. My kitchen is full of teens playing “beer” pong and having Mock-tails, and we’ve got the chocolate fountain going. It’s a happy place. I’m worn out from running errands all day.”

Scott, who is an active LGBTQIA+ advocate on Twitter, gave a full play-by-play of the party, including his attempt at creating a “possible food crime” by dipping an onion in the chocolate fountain.

In addition to sharing the events of his son’s party, which included tacos for supper, Scott also took a moment to give some words of encouragement to his followers.

“Lots of love to everybody out there,” Scott says. “Remember, you guys are valid no matter how you transition or what your journey entails. And sometimes you can’t transition, so stay safe everybody.”

The thread ended with Scott posting a picture of himself and his son and their “trans-cakes.”

People were quick to commend Scott, whose thread now has more than 12,000 retweets, for being such a supporting and loving parent.

“God I could only DREAM of this level of love and support from my family when I realized I was non-binary,” one user wrote. “Bless your heart.”

“You have a beautiful family,” another user commented. “We should all be so lucky to have a loving supportive dad.”