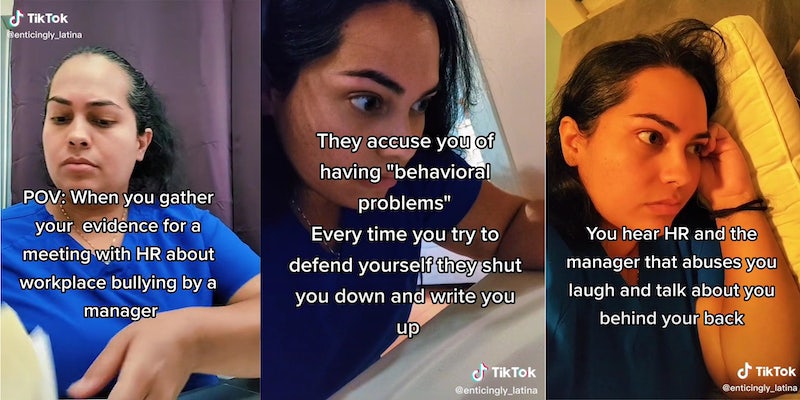 ‘You are gaslit, told YOU are the problem, nobody believes you, they take your manager’s side’: Worker says meeting with HR was ‘one of the most invalidating moments’ in her life

'HR is there to protect the company, not the employees!'

A worker says that she had “one of the most invalidating moments” in her life when she met with HR to discuss allegedly “abusive” behavior from her manager in a now-viral TikTok, saying that she was accused of “behavioral problems” and was written up.

In the video posted by TikToker Ana (@enticingly_latina) on July 30, she reenacts the process of “gathering evidence” of “workplace bullying” for an upcoming meeting with HR.

Text overlay reads, “POV: when you gather your evidence for a meeting with HR about workplace bullying by a manager. You gather all your paperwork and have all your evidence ready hoping justice will be on your side.”

The text overlay continues that Ana was “gaslit” and told that she was “the problem,” explaining that HR took her “manager’s side.”

“You hear HR and the manager that abuses you laugh and talk about you behind your back,” the text reads. “They accuse you of having ‘behavioral problems’ every time you defend yourself they shut you down and write you up.”

The video is captioned, “One of the most invalidating moments in my entire life” and has reached over 913,000 views as of Wednesday. In three follow-up videos, Ana lists the alleged abuse from her manager, including “disregarding” doctor’s notes after her gallbladder surgery, making “fatphobic jokes,” and greeting all other employees except for Ana.

In the comments, users warned against reporting workplace abuse to HR, suggesting that their job is to “protect the company.”

“HR is there to protect the company, not the employees!! Once you are perceived as a problem, it is their job to manage you out. It sucks, but true,” one user wrote.

“HR will ALWAYS take the manager’s side. Just leave, don’t bother telling them. They already know and will continue as usual,” another said.

“One of my best friends used to work in HR and she told me HR is there to protect the company, not the staff,” a third added.

While Ana clarified in a comment that she was later “fired” from the company, other users made suggestions on how to report workplace bullying without involving HR.

“As an HR [personnel] go to OSHA. I always tell people because I always think that can be my family member. It’s definitely hard being in that department,” a commenter said.

“File with OSHA, EEOC, and state your case with UE. Trust, you are not the only complaint. It may not help you, but it will help others,” another suggested.

The Daily Dot reached out to Ana via TikTok comment.