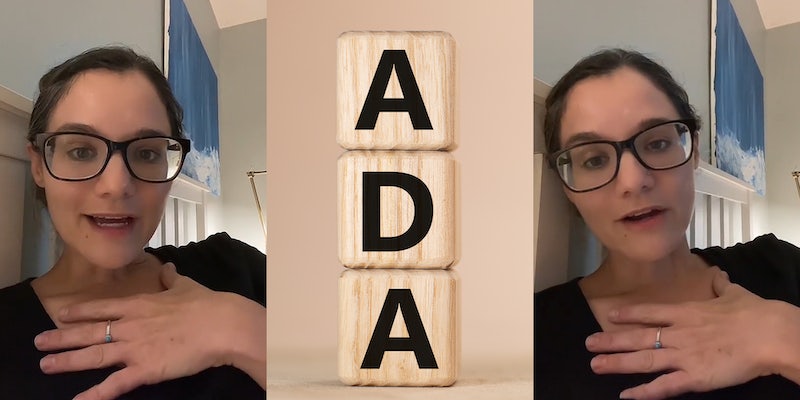 ‘I got fired from my job for requiring accommodations’: Worker exposes company HR for not reasonably accommodating her for her disabilities

'Just because they did not see an external struggle it didn't mean it wasn't there.'

A woman went viral on TikTok after exposing her employer for not accommodating her for her dyslexia and attention deficit hyperactivity disorder (ADHD.)

TikTok user Kristina Proctor (@adhdcoachktina) typically posts content about work and about having ADHD. The video is a stitch from another user where she asks the question: “what’s something you were not prepared for in the corporate world?”

Proctor answers the question, saying, “to have to explain to HR professionals and higher level managers that just because they did not see any type of struggle coming from me externally, that I still qualified for reasonable accommodation under the Americans with Disabilities Act.”

The creator further elaborates on this, saying how she kept having to reinforce to her employers that she needed accommodations. She claims that just because she didn’t appear to be struggling doesn’t mean she isn’t.

The video has been viewed 174,000 times since it was posted on Aug. 17, with many viewers outraged on the creator’s behalf.

“As an HR pro with ADHD I understand your struggle. I’m sorry you went through this and hope you got the accommodations u deserve,” one user shared.

“As someone in HR with ADHD I hid for many years, you aren’t wrong and I am so sorry you were failed,” another said.

Other people shared their experiences and struggles dealing with employers who refused to accommodate them for their disabilities.

“I had to fight on lighting only to have the lights adjusted back to before. I begged for dimmer lights so I didn’t have debilitating migraines,” one person shared.

“I had that issue with my IBS and HR thought I was kidding that it caused mental and physical issues along with stress,” a second wrote.

“My psychiatrist wrote a letter about my panic disorder and my HR denied it and tried to make me quit,” another stated.

“Yep, I got gaslit and ultimately fired bc of it. I would name & shame but they’d legit come after me,” one TikToker said.

“Bro I got fired from my job for requiring accommodations (it was technically legal),” another commented.

Some asked the creator what type of accommodations she was requesting and she replied in the comments, writing, “Lots of options! A few that are reasonable for many corporate organizations: office space with a door, agendas before meetings, meeting notes.”

The Americans with Disabilities Act (ADA), “prohibits discrimination against people with disabilities in several areas, including employment, transportation, public accommodations, communications and access to state and local government programs and services.” This act protects both companies and employers from discrimination based on disability.

According to the Department of Labor, they don’t enforce ADA but it does “offer publications and other technical assistance on the basic requirements of the law, including covered employers’ obligation to provide reasonable accommodations to qualified job applicants and employees with disabilities.” This act covers multiple disabilities including ADHD and Dyslexia.

Update 1:16pm CT Oct. 9, 2022: In an email to the Daily Dot, Proctor shared she has faced stigma regarding her neurodiverse diagnosis for years. Still, she said she has been lucky enough to have “incredibly supportive” supervisors over the years, while others “struggled with the concept of accommodations since they couldn’t ‘see’ the disability.”

As for her viral video, Proctor said she was able to connect with other people that had faced similar challenges.

“It showed many people that accommodations are something you can request through the Americans with Disabilities Act (depending on the organization’s size),” she said. “While you want to tread lightly and understand what the process looks like, it brought awareness to people with a neurodiverse diagnosis that they are legally allowed to ask for reasonable support.”

Proctor added that while you may not be able to see someone struggling, it doesn’t mean they don’t deserve support.

“Telling someone to just ‘find another job that supports them’ isn’t productive,” she said. “We do have to talk about how stigma against people in many disability groups prevents our society from learning, growing, and seeing new perspectives.”