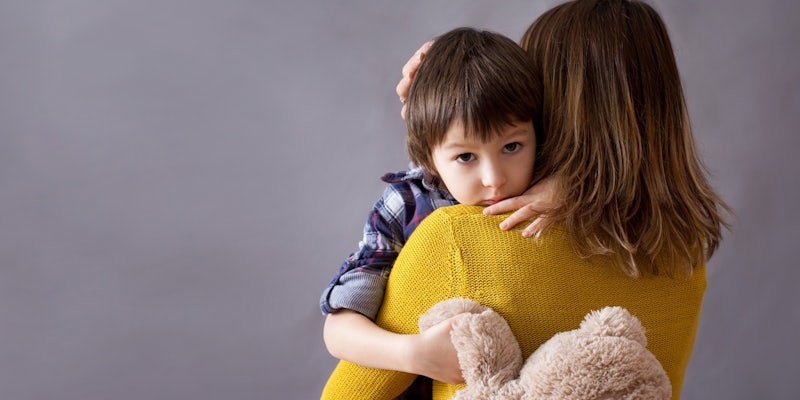 Yesterday I dreamed of waking up and telling my daughter that for the first time America had elected a female president. This morning I found her sitting outside of her room with a shoebox full of things she had made: pictures of fairies, scraps of foil and ribbon, and cut-out hearts. “This is for anyone who needs a present,” she said.

Then she asked me if Hillary Clinton won. She had been so excited to sit with me in the voting booth and help me cast our historic ballot for the first female president. All day she’d been running around singing, “Who rule the world? Girls!”

I had no idea what to tell her. And I am not the only parent at a loss. Last night, a friend of mine, who is Muslim and has five daughters, messaged me to ask, “What do I say to my girls?”

Even if you did vote for Trump, or you cast your ballot for a third party candidate, the next couple of years are going to demand a constant reckoning with the gap between who we tell our children to be—kind, just, and fair—and who we have just put in the White House. It will require explaining not only the anger of others, but our own anger and frustration and fear.

In a Twitter thread on Wednesday morning, “Ask Polly” advice columnist Heather Havrilesky offered some advice on what to tell our daughters about Clinton’s loss, writing, “Don’t let little girls believe that this is just the way it goes for women. Don’t let them be as resigned and world-weary as you’ve become.”

Don't let little girls believe that this is just the way it goes for women. Don't let them be as resigned and world weary as you've become.

New Yorker writer Emily Nussbaum tweeted about her own parental anxieties about the election, which led to hundreds of people weighing in with their own advice and perspective, both as children and as parents.

People I know are talking about how to cope with this with their kids, espec girls. Because it's terrible but you don't want to scare kids.

Washington Post advice columnist Amy Dickinson had more practical advice on handling the immediate aftermath of the election. She told the Daily Dot via email that parents should reassure their kids and let them know that no matter what, “We will be OK.” “We need to explain to our children that democracy is large, loud, and messy. Democracy is like the playground at the busiest time—kids climbing, kids sliding, everyone doing something different. But our country is amazing because we have different presidents every four or eight years, and we find ways to live peacefully and according to the values we believe in, no matter who is sitting behind the desk.”

She also encourages parents to show their children Clinton’s concession speech and remind them that “the values your family held dear yesterday are still the family’s values today. And that everybody will be working very hard to make sure the country is good for all kids and all people.”

This morning I told my daughter that Clinton lost. I hugged her and told her that she was brave and kind and smart and she could be anything she wanted to be. Part of me didn’t believe that last part, but just saying it out loud helped.