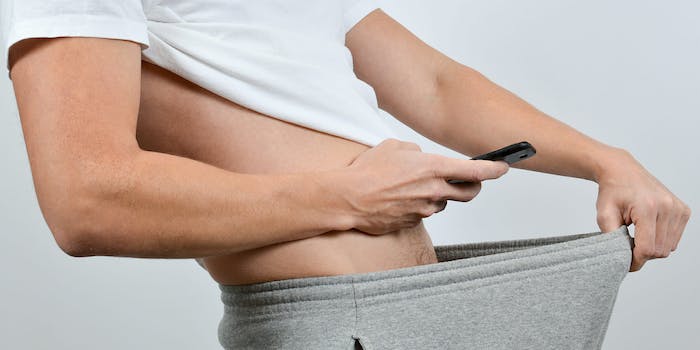 The key to a good d*ck pic is consent, according to the internet’s foremost expert

Let the founder of 'Critique My D*ck Pic' show you the way.

How to take a dick pic

This is the idea behind the iconic Tumblr account, Critique My Dick Pic. Maybe you have heard of it? If not, it’s precisely what it sounds like: A long scroll of real dick pics, lovingly pored over by an internet curator and awarded a grade. All pics are to be submitted only by the owners of said dicks and are awarded an A through F, according to the blog’s subjective sliding scale.

Freelance writer Madeleine Holden launched CMDP five years ago, after noticing that the general quality of dick pics was not only “appalling,” but also “artless and dull.”

“Not only are they usually sent unsolicited, which is hostile and awful,” she tells the Daily Dot. “I started CMDP as a kind of public service, to elevate the form and also to kick off a discussion about consent, nude sharing culture, and human sexuality.”

Holden says the goal is not to critique the dick itself—this is not a literal dick-measuring contest—or the sender’s body. Rather, it’s to analyze and grade the stylistic elements of the photo, with an eye toward teaching us all how to make a more appealing, respectful, sex-positive nude. And to emphasize one thing above all: A good dick pic only works when the receiver asked or agreed to see it.

So, why do people send dick pics?

Science suggests that penis-havers send dick pics because they may miscalculate the recipient’s interest level. These senders often overestimate the recipient’s interest in a surprise photo of their throbbing erection and thus reveal some interesting things about the overinflated nature of their egos. Damningly enough, evidence also suggests that people who frequently send unsolicited dick pics tend to chart higher levels of narcissism, psychopathy, sadism, and Machiavellian traits.

These stats do not surprise Holden. Although all the nudes displayed on her site are nudes she solicited (she invites dick-havers to send submissions to [email protected] and will take a photo down if someone requests it), she says those who fire off non-consensual dick pics display certain qualities. “My instinct is that they’re the type of people who are hostile to consent, autonomy, and probably viewing women as fully human,” Holden says.

If you’ve ever received an unsolicited dick pic, you may have wondered: Why did this person think I wanted to be bombarded with a close-up of their junk in the middle of my morning all-hands meeting? Why did they think I wanted to see their shiny shaft on my phone screen before I’ve seen it in real life? Who is this Tinder date, and how many others received this nude today?

Given dick pic senders’ murky motives, a sensitive study of the medium seems overdue. To achieve the phallic clarity you want and deserve, we asked Holden how to take a good dick pic. Here’s what she had to say.

Q&A with Critique My Dick Pic

DD: Do you recall the first dick pic you ever received, whether that’s for the site or in life or (ideally) both?

Holden: I can’t remember the first dick pic I received in my personal life, but I know it would have been unsolicited, and I would have been very young, and I think that’s true of lots of women and girls, and I think that’s disgusting. The first dick pic I received for the site was a more pleasant experience because I was excited to see how the project would shape up. It became apparent really quickly that I would have no trouble with participation rates, so to speak.

Do you post every submission you receive? Roughly how many dick pics do you get in a day?

I absolutely don’t post every submission I receive. In fact, I post much fewer than even one in 10 submissions I receive. There are just too many! I usually receive between 50 and 100 dick pics per week.

How much of any given day do you spend sifting through dick pics?

I usually spend a few hours on a Saturday taking care of the dick pic emails. The rest of the time, I have other work to be doing, yes, and prefer not to think about or look at dick pics.

When they submit, do senders ever explain why they’re sending in their nudes?

They don’t tend to, but sometimes men will say they’ve finally gathered the confidence to take and send a nude because of the body positive tone of the site. Another reason that comes up quite a lot is long-distance relationships, and wanting to keep some sort of sex life alive by sending nude pictures.

What catches your eye in a dick pic?

Being too zoomed in, being too focused on the dick itself, having a desperate preoccupation with size, and failing to take into account the desires of the recipient.

Do people ever email you to complain about their grades? And how do you handle it?

Very rarely, which is lucky! I can think of maybe one or two quibbles in the five years or so I’ve been running the site.

Do you deal with a lot of harassment in your Tumblr-associated inbox, and can you tell me about any of those scenarios?

I don’t look at my Tumblr inbox, but generally, the level of harassment was fairly low there before I stopped reading it. I think that’s because, while it’s easy to find my name on the rest of the web, it’s not immediately apparent from the site that I’m a young woman. I do receive the occasional leery comment, but in general, people are overwhelmingly respectful, which has been a nice surprise. I suppose I have an incredibly intimate image of them, so it wouldn’t make much sense to be abusive.

Anything else you’d like to add about the world of dick pic critique?

A lot of men, when they hear about the project, say, “I’ve never taken a dick pic!” and I think that’s fine, and perhaps to be encouraged. But if you are going to take a dick pic, send it only to someone who expressly wants to see it, and for god’s sake take a good one.