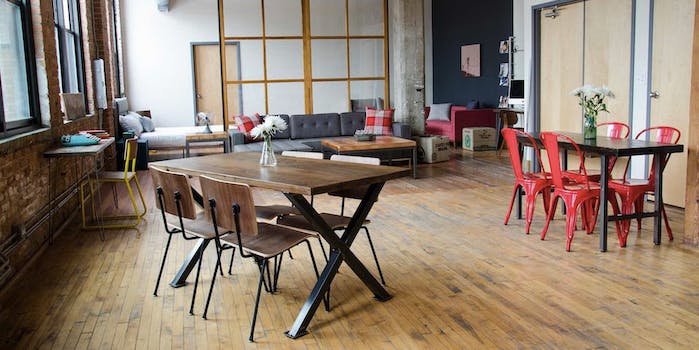 We spoke to three successful business owners who got their big break on Etsy.

Etsy is a seemingly endless flea market of knick-knacks that you can browse from the comfort of your home. But despite the vastness of the online crafts market, there are a handful of businessmen and women who manage to rise above the fray to create very real—and very lucrative—Etsy shops. 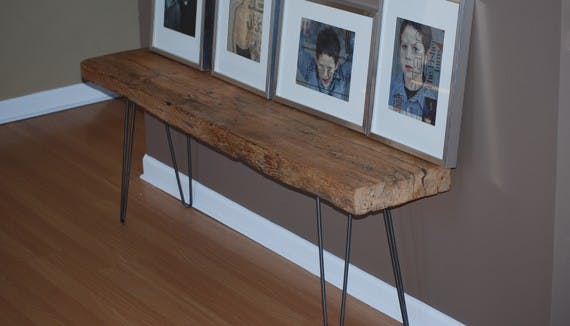 In 2014, Erin True, the founder of the industrial wood furniture site Urban Wood Goods, reported that she made $1.3 million in sales. Of that revenue, one quarter came from Etsy, the platform she originally used to launch her custom furniture company.

Before she started her business on Etsy, True was an art teacher in Illinois for eight years. She always kept busy with creative side projects, but back in 2010, she decided to build a wooden bench and try to sell it on a hastily made Etsy shop. “I was never intending to make a business out of it. It was an experiment. I never thought it would sell,” she told the Daily Dot.

“The whole idea of having a business online selling furniture was crazy to anyone I told.”

Most of the entrepreneurs who point to Etsy as the start of their success consider it just that: a starting point. True, for example, runs a successful independent website and gets business through alternate routes. But five years ago, it was an entirely different story.

The reclaimed wood bench sold within days, leaving True little time to figure out the logistics of delivery. (Luckily, the buyer was in Detroit, a short enough drive from True’s hometown in Chicago, so she delivered it herself.) She launched the full-fledged version of her Etsy store a year later. 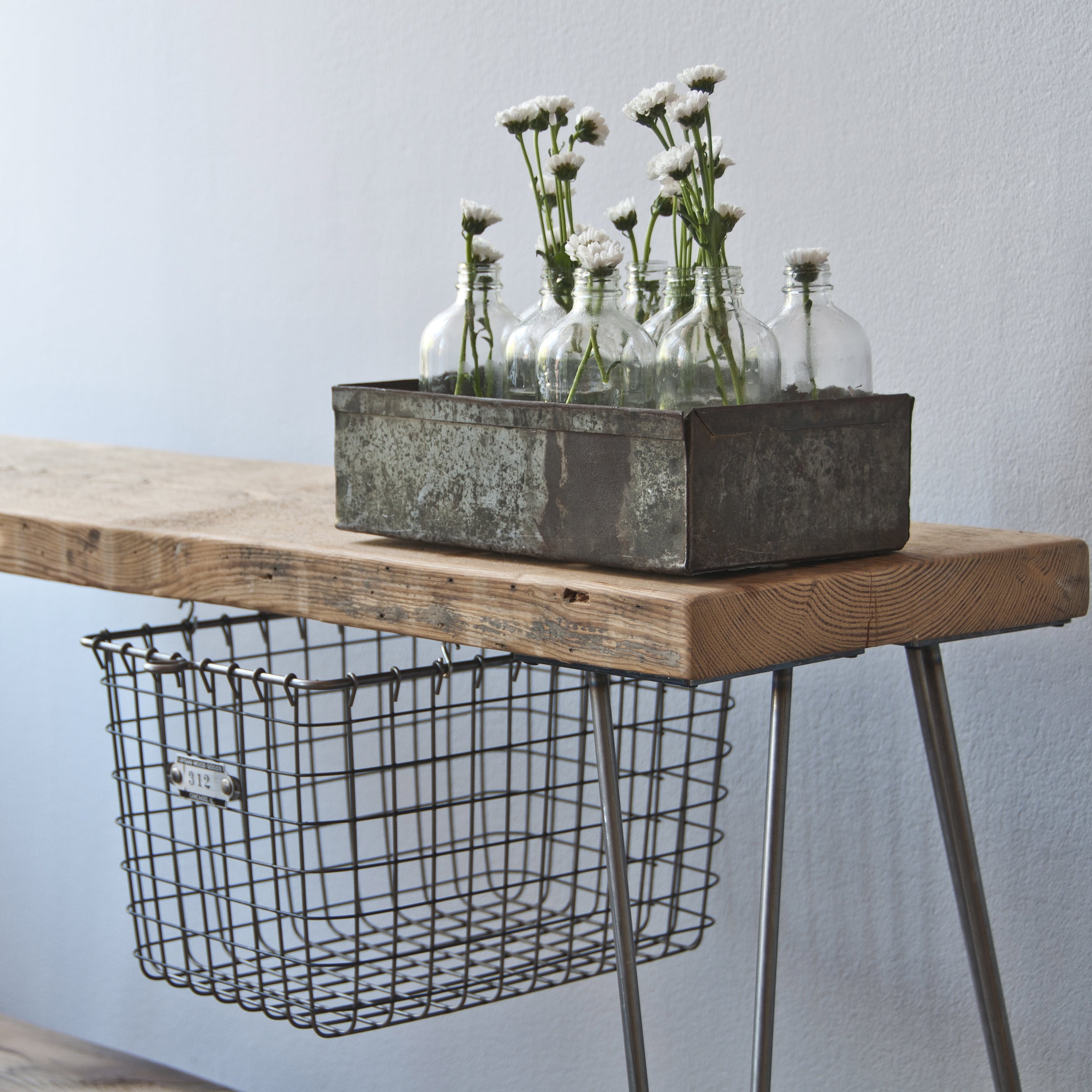 With no woodworking experience and no business background, True borrowed $400 from her then-fiancé (now husband) and drove to a reclaimed wood supplier three and a half hours away to pick up enough raw material to build more pieces. “The whole idea of having a business online selling furniture was crazy to anyone I told,” she remembers.

But apparently, it was crazy enough to work: After True’s husband quit his job to help get the business off the ground, they rented a 3,000 square foot space and hired five employees. Over the next few years, Urban Wood Goods would grow revenue by 30% each year, even as Etsy took 3.5 percent of the profits. (That’s the standard share Etsy takes from all of its stores.)

“It’s hard to work with your spouse, but I wouldn’t have made this progress without him. Us as a team got us to where we are today,” True said.

It hasn’t been an easy road for Urban Wood Goods. True said she had to learn many lessons about managing people the hard way, after having three former employees rip off her designs. But with her Etsy store pulling in $270,000 in 2014 alone, it’s hard to have many regrets.

“I wouldn’t change anything. It’s been an amazing adventure starting this business,” she said.

Nate McPherson opened an Etsy shop for his budding male-focused wedding band company back in 2007, shortly after the site first launched. But it was inactive until 2010, when he had an epiphany.

“I realized ‘Oh my god, people are making a shit-ton of money on Etsy. What are we doing?’ So I ran to try it again,” McPherson told the Daily Dot. 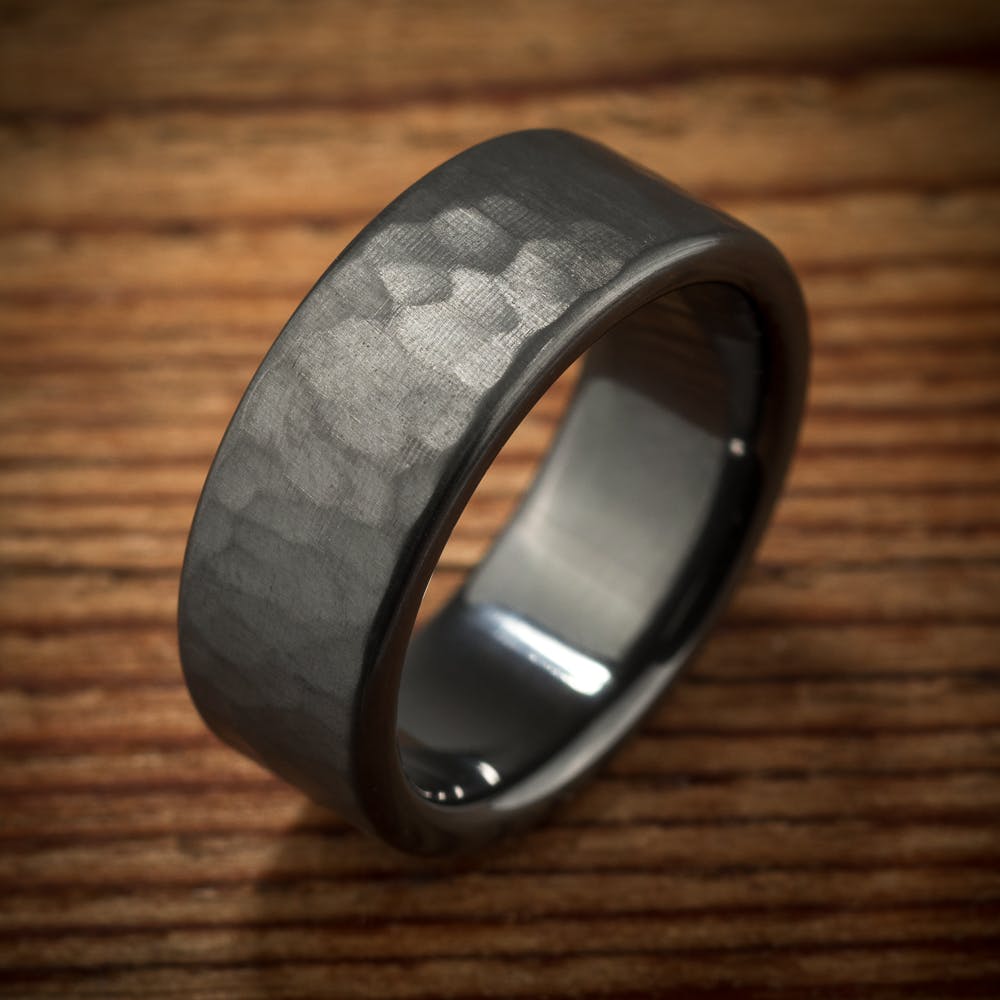 McPherson originally founded his jewelry brand, Spexton, in 2003 with husband Greg Shelton. At the time, they were selling designer underwear to the after-bar crowd out of a retail space in downtown Tulsa, Oklahoma. But as luck would have it, there was a metal shop in the back where Greg could experiment with metalworking, where the first 100 Spexton wedding bands were made.

At first, McPherson and Shelton sold the stainless steel and titanium handcrafted bands a few feet in front of the store. “We literally spent every dime we had in our bank account to start making these things,” McPherson said.

“When you want to point to the money source, that’s Etsy.”

But when they started selling on Etsy, it “changed everything,” McPherson said. “Suddenly we weren’t just depending on the local world. Overnight we went from one tax bracket to another.”

Still, McPherson is careful to point out that the Spexton success story is not at all typical. If you’re a growing crafts business, putting all your eggs in a handwoven artisanal Etsy basket could be risky. “This [Etsy bubble] might not last,” he said. “Who knows what’s gonna happen to it [Etsy]?” 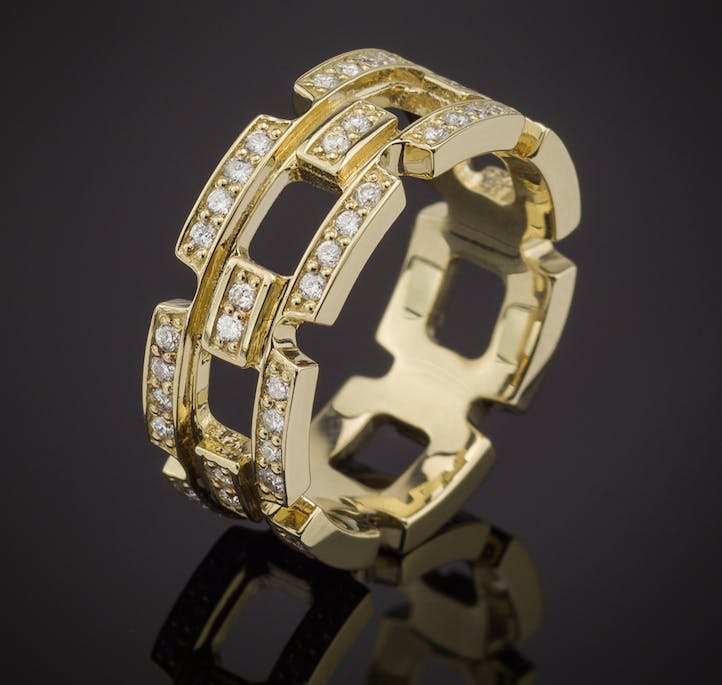 On Mar. 4, Etsy filed to go public in preparation for its highly anticipated IPO. But their sellers have been giving little indication as to what that might mean for them. Even those as successful as True and McPherson have been kept in the dark as the marketplace giant plans to sell shares in its growing fortune.

“Our whole existence is in the balance with people we’ve never met,” McPherson said. “There’s that fear built in.”

For this reason, McPherson and Shelton decided to open a retail store to supplement their income. But for now, Etsy is their cash cow.

“When you want to point to the money source, that’s Etsy,” McPherson admitted. “I don’t know what I’d be doing without it.”

While McPherson wouldn’t provide exact Etsy sales figure, he said Spexton can sell three or four rings every day, which usually accounts for 25 to 50 percent of the company’s total sales.

When Emily McDowell’s greeting card from her Etsy shop was posted on Etsy’s Facebook page in 2013, it was included in a BuzzFeed round-up. Suddenly, McDowell was catapulted into success.

“I just started drawing stuff and my friends were like ‘You should sell these,'” she told the Daily Dot. “I hadn’t thought about building a brand in that way until people started responding the way they did. Etsy was the easiest way to start selling”

After 10 years in advertising, McDowell decided to quit and do some freelancing while figuring out her next move. She realized that people were really into homemade custom print cards she was creating for friends. The cards were alternately snarky and heartwarming, and she thought she might have hit on something big.

“I really felt like I had something that would resonate emotionally with people,” she said.”

The card that started it all was this Valentine’s Day missive. 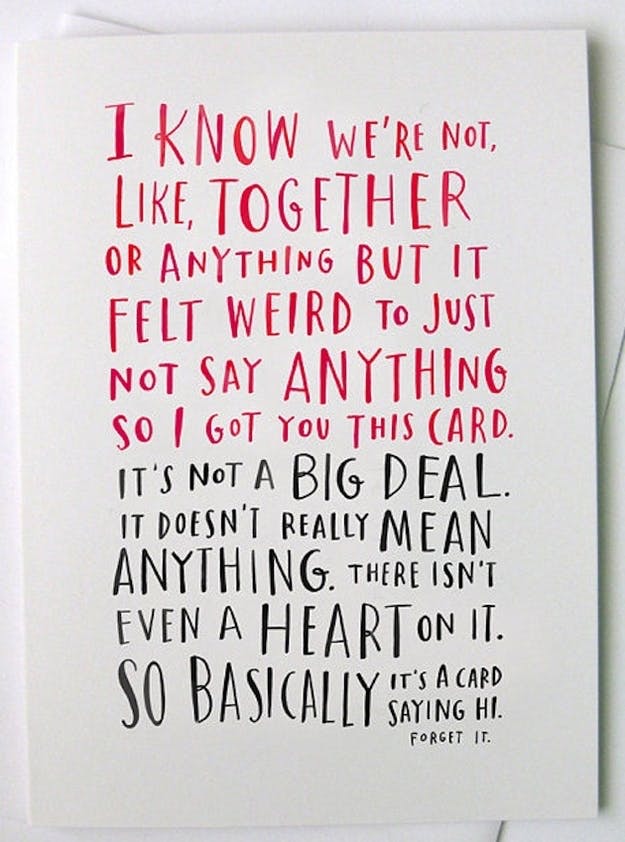 McDowell’s cards predominantly feature pithy phrases, as well as sentiments of her own creation. She tries to copyright as many of them as she can, but even so, like True, McDowell has encountered Etsy copycats. (The website’s copyright and intellectual property policy vows to take down sellers who infringe on others’ copyright, but copycatting is so rampant Etsy can’t possibly keep track of all offenders.) McDowell says she sends messages at least once per week to other sellers to take down products that rip off her work.

Another challenge of setting up an Etsy shop is establishing yourself as a brand. Ironically, this becomes increasingly difficult the more popular you get on Etsy.

“As you get bigger as an Etsy seller, there’s little opportunity for branding,” McDowell says. “People say ‘I bought this on Etsy,’ not ‘from Emily McDowell’s shop.’ Etsy supersedes the brand of the seller.”

“As you get bigger as an Etsy seller, there’s little opportunity for branding.”

But the hardest part of all is the sheer scope of the competition in the marketplace. While McDowell has clearly risen to the top, she’s competing against millions of similar greeting card sellers, and she’s well aware of how tenuous her foothold in the market is.

“Etsy is a wonderful platform, but there are also millions of sellers on Etsy,” she said. “It’s a myth that it’s easy to open a shop and make a ton of money.”

It might not be easy, but there’s no denying that McDowell has done it. She reports she earned $1.5 million in 2014, mostly from wholesale deals with retailers like Urban Outfitters. While her income from Etsy represents only a small portion of her revenue, without the exposure McDowell initially gained from the website, the wholesale deals might have been a pipe dream. 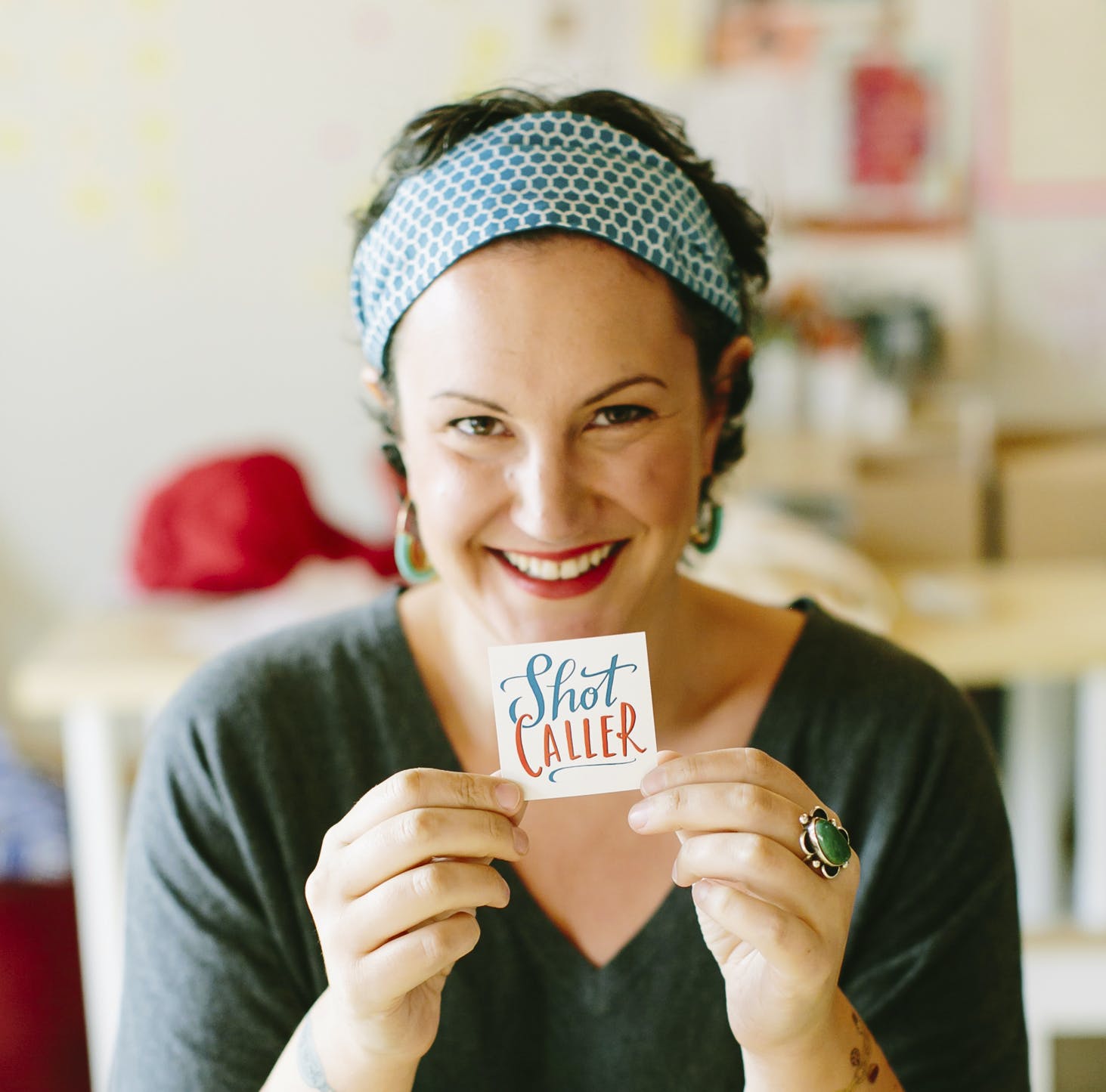 Success in e-commerce is more often than not ephemeral, and most Etsy sellers won’t even make hundreds of dollars, let alone thousands, from hawking their wares online. But the website provides a springboard for people without a business or entrepreneurial background, who might not have otherwise had the tools to launch a full-fledged business.

As True put it, “I think Etsy is the best place to start, but you gotta do your homework.”