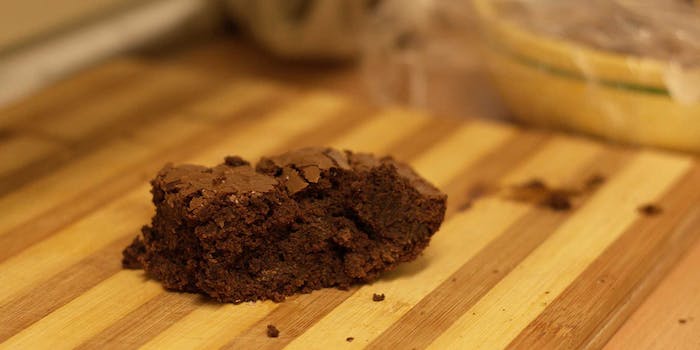 Eating pot is the highest high marijuana has to offer. Ride the wave with caution because you can’t get off until the drug says so.

When the New York Times’ Maureen Dowd first tried to eat a caramel-chocolate marijuana treat in pot-legal Colorado, she ended up lying motionless, anxious, and paranoid in her bed for about eight hours. For you journalism students out there, I think they call that first-person reporting. For you potheads, that’s tripping your balls off.

I can relate. My first time eating a brownie treat left me motionless on a couch for hours, unable to get up for food, drink, or the apocalypse. I hadn’t intended to go comatose but when a novice eats too much marijuana, the results can be very strange indeed. Thank god the television was on and that friends were nearby or else I might have thought I had died and gone to 1-800-Mattress hell the way that poor Maureen Dowd did at the age of 62.

Edible marijuana treats are much trickier than other methods of getting stoned. Ingestion in the stomach as opposed to the lungs means the effects of pot come slower than smoking, leading people to eat too much of it. Once the high does arrive, it lasts longer and packs a hell of a punch. If you’ve ever felt strange or paranoid when smoking, imagine those bad vibes potentially multiplied when eating.

When someone smokes pot, it’s easy to regulate how many times they inhale because the effects are almost immediate. Sure, you might eat an entire cake, but that’s as bad as it’s probably ever going to go.

When a user eats the drug, it takes experience or, better yet, guidance to make sure things go as intended. Otherwise, it’ll lay you flat on your back whether you’re prepared for it or not.

Eating pot is the highest high marijuana has to offer. Ride the wave with caution because you can’t get off until the drug says so.

Dowd’s pot treat, even though it was legal, had no good instructions on the label. That’s a regulatory oversight that should be fixed. Pot needs to come with dosing education so that consumers know what they’re getting into. My pot treat, illegal and poorly packaged in tin foil, also came without any advice, so I just ate the whole tasty thing and hoped for the best.

The trick to not tripping off the deep end, then, is to eat the right amount of weed. How do you measure that? First, you need to exercise caution.

In the lands where pot prohibition still reigns, you’re probably getting edibles from unknown sources. You also probably have little or no idea how powerful the cannabis oil or butter you’re eating is. You can thank the law for these blindspots.

This can and probably will still be a grand old time but you should approach this situation with caution. Eat single bites of the the treat and be prepared to wait over an hour before the effects are really felt. You can complement edibles with smoking or some other method of ingestion but the cardinal sin, the single most common mistake that most edible newbies make, is to keep eating when they don’t feel anything. Then, when the show finally does start, the consumer is overwhelmed completely.

The other option is to cook it yourself. This takes time—it’s baking, after all—but leaves you knowing exactly how much pot is going inside you and therefore much more capable of making a responsible decision about consumption.

Dowd, not exactly a lifelong stoner, didn’t know what she was doing. It’s easy to laugh at her but, now that the drug is legal, a lot of new consumers are going to be in that same situation: new, eager, and ignorant of what to do next.

The best solution, of course, would be a responsible legal option that has a truly informative label. That way, instead of blindly buying from dealers, you can buy from a transparent business that adheres to health laws and regulations. Sounds like a much nicer high to me.

In lieu of that, you have to take it upon yourself to take a crash course in marijuana cooking. If that sounds like a little bit of a drag, chin up. Once you eat that frosted cupcake and feel pleasantly stoned instead of deathly paranoid, you’ll be happy you took the enlightened course of action.