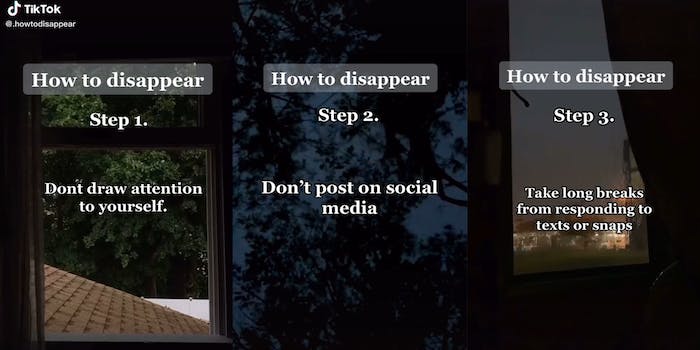 While their disappearance has not been directly linked to the trend, there is suspicion that they were inspired by it.

The hunt for two missing teenage girls in the U.K., who were eventually found safe on Monday, exposed a TikTok trend in which teenagers are being urged to go missing—either online or in real life—by choice.

There are numerous posts partaking in the trend on the platform, using hashtags such as #disappear, #howtodisappear. Some are also accompanied with #heartbreak.

Most of the posts come from accounts that claim to help their followers, who are likely teenagers.

The Daily Dot can confirm that, as of Thursday, there are at least 56 such TikTok accounts. The following on these accounts, which has some variation of “how to disappear” in their username or bio, ranges from zero to 16,500 followers.

The videos seem to have started as early as February, and some garnered hundreds of thousands of views.

User @howto._.disappear, a TikTok account with only 3,419 followers, shows viewers “How to disappear” in its only video on the account. The video has over 136,000 views. The video advises followers to switch off their locations but provides no further information.

Another account, @howto.disappear.now, posted a series of videos, each with one step on how to disappear. The steps include giving up hobbies, social media, and distancing oneself. The second to last step encourages followers to “stop trying.”

One video by a user, whose bio reads “how to disappear lol,” says the first step is to “start taking longer to respond to texts.”

Other steps in four different videos urge followers to “leave your friends behind.”

Another video shares information on how to “completely disappear” from school.

The same user recommended to another viewer who wanted to “disappear IRL not just online” that they should slowly stop talking to their friends.

Not all of the videos are explicitly advocating for viewers to go “missing” in real life, however. Some of the users appear to believe they are somehow helping people in need or guiding those who are suffering from mental health conditions. They even offer to answer any followup questions their followers may have.

For example, when asked by a follower how they would disappear given that they are talkative and their absence would be immediately noticed, @.howtodisappear advised that they should “slowly start transitioning to talking less by giving small responses.”

Some of the videos include disclaimers, such as “I don’t want anybody get hurt” or “I am doing this for fun.” Some also note that the steps should merely be used to take a break and that viewers’ aim should be to eventually “come back.”

Despite the disclaimers and/or lack of potentially harmful content, the comments on these videos are telling of the audience they are reaching: Many in the comments sections are talking about activities bordering on self-harm or violence.

“Sometimes I paint myself blue and sit the bottom of the pool and pull little kids legs down and drown them,” wrote one user in a comment.

“HELP I WANNA DO IT” one user commented, seemingly referring to disappearing. The user prefaced the comment noting that they can’t do “it” because they have a girlfriend.

For many others, the videos seem to fuel their mental health distress.

“I’m watching these and getting sad bc i already have disappeared,” wrote one user in a video.

In the video that urged viewers to eventually return, one user commented: “wym make sure u come back? Hell na im staying away since i became a loner after losing my friends.”

The videos are even apparently making their way to TikTokers’ For You pages. “Ur on my fyp [for you page] and i think it’s a sign,” wrote another user in the video.

In one video, one user suggested they want to run away but is concerned about their family. “Talk less to your family , rarely show emotions, go outside often although I really wouldn’t recommend disappearing from your family,” another user wrote to them.

While the recent disappearance of British teenagers—aged 14 and 15—from Teesside in Northern England has not been directly linked to the trend, there is reportedly suspicion that the girls were inspired by the trend. Teesside police said it is aware of the trend, according to the Sun.

The Daily Dot has reached out to the police and will update the report if they respond.